All of the following authors were devoted to their dogs. I will give the dog's name and a brief description of the owner.

Quiz Answer Key and Fun Facts
1. Flush, a Cocker Spaniel. My owner was a Victorian poet who suffered from ill health. We lived in Wimpole Street in London. Her father did not want her to marry, but she did so anyway. Who was she?

Elizabeth Barrett Browning was a respected poet of the Victorian era. Following a lung complaint contracted when she was around 15, her health was frail and for some time she was a recluse. Flush was her loving and constant companion. She met Robert Browning in 1845 after he wrote to her expressing admiration for her 1844 volume "Poems". They married in 1846 in London, despite her father's objections. He actually objected to the marriage of every single one of his children, and disinherited each one of them on their marriage.

The newly-weds went to live in Italy, where in 1849 she gave birth to a son. She continued writing until 1860, but then her health worsened and she died in June 1861. She is buried in the English Cemetery in Florence.

Her son, Pen, did marry but had no children, so she has no direct descendents.
2. Maggie, a Bulldog. My owner was one of the great American authors. He was born in Louisiana and his output was prodigious. His work that springs most readily to mind is "Breakfast at Tiffany's". Can you name him?

Truman Capote was born in New Orleans in 1924. His short stories novels and plays are American literary classics. At least 20 films and dramas have been produced from his works, including the Audrey Hepburn film, "Breakfast at Tiffany's".

He started writing at the age of ten, and won the O. Henry short story award at the age of 19. His major work "Other Voices, Other Rooms", published in 1948, is semi-autobiographical, and was on the "New York Times" bestseller list for eight weeks, selling 26,000 copies.

He was great friends with Harper Lee and the character of Dill in "To Kill A Mocking Bird" is thought to have been based on him.

He died In Los Angeles in 1984.
3. Blemmie, a Dalmatian. My proud owner, a renowned playwright, received the Nobel Prize for Literature in 1936, and the Pulitzer Prize in 1957. His greatest play was not published until after his death. What was his name?

Eugene O'Neill was born in 1888 in a hotel room in Times Square. Starbucks now occupy the site and a plaque commemorates O'Neil's birth there. His plays dealt with pessimism and personal tragedy, possibly due to his own own depression and alcoholism. He was much honoured, receiving three Pulitzer Prizes during his lifetime, in 1920, 1922 and 1928, as well as the Nobel Prize for Literature. He died in 1953 and his masterpiece, "Long Day's Journey Into Night" was published and staged posthumously in 1957, and won him a fourth Pulitzer.

His daughter, Oona, married Charlie Chaplin when she was 18 and he was 54. O'Neill disowned her for this and never saw her again.
4. Nimrod, a Bloodhound. My owner was an author of tales of adventure, many set in his homeland of Scotland. He has a memorial and statue in Edinburgh. Can you name this author who was originally destined to become a lawyer?

Sir Walter Scott, born in Edinburgh in 1771, was a prolific historical novelist and poet, who was popular not just in Scotland and England but throughout Europe. His famous works include "Ivanhoe", "Rob Roy", "The Lady of The Lake", "Waverley" and "The Heart of Midlothian".

Born in Edinburgh, the son of a lawyer, his early training was aimed at him following his father into the legal profession, and as a young man he did make his living from the law, as a Sheriff Deputy.

His writing career did not begin until he was 25, when he translated some German ballads, followed by the publication of a set of collected Scottish ballads. Financial problems led to him writing "Waverley", which was the equivalent of the modern block-buster, and established his popularity.

He is buried in Dryburgh Abbey, which, quite fittingly, is close to a statue of William Wallace, the archetypal Scottish hero.
5. Rufus, a Poodle. My master was a Nobel Prize winning author, war correspondent, artist and politician. The greatest of Britons, most people would associate him more with the British Bulldog than a poodle. Can you name him?

Sir Winston Churchill was born in 1874. He served in the British Army, was a war correspondent in both Cuba and South Africa, held office as Home Secretary and Chancellor of The Exchequer, and led Britain as Prime Minister for most of World War II. His speeches during those troubled times were uplifting and inspiring.

After the war he was voted out of office, but returned as Prime Minster in the 1951 election.

He retired from the Premiership in 1955 and was succeeded by Anthony Eden. However, he remained a Member of Parliament until 1964.

He spent his retirement at his country home, Chartwell, in Kent. This is open to the public, along with his studio at the bottom of the garden which displays many of his paintings. He built all of the garden walls himself.

Churchill died in 1965 and was given a State Funeral, the only commoner ever to be granted such an honour in the 20th century. He is buried at Woodstock in Oxfordshire, close to Blenheim Palace, where he was born. It is a simple country church and a very simple grave for such a great man. His wife lies next to him.
6. Turk, a Mastiff. My owner wrote of Victorian times and his books have been adapted for film and television. One of his characters had a famous dog called Bullseye. Can you guess his name?

Charles Dickens was born in 1812 in Portsmouth, the second of eight children. His early years working 10 hour days sticking labels on tins of shoe polish influenced his later writings, many of which featured the onerous working conditions of those times.

His first novel "The Pickwick Papers" was published in 1836/7 in serial form, a common form of publication at the time.

His books have been made into films and television series, many of them more than once, and whilst they may now be seen as over sentimental in some areas, they remain a social commentary of working class life in Victorian times.

Dickens died in June 1870 at his home in Gads Hill in Kent. He had expressed a wish to be buried in Rochester Cathedral, but instead was given the honour of a grave in Poet's Corner in Westminster Abbey.
7. Josephine, a French Poodle. My mistress wrote a racy novel that spawned a film and a short lived TV series. You could say she was a real doll. Can you recall her name?

Jacqueline Susann was born in Philadelphia, but as soon as she graduated from school she headed to New York City determined to become an actress. She landed various bit parts in plays and commercials. In 1939 she met and married press agent Irving Mansfield who became her manager. He ensured her name was prominent in news columns and she soon became a regular on "The Morey Amsterdam Show" and landed a role in the Broadway show "A Lady Says Yes"
In 1955 she acquired both Josephine and a contract to be fashion commentator for Shiffli Lace, a role which she continued with until 1961.

In the early 1960s she turned to writing. Her first book "Every Night, Josephine" was based on her experiences with her poodle and sold well enough for her to embark on her best known work "Valley of The Dolls". The book was an instant success and has sold around 30 million copies worldwide, as well as being made into a film, with Patty Duke and Sharon Tate, which she hated, to the extent of walking out of the premiere.

Jacqueline Susann died in 1974 of breast cancer.
8. Pug, a Pug. It is fortunate for the world of books that my owner had more imagination over her books than my name. To ensure that her writing was taken seriously she published under a pen name. Do you know who she is?

Mary Ann Evans is better known as George Eliot. Her books "Silas Marner", "Mill on The Floss" and Adam Bede" are all classics of the Victorian era, but her best known work is probably "Middlemarch".

Although female authors published quite freely and openly in her era she took a male pen name because she did not want to be thought of as a writer of romantic novels. She was involved in a relationship with a married man, so the pen name could also have been an effort to shield her private life from public scandal.
9. Flossey, a Cocker Spaniel. My mistress was the youngest of three sisters, all of whom were authors. We lived in a parsonage, but we weren't the tenants. Can you name her?

Anne Bronte was the youngest of the three Bronte sisters and was somewhat overshadowed by Charlotte, who wrote "Jane Eyre" and Emily, author of "Wuthering Heights". Her literary career started with a book of poetry written with her sisters, "Poems by Currer, Ellis,and Acton Bell", published in 1846.

She wrote only two novels, "Agnes Grey" and "The Tenant of Wildfell Hall" before her life was cut short by pulmonary tuberculosis at the age of only 29.
10. Charley, a Poodle. My owner wrote about the depression years and brotherly conflict, and I featured in one of his books. Who is he?

John Steinbeck grew up in Salinas, California, which was later to be the setting for "East of Eden". Many of his books dealt with the lives and struggles of migrant workers and the working class, and he won the Pulitzer Prize for "The Grapes of Wrath". Several of his books were made into films, notably "East of Eden" with James Dean in one of his three films made before his death, and "The Grapes of Wrath" starring Henry Fonda. "Of Mice and Men" has been made into a stage play, and those who have seen it will know how powerful it is. Charley featured in the travelogue "Travels with Charley" one of his latest published works.

He was awarded the Nobel Prize for Literature in 1962.

John Steinbeck died of a heart attack in 1968 and his ashes are interred in Salinas.
Source: Author Christinap 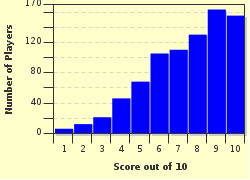 Related Quizzes
This quiz is part of series some of my favourite quizzes by Christinap:

A mixed bag of quizzes by Chris, who was the Pi in the Sky founder and leader.


1. No Henry, You Cannot Keep This as a Pet. Easier
2. Zipping up the Zips Average
3. The Servants' Quarters Average
4. The Music of Leiber and Stoller Average
5. Literary Dog Owners Average