By reading the title only you will understand what it is all about. I will give the basic information about various famous people and their countries and you just have to identify the person.

Quiz Answer Key and Fun Facts
1. This famous gentleman was born in Kentucky and was also the first American President from the Republican Party.

Abraham Lincoln was born on 12 February 1809 in Kentucky. Before becoming a politician he was a lawyer. On 4 March 1861 he became the 16th President of United States. Just four years after becoming the President he was assassinated, on 15 April 1865.
2. India - This gentleman is known as the 'Father of Nation' in India. He always believed in the importance of non-violence and truth.

He was born on 2nd October 1869 in Porbandar, Gujarat. His full name is Mohandas Karamchand Gandhi. After returning from Africa he became an active leader in India and played a major role in India's independence. Also known by the nickname Bapu.(Mahatma is an honorific title, meaning something like 'venerable').

His values have influenced many other famous persons like Nelson Mandella, Martin Luther King Jr, and many others.
3. This lady is known for her work for poor and ill children of Kolkata, India. She is also a recipient of Noble Peace Prize.

She was born in Skopje, now in the Republic of Macedonia. Her religion was Roman Catholic. She is the founder of Missionaries of Charity. She was honoured with the Nobel Peace Prize in 1979 and also Bharat Ratna in 1980. She died on 5 September 1997 in Kolkata (Calcutta).
4. This gentleman was born in Lumbini, Nepal, and is best known as the founder of Buddhism.

He is commonly known as Buddha - the enlightened one. He is said to have achieved enlightenment under the Bodhi tree. He spread Buddhism in India, Nepal, Thailand, etc. It later spread across much of South-East and East Asia.

Buddhism is arguably more of a spiritual philosophy and a code of ethics than a religion in the conventional sense.
5. This famous gentleman writer was born in England and is considered as a writer of Renaissance.

William Shakespeare was an English playwright, poet and actor. He is sometimes known as 'Bard of Avon'. His literature is famous all over the world and has been translated into many languages. Some of his works are 'Hamlet', 'King Lear', 'Othello', 'The Comedy of Errors'.
6. This English mathematician and physicist is famous for conceiving the concept of gravity, which he first thought while sitting under an apple tree.

Sir Isaac Newton was born in England on 25th December 1642. He is known for his 'Three Laws of Motion', gravitational force, calculus, etc. He died on 20th March 1727. He was held in high regard by the philolosophers of the Enlightenment.

He also took an interest in alchemy but had to keep it secret.

Newton once said of this achievements: "If I have seen further it is by standing on the shoulders of giants".
7. This Swiss tennis player is considered one of the best and for 310 weeks was ranked at No. 1.

9. This U.S. sportsman is the most decorated Olympian of all time, having won the most number of Individual Gold medal in Olympics.

Michael Phelps won the highest number of medals in the history of Olympics. He is the best swimmer in the world and also has many world records. His feet have been referred as 'fins' by media because he wears size 14 shoe. He has double jointed knees and elbows which play a role in his famous dolphin-like kick.
10. Who was the first Premier of New Zealand?

Henry Sewell was born on 7 September 1807, on the Isle of Wight, England. In 1850 he migrated with his wife Elizabeth Kittoe to New Zealand in the hope of overcoming their financial problems. After retiring from politics he returned to England, where he died on 14 May 1879.
Source: Author Smasher7 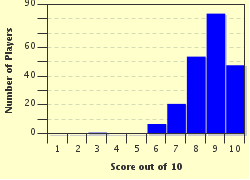 
Other Destinations
Explore Other Quizzes by Smasher7