There are roads to be explored, experienced, taken and traveled - but they all have one thing in common - a journey. So, let's see where these roads take us!

Quiz Answer Key and Fun Facts
1. I am a legendary highwayman, and while some historians doubt the story, I may have made a mad dash from London to York along the Great North Road. In 1739, I was hanged for horse theft. Who am I?

Dick Turpin was a highwayman, a horse thief, burglar and poacher whose exploits took on legendary status after his death. While it is more fiction than fact, he supposedly fled London on his mount (Black Bess) for York, covering the 200 miles in one night. His initial foray into lawlessness seems to have been his joining the Essex Gang in the 1730s, and violating the Black Act - which forbade blackening one's face for camouflage in the forest in order to poach deer. From there his criminal involvement escalated, and he met his inevitable fate - a hangman's noose in a method called 'slow strangulation' - in 1739, at the relatively young age of 33.
2. I am a doctor who was born, lived and died in Michigan, USA. Along with my brother, I invented a famous breakfast staple. In 1993 T. Coraghessan Boyle wrote a book about me titled "The Road to Wellville", and it was made into a movie the next year. Do you know who I am?

John Harvey Kellogg was a Seventh Day Adventist, and followed the religion's beliefs in a vegetarian diet, an exercise program, and abstinence from alcohol and tobacco. During his time at the Battle Creek Sanitarium (as chief medical officer), he taught classes in food preparation, promoted his beliefs about intestinal health and phototherapy, and exercised his strong beliefs in holistic medicine. Due to the conflicts between his beliefs and practiceson the one hand and those of certain members of his church on the other, in 1907 he was removed as a member of the Seventh Day Adventists. In 1894 John, and his brother Will, 'discovered' corn flakes by accident while developing a new healthy food at the sanitarium.

They left some cooked wheat out too long, but being on a tight budget, they decided to continue processing the stale wheat, and the end result was a flaky success - Corn Flakes.

Unfortunately, they had different ideas on how the recipes should be developed, and in 1906 Will started his own company - which eventually became the Kellogg Company.
3. I am a British author who was born in India. I have written hundreds of reviews, essays and editorials, but I also wrote nine novels and books - one of which is "The Road to Wigan Pier" which was published in 1937. Do you know my pen name?

George Orwell was born Eric Arthur Blair in 1903 in Motihari, Bihar, India - and died in 1950 in London, England, of tuberculosis. While he wrote in several different genres and fields, he is probably best known for 1945's "Animal Farm" and 1949's "Nineteen Eighty-Four".

His book "The Road to Wigan Pier" is an autobiography, which details the state of the working class in northern England and Orwell's own middle-class upbringing.
4. I am a British explorer, and I took part in several explorations of inland Australia. I was also the first explorer to see and name the area of Broken Hill in New South Wales, Australia - where parts of the 1981 film "Mad Max 2: The Road Warrior" was filmed. Do you know who I am?

Charles Sturt (1795-1869) participated in three expeditions in Australia, with a particular interest in exploring New South Wales' rivers. His search for an inland sea brought him disappointment, and his determination to be the first explorer to arrive at the center of Australia was foiled first by weather, and second by ill health.

There are several memorials in honor of his contributions, including a Charles Sturt University in NSW, a Sturt Highway, a suburb in Adelaide named after him, and the Sturt Stony Desert.
5. I am probably best known as a film director, but I have also delved into screenwriting, producing, and video game creation. With two others I established Dreamworks Studio - and one of my company's successes was 2002's "Road to Perdition". Who am I?

Steven Spielberg's first 'big' directorial effort was 1971's TV movie "Duel", and it was both a critical and popular success. Spielberg's resume includes some of Hollywood's biggest blockbusters - including 1975's "Jaws", 1993's "Schindler's List" and the Indiana Jones franchise.

In addition to his behind-the-camera work, he has had cameos in a number of movies. He has a star on the Hollywood Walk of Fame, and has won numerous awards - including being made an honorary Knight Commander of the Order of the British Empire in 2001, and receiving the US Liberty Medal in 2009. Steven Spielberg, David Geffen and Jeffrey Katzenberg - with a financial investment by Paul Allen - founded Dreamworks Studio in 1994.
6. I am an author who has been called an iconoclast - and a pioneer of the Beat Generation. I died at the relatively young age of 47, but during my life as a writer, I was quite prolific. I had numerous works published, including 1957's "On the Road". Do you know who I am?

Jack Kerouac (born Jean-Louis Kerouac in 1922) was at different points in his life a high school football player, a Merchant Marine, a construction worker, a sports reporter and a food server, but his lifelong need and drive was to write. He achieved a small measure of success with 1950's "The Town and City", and while he completed "On the Road" in 1951, his editor rejected the manuscript and the now famous work was not published until 1957.

Unfortunately, fame and fortune did not suit him, and his frustration and depression led him to an early grave.

He died in 1969, with his death attributed to cirrhosis, most likely caused by his heavy consumption of alcohol.
7. I am a Spanish Conquistador, and it was in large part my actions that brought about the ruin of the Aztec Empire. While I died in 1547, I have not been forgotten. In fact, I was a central figure in the 2000 animated film titled "The Road to El Dorado". Who am I?

Born in 1485 in Medellín, Spain, Hernan Cortes was a somewhat sickly boy, but he grew into a lively restless young man who became enthralled with Christopher Columbus' explorations. Intent on adventure and driven to explore, Cortes left Spain, and arrived in Hispaniola in 1504, where he set about establishing himself as a landowner and official.

As a conquistador, Cortes excelled, being both canny and ruthless, and successfully brought down the Aztec Empire.
8. I am an American writer, and while a couple of my best-known works are 1992's "All the Pretty Horses" and 2005's "No Country for Old Men", I won the Pulitzer Prize for 2006's "The Road". Do you know who I am?

While not as reclusive as J.D. Salinger, Cormac McCarthy is a very private man, and gives few interviews or public appearances. He attended the University of Tennessee, but did not graduate, and went on to write several highly acclaimed novels. In addition, he has penned short stories, screenplays and plays. He has won numerous awards, including the Pulitzer Prize, the National Book Award for Fiction, and the Guggenheim Fellowship and MacArthur Fellowship.
"The Road" was the April 2007 choice for the Oprah Winfrey Book Club.
9. I am one of the founding members of the American film studio 'United Artists' in 1919 - and my company produced and distributed the 1962 film "The Road to Hong Kong". But, despite my experiences with screenwriting, directing and producing, I was always at my best as an actor, and truly enjoyed my leading role in 1924's "Thief of Bagdad". Who am I?

Douglas Fairbanks was at one time nicknamed "The King of Hollywood", and found huge success during the silent movie era. Handsome, charming and savvy, and known for his energetic and athletic style, he was 'box-office gold', and quickly realized the potential for future profit and control. Along with Mary Pickford and Charlie Chaplin, he founded United artists as a way to retain independence from the big studios.

Unfortunately, with the advent of talkies his career fizzled, and while he remained somewhat involved in Hollywood until his death, his film career ended with 1934's "The Private Life of Don Juan".
10. I am a European explorer, and I was not the first to travel on the Silk Road, but I may be the most famous. My return to court with marvelous tales of my travels gave my fellow Venetians a glimpse into the Far East, and inspired a few others to undertake their own adventures. Do you know who I am?

An inspiration to Christopher Columbus and many others, Marco Polo began his historic adventure in 1271, and did not return for 24 years. Along with his father and uncle, he set off for Asia, traveling the Silk Road, reportedly meeting Kublai Khan, and returning with enough stories to delight entire countries. Following his return to Venice - while Venice was at war with Genoa - Marco Polo was taken prisoner, and while incarcerated he told his travel tales to a fellow prisoner.

The fellow prisoner recorded Polo's stories, and the result was the manuscript of "The Travels of Marco Polo".
Source: Author beergirllaura 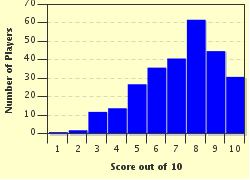 Related Quizzes
This quiz is part of series Commission #22:

Quiz-writing can be a difficult venture, more or less, but some of our brave authors opted in to receive a title in May 2012 that tested their focus. In addition to receiving a title with the word 'More' or 'Less' in the name, they were also restricted for category choices; those with a 'More' title had to use one of three categories given with the title and those with a 'Less' title had to use anything but the three categories given. The Lounge finds a way!


1. Less Than Perfect Average
2. Not a Penny Less Average
3. The More, The Merrier Average
4. Artless, Breathless, or Even Less Average
5. Less Tax, of Course Easier
6. My Less Well Known Sibling Average
7. More Rome or Me Average
8. Nothing Less Than Tragic Average
9. More Than This Average
10. Less Than Zero Average
11. Bra-Less and Fancy Free Average
12. I Need More Time! Average