I love doing FunTrivia quizzes on the Bible and geography. So I put the two subjects together and came up with a geography quiz based on events in the New Testament. This is my second installment. (The NIV was used for this quiz.)

The correct answer is Bethlehem with the birth of Christ being one of the best known stories in the Bible. Luke 2:1-7 reports the birth this way: "In those days Caesar Augustus issued a decree that a census should be taken of the entire Roman world. (This was the first census that took place while Quirinius was governor of Syria.) And everyone went to his own town to register. So Joseph also went up from the town of Nazareth in Galilee to Judea, to Bethlehem the town of David, because he belonged to the house and line of David.

He went there to register with Mary, who was pledged to be married to him and was expecting a child. While they were there, the time came for the baby to be born, and she gave birth to her firstborn, a son. She wrapped him in cloths and placed him in a manger, because there was no room for them in the inn." Bethlehem, known as the City of David, is about five miles south of Jerusalem. Notes in the New King James Study Bible state "near here Rachel was buried, Ruth gleaned in Boaz' field, David was anointed king, Jesus was born and the magi came from the east seeking a Savior."
2. In different places in the New Testament, reports are given of Jesus calming a storm on a body of water. (My favorite account is the one from Mark 6: 45-51.) What's the name of the body of water?

As soon as they got out of the boat, people recognized Jesus. They ran throughout that whole region and carried the sick on mats to wherever they heard he was. And wherever he went -- into villages, towns or countryside -- they placed the sick in the marketplaces.

They begged him to let them touch even the edge of his cloak, and all who touched him were healed."
3. In Matthew 11:20-24 and in Luke 10:13-16 Jesus pronounces woe on three unrepentant cities. Can you name them?

The correct answer is Korazin, Bethsaida and Capernaum. Luke 10:13-16 quotes Jesus as saying: "Woe to you, Korazin! Woe to you, Bethsaida! For if the miracles that were performed in you had been performed in Tyre and Sidon, they would have repented long ago, sitting in sackcloth and ashes.

But it will be more bearable for Tyre and Sidon at the judgment than for you. And you, Capernaum, will you be lifted up to the skies? No, you will go down to the depths. He who listens to you listens to me; he who rejects you rejects me; but he who rejects me rejects him who sent me" According to notes in the NIV Study Bible, Korazin "was near the Sea of Galilee, probably about two miles north of Capernaum. Bethsaida was on the northeastern shore of the Sea of Galilee. Bethsaida was rebuilt by Phillip the tetrarch and renamed it 'Julias' after Julius, daughter of Caesar Augustus, according to study notes in the NIV Study Bible.

The notes also state Tyre and Sidon were on the Phoenician coast, north of Palestine.
4. In Luke 4:16 it tells of people in Jesus' home town attempting to kill him. What's the name of his home town?

Nazareth is the correct answer. When Jesus started teaching in the synagogue, saying he is the fulfillment of Isaiah's prophecy, people became indignant and attempted to kill him. Luke 4:29-30 states: "They got up, drove him out of the town, and took him to the brow of the hill on which the town was built, in order to throw him down the cliff.

But he walked right through the crowd and went on his way."
5. John 6:59 tells of Jesus teaching in the synagogue, saying he is the bread of life. What's the name of the community in which he made this statement?

Yes, Capernaum is the correct answer. John 6:35-40 contains this famous scripture: "Then Jesus declared, 'I am the bread of life. He who comes to me will never go hungry, and he who believes in me will never be thirsty. But as I told you, you have seen me and still you do not believe. All that the Father gives me will come to me, and whoever comes to me I will never drive away. For I have come down from heaven not to do my will but to do the will of him who sent me. And this is the will of him who sent me, that I shall lose none of all that he has given me, but raise them up at the last day. For my Father's will is that everyone who looks to the Son and believes in him shall have eternal life, and I will raise him up at the last day'." Capernaum was a thriving community on the northwestern shore of the Sea of Galilee. Today it is in ruin.
6. The resurrected Jesus appeared to two people walking on a road to this town. (Luke 24:13). What's the name of the town?

The correct answer is Emmaus, about seven miles northwest of Jerusalem. (In the Greek units of the day, the distance is given as 60 stadia.) Scripture states at first the two did not recognize Jesus, and only realized who it was after he broke bread with them. In Luke 24:30-31, it states after they recognized Jesus, he disappeared from their sight.
7. John 3:23 tells of John the Baptist baptizing people at a particular place. It is here that John says Jesus must become greater and he must become less. (Some translations say Jesus must increase and John must decrease.) What's the name of the place where John made this famous statement?

Yes, Aenon, near Salim, is the correct answer apparently because there was "plenty of water" there. In John 3:36, John the Baptist also states: "Whoever believes in the Son has eternal life, but whoever rejects the Son will not see life, for God's wrath remains on him." The community is on the Jordan River.
8. Matthew 26:6-13 tells of Jesus being anointed with expensive perfume in the house of Simon the Leper. What's the name of the community?

Yes, Bethany is the correct answer. When the disciples saw the woman anoint Jesus with the expensive perfume, they became indignant saying the perfume could have been sold and the money given to the poor. Jesus, however, defends the woman's actions saying she had anointed him with perfume to prepare him for his burial. In Biblical times, Bethany was a village near Jerusalem.
9. Acts 28 tells of Paul shipwrecked on an island after a violent storm. Can you name the island?

Acts 28:1-10 tells of Paul and his group being ashore in Malta, where they were treated well. In verse 11, it states they put out to sea after three months. It is the only time Malta, an island in the Mediterranean Sea, is mentioned in the Bible.
10. To what country did Jesus' family flee to when he was two years old? (Matthew 2:13-18)

The correct answer is Egypt. Scripture states Joseph, the father of Jesus, was warned in a dream by an angel to take his wife Mary and the child to Egypt as King Herod was plotting to kill Jesus.
Source: Author Cowrofl 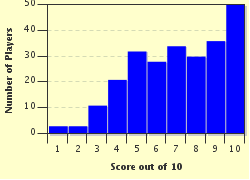