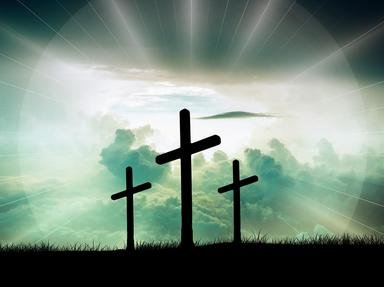 This quiz tests your knowledge of numerical information in the Protestant Bible as well as basic mathematics. Keep smiling and may God bless. David in Canada. (The KJV, NKJV and NIV were used for this quiz.)

Share on Facebook
Share on Twitter
Share by E-Mail
Author
Cowrofl
Time
4 mins
Type
Multiple Choice
Quiz #
379,860
Updated
Dec 03 21
# Qns
10
Difficulty
Average
Avg Score
6 / 10
Plays
162
This quiz has 2 formats: you can play it as a or as shown below.
Scroll down to the bottom for the answer key.

Quiz Answer Key and Fun Facts
1. What's the answer when you take the number for the Psalm known as 'The LORD is My Shepherd' (NKJV) and add on the number of chapters in the Gospel of Mark?

The Psalm known as 'The LORD is My Shepherd' is Psalm 23. Meanwhile, Mark, the shortest of the four Gospels has sixteen chapters. Take twenty-three and add on sixteen and you get our answer, thirty-nine.

Here's how Psalm 23 reads in the NKJV:

"The LORD is my shepherd;
I shall not want.
He makes me to lie down in green pastures;
He leads me beside the still waters.
He restores my soul;
He leads me in the paths of righteousness
For His name's sake.
Yea, though I walk through the valley of the shadow of death,
I will fear no evil;
For You are with me;
Your rod and Your staff, they comfort me.
You prepare a table before me in the presence of my enemies;
You anoint my head with oil;
My cup runs over.
Surely goodness and mercy shall follow me
All the days of my life;
And I will dwell[a] in the house of the LORD
Forever."

In the order the books appear in the New Testament, the Gospel of Mark is the second, appearing after the Gospel of Matthew and before the Gospel of Luke. According to notes in the New King James Version Study Bible, it is believed the author of the book was John Mark, a cousin of Barnabas.
2. What's the answer when you take the number of angels who stayed at Lot's house for an evening and add on the number of times the apostle Paul was beaten with rods? (Genesis 19:1 and 2 Corinthians 11:25)

According to Genesis 19:1 Lot met up with two angels while sitting at the gate to Sodom and invited them to his house to spend the evening with him. Meanwhile, the apostle Paul, writing in 2 Corinthians 11:25, states he was beaten with rods on three different occasions. Take two and add on three and you come up with our answer, five.

The 19th chapter of Genesis goes on to tell of the destruction of Sodom and Gomorrah by fire and brimstone because of the wickedness of the cities.

In addition to being beaten with rods on three different occasions, Paul, in 2 Corinthians 11:24-25, also tells of being whipped five times (receiving thirty-nine lashes each time), shipwrecked three times and once being stoned. In the chapter, Paul goes on to tell of being in constant danger and often being cold, hungry and exhausted.
3. What's the answer when you take the number of husbands Abigail had in the Old Testament and add on the number of people who encountered the resurrected Christ on the road to Emmaus? (1 Samuel 25:3 & 42 and Luke 24:13-15)

The correct answer is four. According to 1 Samuel 25, Abigail had two husbands -- Nabal and David. She married David after Nablal's death. Meanwhile, Scripture tells of Cleopas and an unidentified person encountering the resurrected Christ on the road to Emmaus. Take two and add on two more, and you get our answer, four.

1 Samuel 25:3 reports Abigail was a woman "of good understanding and beautiful appearance" while her first husband Nabal was "harsh and evil".

Christ's appearance on the road to Emmaus is one of a number of post resurrection appearances reported in the four Gospels. The appearance on the road to Emmaus, however, is reported only in the Gospel of Luke.
4. What's the answer when you take the age of Manesseh when he became king of Judah and subtract the number of books the apostle Paul wrote to believers in Corinth? (2 Kings 21:1)

The correct answer is ten. According to 2 Kings 21:1, Manessah became king of Judah at the tender age of twelve while two books in the New Testament are addressed to believers in Corinth. They are 1 Corinthians and 2 Corinthians.

Take twelve and subtract two and you end up with ten, our answer.

Make no mistake about it, Manasseh was extremely brutal. 2 Kings 21:16, in the NKJV Bible, states Manasseh "shed very much innocent blood, till he had filled Jerusalem from one end to another."

Verse 6 in the NIV in the same chapter states: "He sacrificed his own son in the fire, practiced divination, sought omens, and consulted mediums and spiritists. He did much evil in the eyes of the LORD..."

According to Wikipedia, the name Manasseh means "causing to forget."

Meanwhile, Corinth was a bustling city in ancient Greece. Notes in the New King James Study Bible state the city geographically "was the ideal hub for commerce between Italy and Asia."
5. What's the answer when you take the number of daughters who slept with their father Lot and multiply by the number of foolish virgins in a parable by Jesus? (Genesis 19:30 and Matthew 25:2)

The correct answer is ten. According to Scripture, Lot's two daughters got him drunk and had him impregnate them. Meanwhile, the parable by Jesus about ten virgins is found in Matthew 25 with five of the virgins being wise and five foolish.

The sordid story of Lot unknowingly impregnating his two daughters can be found in Genesis 19:30-38. The account appears immediately after Scripture telling of the destruction of Sodom and Gomorrah by fire and brimstone and Lot's wife being turned into a pillar of salt because she looked back at the destruction.

The names of Lot's two daughters are not given, but according to Scripture, the older daughter gave birth to a son named Moab and the younger to a son named Ben-Ammi.

Hezekiah was the fourteenth king of Israel, according to Wikipedia. The prophet Isaiah told Hezekiah to get his house in order "because you are going to die, you will not recover," as per 2 Kings 20:1. Hezekiah then poured out his heart to the LORD immediately after Isaiah left and Scripture reports the prophet promptly received a message from the LORD. 2 Kings 20:4-5, in the NIV Bible, states in part: "...the word of the LORD came to him: 'Go back and tell Hezekiah, the ruler of my people, 'This is what the LORD, the God of your father David, says: I have heard your prayer and seen your tears; I will heal you.'" Scripture goes on to report fifteen more years were added to Hezekiah's life.

Meanwhile, Timothy and Titus were both workers in the early church. Scripture indicates Timothy was young and timid while Titus served on the island of Crete. According to Wikipedia, Crete is the largest and most populous of the Greek islands and the fifth largest island in the Mediterranean Sea.
7. What's the answer when you take the number of chapters in Proverbs and add on the number of foundations of the wall of the New Jerusalem mentioned in the New Testament? (Revelation 21:14)

The correct answer is forty-three. There are thirty-one chapters in Proverbs and according to Revelation 21:14, the wall of New Jerusalem had "twelve foundations, and on them were the names of the twelve apostles of the Lamb."

The book of Proverbs is one of the most popular in the Old Testament. In a nutshell, the book is packed with witty sayings and many Jews and Christians believe it offers good practical advice. Most of the proverbs were written by Solomon. However, Chapter 30 was written by Agur and Proverbs 31:1-9 was written by Lemuel.

Revelation is a book that has perplexed many people for centuries, however, one of the best descriptions of the book I have heard was given by a country pastor. He described Revelation as being about the tale to two cities -- Babylon and the New Jerusalem. The citizens of Babylon face a horrific future while the residents of New Jerusalem will have a glorious future.
8. What's the answer when you take the age of Rehoboam when he became king of Israel, as per 1 Kings 14:21, and add on the number of times Paul uses the word 'love' in 1 Corinthians 13 in the NKJV and the NIV? (In 1 Corinthians 13 in the KJV, he uses the word charity, rather than love.)

According to 1 Kings 14:21, Rehoboam was forty-one years old when he became king, replacing his father Solomon. Rehoboam's mother was Naamah and his grandfather was David. Meanwhile, the word 'love' can be found nine times in 1 Corinthians 13 in the NKJV as well as the NIV. (In the KJV, the word 'charity' can be found nine times.) Take Rehoboam's age when he became king, forty-one, and add on nine and you get our answer, fifty.

According to Scripture, Rehoboam was not wise like his father Solomon, and before long Israel was plunged into a bloody civil war. The northern ten tribes broke away and Rehoboam ended up reigning over Judah in the south. (Details of his tumultuous reign can be found in 1 Kings 12.)

1 Corinthians 13 is known as 'The Love Chapter'. Incidentally, the NIV Bible contains a total of 262 words in the chapter and there can be no mistaking the stock Paul puts on love when one reads the famous chapter that is loved by tens of millions of people around the world.
9. What's the answer when you take the number of chapters in Esther and multiply by the number of books Paul addressed to believers in Thessaloniki?

Esther has ten chapters and Paul addressed two books to believers at Thessaloniki. They are First Thessalonians and Second Thessalonians. Take 10 and multiply by two and you get our answer, twenty.

The book of Esther appears in the Old Testament and it tells how a young Jewish woman ascended to become queen of a vast area ruled by Ahasuerus (in the NIV the king is known as Xerxes) and then ended up playing a key role in derailing a diabolical plan by Haman to commit mass genocide against the Jews. Esther, according to Scripture, was helped by her cousin Mordecai.

First Thessalonians and Second Thessalonians appear in the New Testament immediately after Colossians. They are followed by First Timothy and 2 Timothy. The two books were addressed to believers in Thessaloniki, also spelled Thessalonica. According to Wikipedia, Thessaloniki is the second-largest city in Greece and is a port city on the Thermaic Gulf of the Aegean Sea.
10. What's the answer when you take the number of books in the Old Testament of the Protestant Bible divided into two sections (1 Kings and 2 Kings count as one, for example) and add on the number of books in the New Testament that appear in two or more sections?

In the Hebrew Bible, the books of Samuel, Kings and Chronicles are divided.
Source: Author Cowrofl

This quiz was reviewed by FunTrivia editor looney_tunes before going online.
Any errors found in FunTrivia content are routinely corrected through our feedback system.
Most Recent Scores
Feb 07 2023 : Guest 69: 4/10
Jan 28 2023 : Buddy1: 10/10 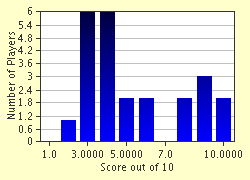 More Bible By the Numbers Quizzes