This quiz is about Hajj, a spiritual journey.

Quiz Answer Key and Fun Facts
1. There are seven rounds in Tawaf.

The seven rounds in Tawaf are done around the Ka'bah, the sacred building of Islam. There are three levels around the kabah in which you can perform Tawaf. The first level is usually the most crowded. The second level is farther away from the Ka'bah, but includes a place for people in wheelchairs to do their Tawaf.

The third level is the highest up and is done on the roof of the building that sorrounds the Ka'bah. This level is by far the emptiest of all three.
2. Which is also known as the "Tent City?"

During Hajj, you stay in Mina for many days in a large tent. The tents are air-conditioned, but can get very crowded at times.
Mina, indeed, is a "Tent City" for when you approach it, all you can see is the tops of the hundreds and hundreds of tents.
When you are at Mina, you go to Jamarat and throw stones at walls representing the devil and then come back to Mina. You do this for three nights.
3. How many nights are you supposed to stay in Arafat?

You go to Arafat from Mina, and pray Zuhr and Asr there. You should pray these two prayers combined, so you have more time to worship God. You then go to Muzdalifah to spend the night. You do not spend the night in Arafat, but in Muzdalifah.
4. When are you supposed to leave Muzdalifah?


Answer: When daylight has been wide spread

Muzdalifa is an open ground, where you spend the night. There is nothing, but dirt under you and the sky above you.
You should pray Fajr at Muzadalifa, then after daylight has become widespread, you can leave to go back to Mina. You should not leave right at sunrise, but a bit later, after the sun has completely risen. (Some infirm hajji are given a dispensation to leave immediately after Fajr, so they can have a bit of a head start on the rest of the crowd.)
5. What is Sa'e?

Sa'e is when you make seven rounds up and down the two mountains Safa and Marwa as Hajra did when looking for water for baby. Hajra is Prophet Ibrahim's wife and their child is Ismail.
6. You are allowed to cover your face in Hajj.

You are not supposed to cover your face during Hajj. Your face is also not allowed to be touched by cloth, so you must be very careful, especially when sleeping. It is all right to dab at your face with a towel, though.
7. Masjid - al - Nabawi is located in what city?

Masjid - al - Nabawi is located in the city of Medina. The masjid is very beautiful and the Prophet (PBUH) is buried here.
8. Hajj is not one of the five pillars of Islam.

Hajj is indeed one of the five pillars of Islam. The other pillars are faith in one God and His messenger, praying five times a day, fasting in Ramadan, and charity. Hajj, or the pilgrimage, is also included in these five pillars. These pillars represent what one should believe and practice to become a pure Muslim.
9. Ibrahim and Ismaeel are the two prophets that Hajj is originally traced back to.

Ibrahim and Ismail are the ones who also built the Ka'bah. They were the first ones to start this pilgrimage.
10. Zumzum is the sacred water that Muslims drink during Hajj.

Zumzum (also transliterated Zamzam) is a well that was made when Baby Ismail dug his foot into the ground and Angel Jibraeel created the well.
Source: Author ferozee 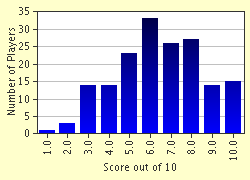 Related Quizzes
1. The Battle of Badr Average
2. Hajj and its Restrictions Tough
3. Hajj-Pilgrimage Average
4. Help! I Don't Know These Islamic Terms Average
5. Do You Really Know Islam? Easier
6. Call To Prayer Average
7. What I know about Islam and the last Prophet Average
8. Prayer: One of the Five Pillars of Islam Average
9. Isma'ili Islam Difficult
10. Islamic Calendar Average
11. The Prayer in Islam Average
12. Islam Basics Easier


Other Destinations
Explore Other Quizzes by ferozee