See if you can match each woman to the person or the event most closely associated with her. (All references are from the KJV)

Quiz Answer Key and Fun Facts
1. A woman named Gomer, (that's right, a woman) is usually associated with which of the following people?


Answer: she was the wife of Hosea, the prophet

Hosea finds his domestic life to be an accurate dramatization of the unfaithfulness of God's people in their attitude toward Him. God seems to have wanted Hosea to experience this first-hand so that he could let the people know how God felt about their "running after" false gods.

Interestingly, Hosea's name comes from the same Hebrew root word as "Joshua" and "Jesus". The name means "salvation" and as God's messenger, Hosea offers the possibility of salvation to the people, if only the nation will heed his words, abandon their idols and return to God.
2. Zipporah is associated with which man?

In Exodus 2:21, prior to Moses' encounter with God's spirit in the burning bush, Moses had been living with a man named Reuel, also known as Jethro. One of this man's daughters, Zipporah, was accepted by Moses as his wife.
3. Hagar was the mother of which man's child?

According to the 16th chapter of Genesis, Hagar, as Sarai's (Sarah's) handmaiden, had a son by her master, Abram. This son was named Ishmael, meaning "God hears."
(Later, Sarah and Abram (Abraham) have a son they name Isaac. After Sarah's death, Abraham has a wife named Keturah, and has even more children.)
4. Delilah is associated with which Old Testament figure?

Samson, who was one of the judges of Israel, had previously been married before he encountered Delilah. His marriage had ended because of a betrayal by his wife, and things went from bad to worse...

Judges 16:1 informs us what type of woman she was, and it wasn't very pretty. The problems he had experienced in his marriage were compounded in his relationship with Delilah, since she was a duplicitous, conniving betrayer. Her actions eventually cost Samson his life, but not before he avenged himself and God's people.
5. Jochebed is best known in what capacity?

"And Amram took him Jochebed his father's sister to wife; and she bare him Aaron and Moses: and the years of the life of Amram were an hundred and thirty and seven years." Exodus 6:20

While we might find marrying one's aunt distasteful by modern standards, we must bear in mind that people were less numerous a long time ago, and one was probably going to be at least distantly related to whomever they married.
The parents of Moses and Aaron also had a daughter who was a prophetess named Miriam.
6. Jezebel was the wife of which of these men?

King Ahab married an extremely wicked, evil woman named Jezebel. She was a worshipper of the false god, Ba'al, and had a truly terrible influence on her husband. He needed no encouragement, however, because he was inclined to evil ways himself. From the 16th chapter of 1 Kings all the way through the 20th chapter, we see her horrible influence in many of the evils that were perpetrated during Ahab's reign.
She was such a rotten influence that even John, who wrote the book of Revelation, made a reference back to her in his address to the church of Thyatira. (Revelation 2:18-29)
7. Which of these men was the father of a young woman named Tamar?

David's daughter Tamar, was the sister of Amnon and Absalom. In 2 Samuel 13, we see a sordid account of her brother, Amnon falling in love with her and that eventually Absalom avenges her and murders his brother, Amnon. Yet one more example of how one person's sins can affect those around them. Tamar is abused; Amnon is dead; Absalom is in hiding as a criminal; and their father's heart is broken over each one of them.
8. Rachel was the second wife of which man?

Jacob's uncle Laban, his mother's brother, deceived Jacob and caused him to labor for fourteen years in order to marry the woman he loved. Jacob loved Laban's daughter, Rachel, but Laban was determined to follow custom and marry his oldest daughter off first. Jacob worked seven years for Laban, thinking he was "earning" Rachel, but Laban presented him with Leah instead. Jacob then had to work for seven MORE years in order to marry Rachel.

It may seem only fitting that this deception took place; after all, it was Jacob (with the help of his mother), who had deceived his own father years earlier regarding his brother's birthright. Please read Genesis, chapters 25-29 to get a more complete understanding of all that transpired.
9. Naomi is often associated with which two other women?

All three of these women are mentioned in the book of Ruth. They are all left without their husbands, as all of them die. As the story progresses, we see Ruth clinging to her mother-in-law, refusing to abandon her.

At one point, Naomi even changes her own name to Mara, meaning "bitter", because of all the hardships that she has endured. Ruth remains faithful to her mother-in-law through it all, and is later rewarded with a second husband, Boaz, and a son, Obed. (Obed is the grandfather of king David.)

If you've never read the short 4 chapter book of Ruth, go ahead; try it out, there are all sorts of hidden "jewels" throughout the book.
10. Esther was the second wife of which man who ruled ancient Persia (modern-day Iran)?

Esther, whose Persian name means "star" and whose Hebrew name, Hadassah, means "myrtle", as in the myrtle tree, is the second queen of king Ahasuerus of Persia (Iran). His Greek name is Xerxes, while his Persian name is Khshayarsh. Have fun trying to pronounce that one!
Source: Author logcrawler 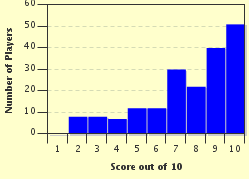