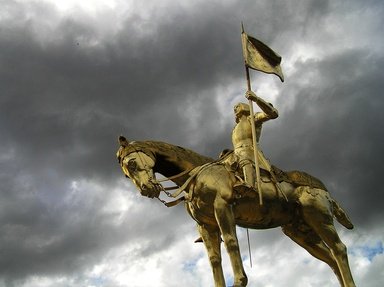 Tales of the Sword Trivia Quiz

It has been written that Joan of Arc used three swords. One was given to her by Sir Robert Baudricourt; one was taken from a Burgundian soldier. But what do you know about the third, commonly called the Fierbois sword?

Share on Facebook
Share on Twitter
Share by E-Mail
Author
ponycargirl
Time
4 mins
Type
Multiple Choice
Quiz #
390,243
Updated
Dec 03 21
# Qns
10
Difficulty
Average
Avg Score
7 / 10
Plays
281
Awards
Top 20% Quiz
This quiz has 2 formats: you can play it as a or as shown below.
Scroll down to the bottom for the answer key.

Quiz Answer Key and Fun Facts
1. Who told Joan of Arc where to find the Fierbois sword?

At her trial Joan testified that she received her first vision when she was thirteen years old while in her father's garden. Saint Catherine, Saint Michael, and Saint Margaret appeared to her at the time and told her that she had been chosen to lead the French army that would drive the English out of France and bring about a victory so that the Dauphin could be crowned king. The saints continued to "talk" to Joan and they told her where the sword was located. Joan did seem to have some sort of "inside source" that counseled her. Perhaps the best example of this is the fact that she was able to tell the Dauphin a secret that only God would know. That really gained his attention!

When asked at her trial how she knew about the sword, she stated, "I knew the sword was there because my Voices told me so...."
2. Where was Joan of Arc's Fierbois sword found?

It should not be a surprise that the Fierbois sword was found in the church of Saint Catherine of Fierbois, especially because Saint Catherine's voice was one that Joan said she heard. Joan had stopped at this church in 1429 on the way to Chinon, one of the last fortresses held by the Dauphin at the time.

At that time she finally had been granted an audience with the Dauphin, picking him out of a crowd, even though he was disguised. When he offered to provide her with a sword, she replied that she would rather use the ancient sword that had been left at the church of Sainte-Catherine-de-Fierbois.
3. According to eye witness accounts, Joan of Arc used the Fierbois sword in battle.

There is no record that Joan actually attempted to use any of her swords to harm anyone while in battle. She was mostly there to rally and support the army. While testifying at her trial, Joan made a specific point of making sure her inquisitors knew that she had never hurt anyone. There are accounts, however, that Joan used her sword to chase the prostitutes out of camp! One story is that she hit one of them so hard, it caused her beloved sword to break into pieces! It was written that the breaking of the sword was upsetting to all who knew about it, as they viewed it as a bad omen.

After the Fierbois sword was damaged Joan used one that had been taken from a Burgundian soldier. At her trial she said that she had used the "sword of Burgundian Franquet d'Arras, whom I took prisoner in the engagement at Lagny. I kept it because it was a good warsword - good to lay on stout thumps and blows with".
4. One of the legends regarding the origin of Joan of Arc's Fierbois sword is that it was used by which famous Frankish king, known as "the Hammer"?

Charles Martel was the Mayor of the Palace who led an army that stopped the Moslems at the Battle of Tours in 732. One version of the legend is that after his defeat of the Moslem army, Charles Martel actually founded the church of Sainte-Catherine-de-Fierbois, which was near Tours, and that he buried his sword there for use by the next person who was chosen by God to defend France.

Another version of the legend is that he left his sword there are an offering. This was apparently a common practice at the time; soldiers would typically leave their swords at a church as a symbol of thanksgiving to God for his help in battle.
5. Another legend regarding the origin of Joan of Arc's Fierbois sword was that it had been used by which of the following Frenchmen, a member of the House of Orléans, who was a victim of assassination?


Answer: Louis I Duke of Orleans

During the Hundred Years War Louis I came to prominence as the brother of Charles the Mad, also known as Charles VI. As the brother of the king, he probably had the strongest claim to the throne of France, however, he had a bit of a reputation as a womanizer.

When John the Fearless, Duke of Burgundy, was appointed a regent to Louis, the young son of Charles VI, his uncle, another Louis, continued to press for his own right to rule France. In 1407 Louis I Duke of Orléans was brutally assassinated by order of John, stabbed by fifteen of his men in the streets of Paris. Remember - the Burgundians were allies of the English, and they were the ones who captured Joan and turned her over to English authorities. If, in fact, the Fierbois sword belonged to Louis, it wasn't as old or sacred as people thought it was.
6. In what type of condition was Joan of Arc's Fierbois sword discovered at the time of its retrieval?


Answer: It was covered in rust.

There are differing versions regarding the recovery of Joan's sword from the church of Sainte-Catherine-de-Fierbois. During her trial she stated that an "arms merchant from Tours" went to retrieve it; there is also an account that states that she wrote a letter to the prelate of the church asking for the sword. She sent Jean de Metz, one of her men, to find it. While some sources say that it was buried behind the altar, others state that it was part of a stash of arms that had been left behind the altar in a trunk.

In Joan's own words at her trial - "This sword was in the earth, all rusty.... After this sword was found, the prelates of the place had it rubbed, and at once the rust fell from it without difficulty".
7. According to testimony given at her trial, how was Joan of Arc's Fierbois sword decorated?


Answer: It was engraved with five crosses.

During the Middle Ages blacksmiths sometimes added engravings on their work as a personal trademark or signature, so it should not be surprising the Joan's Fierbois sword was decorated. Apparently the prelates at the church were happy to allow Joan to take possession of the sword. They also sent two intricately decorated scabbards - one was made of red velvet, and the other of golden cloth. Joan had one made for herself out of a sturdy leather.

Joan stated, "...and there were upon it five crosses, and I knew it by my voices...."
8. Some accounts say that Joan of Arc lost the Fierbois sword at a battle site where she was gravely wounded. At which battle could the sword have been lost forever?

According to eyewitnesses, Joan was gravely wounded at least twice (although there are accounts which also point to more injuries) and miraculously recovered. The first time she was hit in the shoulder by an arrow during the Orléans campaign. During the Siege of Paris she was hit in the thigh with a bolt from a crossbow.

At her trial, when the inquisitors asked about her sword she replied by asking them why the whereabouts of her sword was important. It can only be assumed that they were interested in possessing such a holy relic; Joan, however, dismissed their question, "But when I was captured, it was not that sword which I had. I always wore that sword until I had withdrawn from Saint-Denis after the assault against Paris". She also stated that her brothers had what was left of her possessions. Part of the belief that the sword may have been left at Saint-Denis stems from the fact that there was/is a story that Joan left her white armor at the church there as an offering after the siege of Paris failed. If, in fact, that is the case, there is a distinct possibility that the English might have it (!) as it is written that they entered the church after she left, and stole the armor. Some sources claim that the armor that was left was the armor of a Burgundian knight.
9. At her trial, Joan of Arc testified that the Fierbois sword was her favorite possession.

Actually Joan's favorite possession was her banner; although she was never allowed to be in the midst of battle, the banner was what she used to rally the men to fight. "I loved my banner forty times better than my sword. And when I went against my enemy, I carried my banner myself, lest I kill any. I have never killed a man." Described as being 3 feet high by 12 feet, the banner was white, and decorated with lilies and the images of Saint Catherine and Saint Margaret because they told her to take up the banner. "I asked my Lord's messengers what I should do. And they answered me, saying, Take up the banner of your Lord. And thereupon I had a banner made."

Apparently what was left of Joan's original banner was burned during the French Revolution. It had been repaired many times over the years, and pieces had been replaced due to damage from moths.
10. After her death, Joan of Arc's Fierbois battle sword was found. It can be seen today at the Louvre in Paris.

Joan was questioned thoroughly about the location of her Fierbois sword at her trial, and was very emphatic that the sword has been lost. She stated that after that happened she used her Burgundian sword. There is a sword at the Musée des Beaux Arts in Dijon that some believe may have been the Burgundian sword used by Joan.

The coat of arms of France and the city of Orléans are engraved on both sides of the blade and the date of 1419 is also evident there. Some have tried to prove this was one of the swords of Joan; especially because it is smaller, it may have fit better into her hands.

Others believe that the sword was made with parts from others sometime during the 15th century.
Source: Author ponycargirl

This quiz was reviewed by FunTrivia editor looney_tunes before going online.
Any errors found in FunTrivia content are routinely corrected through our feedback system.
Related Quizzes
This quiz is part of series French History:


1. Frankly My Dear I Think You Have A Lot of Gaul Average
2. Tales of the Sword Average
3. The Messenger: The Story of Joan of Arc Average
4. The Journey of Joan of Arc Average
5. A French Connection Average
6. The Canonization of The Maid Average
7. Tales of The Maid's Relics Average
8. Napoleon's Symbols of Power Tough
9. Tales of the Bells of Notre-Dame Average
10. Who's Who: Early History of Paris Average