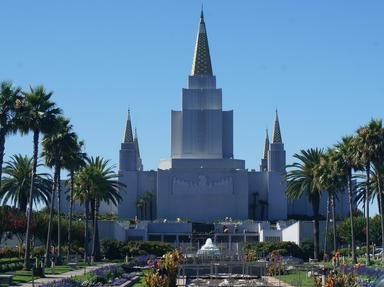 The Articles of Faith Trivia Quiz

Answer these questions about the Articles of Faith, found in The Pearl of Great Price, which is a book of scripture used by the Church of Jesus Christ of Latter-Day Saints.

Quiz Answer Key and Fun Facts
1. "We believe in God the Eternal Father and in his son, _____ _____, and in the Holy Ghost." What words are missing from Article of Faith number one?

The Church of Jesus Christ of Latter-Day Saints believes that God, Jesus and the Holy Ghost are three, separate, divine beings.
2. According to the second Article of Faith, whose transgressions, specifically, will humanity not be punished for?

Some world religions believe that men are born sinners, because of Adam's original sin. In the LDS church, children are considered innocent and free of sin until they reach the age of accountability, or age eight. After that, members are expected to repent of their sins or they will count against them in heaven. They do not have to repent for the sins of those who came before.
3. "We believe that through the _____ of _____, all mankind may be saved, by obedience to the laws and ordinances of the gospel." What words correctly complete the third Article of Faith?

The Atonement refers not only to the sacrifice of Christ on the cross, but also his prayers in the Garden of Gethsemane. In this teaching, because of his efforts, people can repent of their sins and be saved. Jesus already paid the price for these sins, so others do not have to suffer for them.
4. What are the first four principles and ordinances of the gospel as listed in the fourth Article of Faith?

"We believe the first principles and ordinances of the gospel are first, faith in the Lord Jesus Christ; second, repentance; third, baptism by immersion for the remission of sins; fourth, laying on of hands for the gift of the Holy Ghost." (Pearl of Great Price, Article of Faith 4) A fifth principle and ordinance often discussed in conjunction with these first four is "endure to the end".
5. "We believe that a man must be called of God by prophecy and by the laying on of hands, by those who are in _____, to preach the gospel and administer in the ordinances thereof." What word is missing from the fifth Article of Faith?

According to the beliefs of the Church of Jesus Christ of Latter-Day Saints, the priesthood, or authority to act in God's name, was restored to Joseph Smith and Oliver Cowdery in 1829 on the shores of the Susquehanna River, in Pennsylvania. It was restored by John the Baptist. Later, they were given further authority by Peter, James and John. Before his death in 1845, Joseph Smith had been given all the priesthood keys available.
6. Which of the following is NOT part of the LDS Church organization, as found in Article of Faith number six?

"We believe in the same organization that existed in the primitive church, namely apostles, prophets, pastor, teachers, evangelists and so forth." (Pearl of Great Price, Article of Faith 6) The Church of Jesus Christ of Latter-Day Saints is set up with a prophet at its head, assisted by 12 apostles. Further, smaller districts are presided over by bishops, or pastors. Also, patriarchs, or evangelists, are called to give individual blessing to every member that wants one. And teachers abound in the LDS Church, especially in the auxiliary organizations - the Sunday School, Relief Society, Primary, etc.
7. Which of the following is one of the spiritual gifts listed in Article of Faith number seven?

"We believe in the gift of tongues, prophecy, revelation, visions, healing, interpretation of tongues and so forth." (Pearl of Great Price, Article of Faith 7) The LDS Church abounds with tales of great healings performed with the power of the priesthood. Tales from missionaries around the world being able to speak fluently in a language they do not know are very common.

The prophet receives revelations for the LDS Church, but others have been known to prophecy or see visions of heaven.
8. In the Church of Jesus Christ of Latter-Day Saints, there are four books of scripture referred to as the standard works. In addition to the Book of Mormon, Doctrine and Covenants and Pearl of Great Price, what other scripture is part of the standard works?

The Bible is an account of the Jews, while the Book of Mormon is an account of descendants of Joseph who fled Jerusalem for the American continent in 600 B.C. The Doctrine and Covenants contains revelations given mostly to Joseph Smith in the early days of the Church.

The Pearl of Great Price contains books written by Moses and Abraham as well as a translation of Matthew and the story of Joseph's first vision and the history of how the Book of Mormon was translated. Article of Faith number eight says "We believe the Bible to be the word of God as far as it is translated correctly. We also believe the Book of Mormon to be the word of God."
9. Does the Church of Jesus Christ of Latter-Day Saints believe in continuing revelation from God?

"We believe all that God has revealed, all that he does now reveal, and we believe that he will yet reveal many great and important things pertaining to the Kingdom of God." (Pearl of Great Price, Article of Faith 9) Modern revelation is given twice each year at general conferences held in April and October, as well as monthly in the "Ensign" and "Liahona" periodicals.
10. According to Article of Faith number ten, "We believe in the literal gathering of Israel and in the restoration of the Ten Tribes; that Zion (the New Jerusalem) will be built upon the _____ continent..." Which continent correctly fills the blank?

The Church of Jesus Christ of Latter-Day Saints believes that the Garden of Eden was once located where Jackson County, Missouri is currently. This land is known by the Saints as Zion. In the last days, it is believed that a mighty city will be built there, with a temple and so forth. It is where Christ will come when he returns again.
11. The rest of Article of Faith number ten says, "...that Christ will reign personally upon the _____; and that the _____ will be renewed and receive its paradisiacal glory." What is the missing word?

Instead of just heaven and hell, it is believed in the LDS Church that there are actually three degrees of glory. The top level is called the Celestial Kingdom. It is believed that after Christ returns, the Earth will be transformed into the Celestial Kingdom, where the righteous will live with Heavenly Father and Jesus for eternity.
12. According to Article of Faith number eleven, the LDS Church does not respect any other religions.

"We claim the priviledge of worshipping Almighty God according to the dictates of our own conscience and allow all men the same priviledge, let them worship how, where or what they may." (Pearl of Great Price, Article of Faith 11) More than many other religions, the LDS Church feels strongly that everyone has a right to their own form of worship. Though missionaries are sent out worldwide to share the gospel, no one is forced to listen or believe and no one joins the LDS Church by force.
13. Based on Article of Faith number twelve, what should a church member's attitude be toward the laws of the land they live in?

"We believe in being subjects to kings, presidents, rulers and magistrates, in obeying, honoring and sustaining the law." (Pearl of Great Price, Article of Faith 12) It is important to the LDS Church that members do not break the laws of their lands, even if it means not following God's laws exactly.

Some countries have a state religion. In these countries, it is illegal to preach about other religions. The LDS Church is aware of this and does not try to force their way into nations that do not wish to allow the LDS Church to have a presence.
14. Article of Faith number thirteen refers to a famous New Testament Christian. Whose admonition are members encouraged to follow?

The final Article of Faith lists virtues and ideals that members of the Church of Jesus Christ of Latter-Day Saints strive to embody. Of course, members of any church are only human and can only strive for perfection. But the goal to be righteous is shared by almost all religions.
Source: Author bookworm78 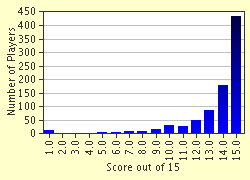 
Other Destinations
Explore Other Quizzes by bookworm78