The Creation and Fall Trivia Quiz

From the making of man to the expulsion from Eden, this quiz covers Genesis chapters 1-3.

Quiz Answer Key and Fun Facts
1. The story of the Creation and Fall is found in Genesis. What does the Hebrew title of the book mean?


Answer: In the beginning

The name "Genesis" comes from the title given to the book in the Septuagint, which was a Greek translation of the Hebrew scriptures made before Christ. The actual Hebrew title, however, simply took the first few words of the book - "in the beginning".
2. What is the Hebrew word used for God in the first chapter of Genesis?

This word "elohim", which is plural, is used in several ways throughout the Bible. For example: "For thou hast made him a little lower than the angels (elohim)" in Psalm 8:5 and "I have said, ye are gods (elohim), and all of you are children of the most High" in Psalm 82:6.
3. Everywhere the word "day" is used in the King James Version of the first three chapters of Genesis, it means a literal 24-hour period as dictated by the sun and moon.

The word day is used in Genesis 2:4, where it clearly does not refer to a 24-hour day: "in the day that the Lord God made the earth and the heavens." Since God made the heavens on the second day and the earth on the third day, the word "day" here cannot mean one 24-hour period.

However, some would argue that the word "day" must be taken literally whenever preceded by a number. The Ryrie Study Bible, for instance, says, "everywhere in the Pentateuch the word day, when used ...with a numerical adjective, means a solar day".
4. Genesis 1:21 says, in the King James Version, that God created "great whales". How has the word "whales" been interpreted by Bible scholars?

Bible Scholars have suggested all of these possibilities. The same word translated "whales" here is used to describe the dragon in the Ezekiel's prophecy. (According to "The KJV Parallel Bible Commentary". Hindson, Edward E., and Woodrow Michael Kroll, eds.)
5. When God says, "Let us make man in our image", why do some Bible scholars say he is using the plural?

There are some Bible scholars who have argued each of these points. Some liberal scholars argue that the use of "us" here reveals a primitive, polytheistic concept in pre-Israelite tradition; the conservative Christian interpretation is that "us" here implies the Trinity.

Another and simpler possibility is that God is using a sort of "royal we"; Kings and Queens often speak in the second person plural when referring to themselves.
6. The very first command given to man was:


Answer: Be fruitful and multiply.

Genesis 1:28 says, "And God blessed them, and God said unto them, Be fruitful, and multiply". The command not to eat of the Tree of Knowledge of Good and Evil comes later, in Genesis 2:9.
7. What did God give to man for food in the first chapter of Genesis?


Answer: herbs and the fruit from trees

Genesis 1:29 - "And God said, Behold, I have given you every herb bearing seed, which [is] upon the face of all the earth, and every tree, in the which [is] the fruit of a tree yielding seed." God did not give man explicit permission to eat meat until after the flood: "Every moving living thing that liveth shall be meat for you; even as the green herb have I given you all things". (Gen. 9:3)
8. The name Adam comes from the Hebrew word 'adama', meaning what?

Because this is the name given for the first human in Genesis, it is also understood to mean human. In Genesis 1:26, the word 'adam' is used, and is usually translated as man, standing for all of humankind. Elsewhere, 'ha-adam' is usually used, and is translated as the man, or by the name Adam.
9. When God created Eve, what does He say He is making for Adam, according to the King James Version?

The Hebrew term translated "help meet" in the King James Bible signifies power and strength; one scholar translates Genesis 2:18 as "I will make a power [or strength] corresponding to man." (Kaiser, Walter C., Jr., et al. "Hard Sayings of the Bible.") Lawrence Richards in "The Bible Reader's Companion" says that the same word is used to describe God as man's helper.
10. Thomas Aquinas concluded that "man and woman should be conjoined as allies" because Eve was created from Adam's ___."

Anglican poet and minister John Donne points out in a 1620 sermon that woman "was not taken out of the foot to be trodden upon".
11. Why did Adam eat the forbidden fruit that Eve offered him?

Despite John Milton's portrayal of Adam in "Paradise Lost", the Bible nowhere implies that Adam ate because he loved Eve and wanted to share in her fate. It does not tell us why he ate. It says only: "And when the woman saw that the tree [was] good for food, and that it [was] pleasant to the eyes, and a tree to be desired to make [one] wise, she took of the fruit thereof, and did eat, and gave also unto her husband with her; and he did eat." (Genesis 3:6)
12. According to Paul, was Adam deceived when he ate of the fruit?

Paul says: "And Adam was not deceived, but the woman being deceived was in the transgression". (I Timothy 2:14)
13. Why did Adam say he was afraid when he hid from God after eating the forbidden fruit?


Answer: Because he was naked

"And he said, I heard thy voice in the garden, and I was afraid, because I [was] naked; and I hid myself." (Genesis 3:10)
14. Whom does Adam say gave him the forbidden fruit?

Some Bible interpreters argue that Adam is thereby blaming Eve for his sin and even indirectly blaming God: "And the man said, The woman whom thou gavest [to be] with me, she gave me of the tree, and I did eat." (Genesis 3:12)
15. Who did Eve blame for making her eat the forbidden fruit?

"And the LORD God said unto the woman, What [is] this [that] thou hast done? And the woman said, The serpent beguiled me, and I did eat." (Genesis 3:13). It is interesting to note that Adam and Eve blame others, and that they do not confess and repent of their sin.
16. How was the serpent cursed for deceiving Eve?

"And the LORD God said unto the serpent, Because thou hast done this, thou [art] cursed above all cattle, and above every beast of the field; upon thy belly shalt thou go, and dust shalt thou eat all the days of thy life: And I will put enmity between thee and the woman, and between thy seed and her seed; it shall bruise thy head, and thou shalt bruise his heel." (Genesis 3:14-15)
17. What do Christians considered to be the first messianic prophecy in the Bible?

For the Christian, messianic prophecies are those prophecies that say something about Christ, the Messiah. Christians see this as a prophecy of Christ's crucifixion and His destruction of Satan: "And I will put enmity between thee and the woman, and between thy seed and her seed; it shall bruise thy head, and thou shalt bruise his heel."
18. What was Eve's punishment for eating the forbidden fruit?

"Unto the woman he said, I will greatly multiply thy sorrow and thy conception; in sorrow thou shalt bring forth children; and thy desire [shall be] to thy husband, and he shall rule over thee." (Genesis 3:16)
19. How was Adam punished for his sin?


Answer: He would have to till the ground with exertion.

Genesis 3:17-18 says, "cursed [is] the ground for thy sake; in sorrow shalt thou eat [of] it all the days of thy life; Thorns also and thistles shall it bring forth to thee; and thou shalt eat the herb of the field; In the sweat of thy face shalt thou eat bread, till thou return unto the ground."
20. Why did God say He sent Adam from the garden?


Answer: Because the man had become as Him

Genesis 3:22-23 says, "And the LORD God said, Behold, the man is become as one of us, to know good and evil: and now, lest he put forth his hand, and take also of the tree of life, and eat, and live for ever: Therefore the LORD God sent him forth from the garden of Eden, to till the ground from whence he was taken." This murky phrasing has given rise to much debate among Bible scholars. What does God mean when he says the man has become "as one of us?" No consensus has been reached.
21. What did God place cherubims and a flaming sword to guard?


Answer: The Tree of Life

"So he drove out the man; and he placed at the east of the garden of Eden Cherubims, and a flaming sword which turned every way, to keep the way of the tree of life." (Genesis 3:24). As we can see from the quotation in the previous question, God did not want man to eat of the Tree of Life and live forever, so He guarded it from them.

Some see this banishment as an act of mercy. God is here saying that if Adam and Eve eat from the tree of life, they will become immortally fixed in a fallen state. To prevent that tragedy, God banishes them from the presence of Eden, and puts into motion his plan for Redemption.
22. Do the animals appear (in the scriptures) before or after man?


Answer: It depends on the chapter.

In Chapter 1, animals are created before man, but in Chapter 2, they are created after. Some scholars argue that two different stories of creation were circulated in oral tradition, and both were ultimately recorded in the Bible. Fundamentalists dispute this interpretation and argue that the two accounts can be reconciled; Chapter 2 simply provides a more detailed view of the events sketched in Chapter 1.
23. According to the King James Version, the earth was "without form and ___."

The KJV says "void", but the NIV says, "Now the earth was formless and empty".
24. Which day did God bless and sanctify? 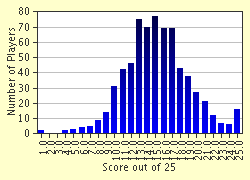 Related Quizzes
This quiz is part of series Bible Themes:

My quizzes on various themes from the Bible. (Quizzes not on specific books of the Bible or specific characters.)