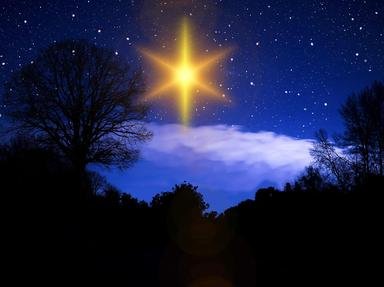 Many of the details associated with the celebration of Christmas come from non-canonical traditions. This quiz looks at the Infancy Narratives found in the Gospels (King James Version).

Quiz Answer Key and Fun Facts
1. Only two Gospels include any details about the birth of Jesus. Which of them starts with a genealogy to establish that Jesus is the Messiah to whom Old Testament prophecies referred?

Contemporary theologians generally agree that the four Gospels were written for four different audiences, leading to differences in emphasis and detail. Mark (whose Gospel was probably the first one written) wrote for a Roman audience, and used a terse style while emphasizing the power of Jesus. Matthew's Jewish audience had a tradition of expecting a Messiah; Luke wrote for Greeks, and John for those interested in the spiritual, rather than the objective, aspects of Jesus' life.

Mark and John both start their accounts with John the Baptist baptizing the adult Jesus. The first chapter of Luke is devoted to the story of the pregnancies of Elizabeth and Mary, while Matthew establishes the credentials of Jesus as the Messiah predicted in a number of Old Testament sources, including the prophets Isaiah, Micah and Jeremiah. (Matthew 1:1-17)
2. John the Baptist is often referred to as Jesus' cousin. Which of them was the older one, according to Luke?


Answer: John the Baptist, by about six months

The angel Gabriel, who informed Zacharias that Elisabeth would bear a son to be named John and subsequently announced to Mary her forthcoming impregnation by The Holy Ghost, is one of the only two angels for whom the Bible gives a specific name.

According to Luke (1:36), Elisabeth had been unexpectedly (because of her advanced age and previous barrenness) pregnant for about six months when her much-younger cousin Mary arrived to visit and share their news.

The events described in the first chapter of Luke are incorporated into a number of prayers: 'Hail Mary' includes both the words used by Gabriel to Mary, and Elisabeth's greeting to Mary. 'Magnificat' is based on Mary's response.
3. According to the Gospel of Luke (KJV), why did Joseph have to travel to Bethlehem?


Answer: Caesar Augustus levied a tax to be paid in his ancestral home

Some translations use the term census, as the event was a combination of census and tax-levying. It may refer to the census which took place at the instruction of Publius Sulpicius Quirinus (called Cyrenius by Luke) in 6 CE, although the date is inconsistent with other references, such as the reign of Herod, who died in 4 BCE. According to Luke, the Roman census imposed when they took control of the region required everyone to register at the venue designated for their family, so Joseph, being descended from David, had to go to Bethlehem, the City of David. Most authorities do not consider this historically accurate, as the Romans did not usually impose such disruptive requirements when they took control. However, Luke used it as a way of providing an explanation of the birth in Bethlehem, as predicted by the Old Testament prophet Micah.

It is not clear why he was accompanied by Mary, since the journey would have been arduous for a woman nearing the time of the expected birth of her first child.

"And it came to pass in those days, that there went out a decree from Caesar Augustus, that all the world should be taxed. (And this taxing was first made when Cyrenius was governor of Syria.) And all went to be taxed, every one into his own city. And Joseph also went up from Galilee, out of the city of Nazareth, into Judaea, unto the city of David, which is called Bethlehem; (because he was of the house and lineage of David) To be taxed with Mary his espoused wife, being great with child." (Luke 2:1-5)
4. According to Luke, where did Mary place Jesus to rest after his birth?


Answer: In a manger

According to Luke, there was no room at the inn, so Joseph and Mary took shelter in the stable, where a manger provided a useful place to lay a newborn child. It is interesting to note that the Greek word translated as 'inn' can also mean guestroom. Some scholars speculate that Joseph and Mary may have intended to stay with members of his family, but found their house to be overcrowded.

Several non-canonical writings refer to the birth of Jesus as having taken place in a cave, and the Church of the Nativity in Bethlehem was built in the 4th Century over a cave that was held to be the site of the birth.

"And she brought forth her firstborn son, and wrapped him in swaddling clothes, and laid him in a manger; because there was no room for them in the inn." (Luke 2:7)
5. According to Luke, an angel delivered the news of Jesus' birth to some nearby shepherds. Was this angel identified as Gabriel?

Luke does not identify the single angel who delivered the initial message, but says that their initial response to the sight of an angel was fear.

"And the angel said unto them, Fear not: for, behold, I bring you good tidings of great joy, which shall be to all people. For unto you is born this day in the city of David a Saviour, which is Christ the Lord. And this shall be a sign unto you; Ye shall find the babe wrapped in swaddling clothes, lying in a manger. And suddenly there was with the angel a multitude of the heavenly host praising God, and saying, Glory to God in the highest, and on earth peace, good will toward men." (Luke 2:10-14)

Thus reassured, they went into town to verify the angel's message, and started spreading the word.
6. Luke's account of the infancy of Jesus moves quickly from his birth to his circumcision and naming. As stipulated by Jewish law, how long after his birth did Luke say this happened?

The Brit milah (or, as may be familiar to many, what is called in Yiddish the Bris) is a ceremony that includes circumcision (as a token of the covenant established with Abraham in Genesis 7:13) and naming of the infant. This ceremony commonly takes place on the eighth day of the infant's life, as prescribed in Leviticus 12:3. In many Anglican churches, the Feast of the Circumcision is celebrated on January 1; in the Eastern Orthodox church, it is on January 1 of the Julian calendar, which is January 14 on the Gregorian calendar; the Roman Catholic church, however, celebrates the Feast of the Holy Name of Jesus on January 3, having moved the date from January 1 (which is now celebrated as the Feast of the Holy Mother of God).

"And when eight days were accomplished for the circumcising of the child, his name was called JESUS, which was so named of the angel before he was conceived in the womb." (Luke 2:21)
7. Matthew (2:1-2) describes the visit of three magi, guided by the Star of Bethlehem on their journey.

Matthew does not specify the number of magi, but they are popularly thought to be three in number, because he does specifically list three gifts which they brought with them: gold, frankincense and myrrh. The word used to describe these visitors can be variously translated as astrologers, priests or wise men, and they are often portrayed as kings. You may be familiar with the names traditionally associated with them: Caspar (from Persia), Melchior (from India) and Balthazar (from Babylon). Some traditions have different origins, including the possibility of Yemen for one or more of them. Matthew simply says there were magi who came from the east - the rest of the details come from other sources.

"Now when Jesus was born in Bethlehem of Judaea in the days of Herod the king, behold, there came wise men from the east to Jerusalem, Saying, Where is he that is born King of the Jews? for we have seen his star in the east, and are come to worship him." (Matthew 2:1-2)
8. According to Matthew, how did King Herod first react to the news that Jesus had been born to be King of the Jews?


Answer: He asked the wise men to let him know when they had found the baby

Matthew portrays Herod as both crafty and wicked - he pretends to share the joy of the wise men, and enlists their help to work out where this King of the Jews (a title which he held, so clearly someone who was seen as a threat to his power) could be located. However, they were warned by God not to return to Jerusalem with the details, and Joseph was likewise warned to get out of town quickly to avoid Herod's subsequent slaughter of all boys under two years of age anywhere near Bethlehem. Once again, these events may not be historically accurate, as this Massacre of the Innocents is not reported by historians, only by Matthew and writers basing their work on his account.

"Then Herod, when he had privily called the wise men, enquired of them diligently what time the star appeared. And he sent them to Bethlehem, and said, Go and search diligently for the young child; and when ye have found him, bring me word again, that I may come and worship him also. ... And being warned of God in a dream that they should not return to Herod, they departed into their own country another way. And when they were departed, behold, the angel of the Lord appeareth to Joseph in a dream, saying, Arise, and take the young child and his mother, and flee ... Then Herod, when he saw that he was mocked of the wise men, was exceeding wroth, and sent forth, and slew all the children that were in Bethlehem, and in all the coasts thereof, from two years old and under, according to the time which he had diligently enquired of the wise men." (Matthew 2:7-8, 12-13, 16)
9. Many nativity scenes show the shepherds and magi worshiping Jesus in a stable. Where does Matthew say the baby was when the magi arrived to see him?


Answer: In a house

As can be deduced from the fact that Herod subsequently ordered the execution of all boys under two years of age, the magi did not arrive at the time of Jesus' birth, but quite a while later, by which time they were in more standard accommodation. (When I was young, my mother used to set up the family creche with no occupants in the stable on the first day of Advent. Mary and Joseph made their way through the house, moving along window ledges and across tables and bookshelves, to arrive on Christmas Eve. The Magi started their trip on Christmas, arriving on January 6, the Feast of the Epiphany, which commemorates their arrival.)

"And when they were come into the house, they saw the young child with Mary his mother, and fell down, and worshipped him: and when they had opened their treasures, they presented unto him gifts; gold, and frankincense, and myrrh." (Matthew 2:11)
10. When Joseph was warned that his family was in danger from King Herod, where did he take them for safety, according to Matthew?

It was convenient for Matthew to get the family to Egypt, as it helped provide another link to Old Testament Messianic prophecy (Hosea 11:1). Matthew also relates that, after the death of Herod, they returned to Israel, but not to Bethlehem. Instead, they settled in Nazareth, in order to fulfil yet another prophecy, that the Messiah would be a Nazarene (Matthew 2:23). Luke's version of the Infancy Narrative has the family originate in Nazareth, and contains no mention of the flight to Egypt.
Source: Author looney_tunes 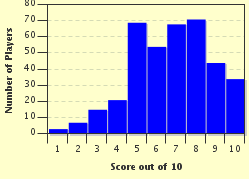