That's not the only way to enjoy this nutritious and versatile nut, as you will see here!

Quiz Answer Key and Fun Facts
1. There you are, trying to select the best chestnuts from the market stall to roast this evening. Which of these would be your best choice?


Answer: The ones that yield slightly when squeezed

Unless you plan to store them before use, the ones that were picked today will be a poor choice, as chestnuts generally need to ripen for a week or more in a cool spot after they have been picked. During this time, the starch content is converted to sugars, and the water content reduces.

The unripe fruit will be rock hard, and will not have as good a taste as it will after ripening. However, if the ripening chestnuts are left too long, they become sugary, and will have a poor texture - by the time they feel soft when squeezed, they are overripe. Chestnuts should never be frozen before cooking!
2. Which of these statements about chestnuts is FALSE?


Answer: Chestnuts have more calories/kilojoules by weight than any other nut

Unlike most nuts used as food, chestnuts have very little protein or fat, but do have a lot of starch and sugar (the balance of which changes during ripening). Fresh chestnuts have about 800 kJ per 100g, which is less than a third of that found in other nuts such as walnuts and almonds.

Their high carbohydrate content means they are often grouped with wheat, rice and potatoes as starches when considering dietary balance. Raw chestnuts have a high tannin content, which makes them bitter, and can cause indigestion; for this reason, some authorities recommend that they should not be eaten raw.

However, others disagree, especially because raw chestnuts have a high vitamin C content (100g provides over half the USRDA), which is decreased to nearly half that value during cooking.
3. You've got your chestnuts, but no open fire on which to roast them. All of these except one are acceptable substitute cooking methods that will allow you to enjoy the hot nuts when they are done. Which is the odd one out, as it really only prepares the chestnuts to be pureed or preserved?

You can also cook them on a barbecue - if you have a charcoal barbecue, you can get the closest thing to fire roasting. Microwave ovens produce a quick result, but must be used carefully, as overcooking them will give a mushy product similar to that resulting from boiling, and the nuts will not make good eating unless you want to puree them. Chestnuts that are going to be used as an ingredient in preparing more complex dishes may be boiled, since they are likely to be diced or pureed before further cooking.
4. What step is important to complete in preparing your chestnuts for roasting?

Chestnuts have a high water content, and may explode as steam is produced inside the shell during cooking - like popcorn, but much messier as the contents spray everywhere! To prevent this, you need to cut through the shell to allow the steam to vent. Some people like to make a slit along the curved surface, others prefer to make a cross-shaped cut on the flat end. Either method will help you split the shell after cooking so that you can remove it and peel the inner skin (properly called the pellicle), which is bitter and not eaten by most people unless the chestnuts are being used for some special recipe that calls for keeping the skin in place.

Once you have cooked your chestnuts, you may want to eat them (or use them in some dish) immediately. If not, they should be kept in the refrigerator and used within three days or so. Longer term storage in the freezer will keep them for up to nine months; the defrosted product is not really suitable for snacking, but can be used in other ways!
5. I have decided to make chestnut stuffing for my Christmas turkey this year. Should I just fill the cavity with as many chestnuts as will fit?

The chestnut is used as a flavoring ingredient for the stuffing, which usually has a starchy base such as bread or rice to absorb liquid from the turkey as it cooks, and allow the flavours to mix. The chestnuts need to be cooked and chopped, and then may be fried with onion and your chosen herbs before being mixed with the bread cubes (or bread crumbs or rice or whatever) to produce the stuffing.

This mixture is then packed loosely into the bird's cavity, to allow it to swell as it cooks. There are zillions of creative recipes for other additions to your stuffing - I love chestnut and cranberry stuffing; for a Greek flavor, try chestnut, pine nut, lemon and minced lamb instead of a bread stuffing. Of course, you can stuff not only all kinds of poultry, but also other meats, or vegetable marrows, pumpkin, grape leaves - go for it!
6. Instead of cooking your chestnuts for immediate use, you might decide to dry them and grind them into flour. How long can you keep chestnut flour on the shelf without worrying about a deterioration in its quality?


Answer: Only a few weeks

Chestnut flour has a disappointingly short shelf life (which is why it is hard to find for a lot of the year). While chestnuts are in season, they can be dried and ground to produce a flour which is used as a flavor additive (not on its own) in producing dough for bread, biscuits/cookies, pastries, even doughnuts and pancakes.

It also makes an interesting thickening agent for soups, introducing a sweet nutty taste that goes well in, for example, pumpkin soup.
7. Which of these drinks is sometimes given an unusual twist in flavor from the addition of chestnut puree during its preparation?

Some commercial manufacturers even produce instant coffee with chestnut flavoring! For the gluten-intolerant, ground chestnuts can be used on their own as a coffee substitute - but it will be caffeine-free, too, and I would consider it an alternative to coffee, not a substitute.

At any rate, it has a sweet nutty taste that makes an interesting hot drink, either on its own or mixed with coffee.
8. Marrons glaces is a French confectionery that is basically candied chestnuts.

'Marrons' is the French name for the larger (and more easily peeled) chestnuts that are used for this dish, as opposed to the smaller ones called 'chataignes'. Fresh chestnuts are blanched before having their skin removed. They are then covered with sugar syrup, and allowed to stand overnight.

The mixture is briefly boiled again, and allowed to stand for another day. This process is repeated until all the syrup has been absorbed. Different recipes then have a variety of ideas about what happens next.

Some say that they are now ready to use served on ice cream or topped with whipped cream. Others suggest baking in a single layer in the oven until the outside crisps, producing a crunchy glaze. They may also be iced before being sold in a confectioner's.

The sugar content is an excellent preservative, and the candied chestnuts can be kept for up to a year.
9. The movie 'Amadeus' featured a dish called Capezzoli di Venere (Nipples of Venus). With what is chestnut puree mixed to produce this truffle treat?

The chestnuts are prepared by being soaked in a brandy/sugar syrup (or, if you are using tinned chestnuts, by adding brandy to them) and then being pureed. A chocolate ganache is then mixed in, and the truffles are formed into the desired shape. (Traditionally, this resembles a human breast; spheres taste just as nice, without the sexual overtones.) They are coated with white chocolate.

The addition of a chocolate bit to represent a nipple is purely optional.
10. What name is given to the French dessert made from pureed chestnuts topped with whipped cream, and presented so as to resemble a mountain?

'Monte Bianco' is the Italian name for this dish, made from sweetened pureed chestnuts. In Switzerland, chestnut puree is flavored with kirsch, then formed into spaghetti-shaped pieces, which are placed in the centre of the plate and decorated with whipped cream to create the dish called 'vermicelles'. Hungarians prepare 'gesztenyepure' (literally just meaning chestnut puree) by mixing the chestnut puree with such ingredients as sugar, cocoa and/or rum, then forcing it through a ricer to produce short strands similar to 'vermicelles'. Again, whipped cream is a traditional accompaniment, and possibly glace cherries.
Source: Author looney_tunes 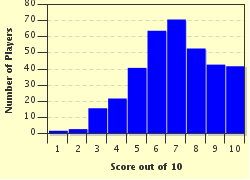