An Inside Look at Personality Traits Quiz

Psychologists have many terms to describe enduring features of human personality, known as traits. Many different models of personality traits exist. See how well you can identify some of these terms.

Quiz Answer Key and Fun Facts
1. One of the most well known models of personality traits is called the "Big Five", which identifies five broad super-traits useful for understanding personality. Which of the Big Five personality factors is associated with curiosity, artistic interests, and liberal values?

Openness to experience, as the name suggests, is concerned with one's receptivity and liking for new and unfamiliar things. Artists and scientists tend to be high in openness. The Big Five factor missing from the four answers is called conscientiousness.
2. An alternative model to the Big Five, proposed by Hans Eysenck, consists of only three major factors. Which of the following traits does not form part of Eysenck's model of personality?

Sensation-seeking concerns one's desire for stimulation and novelty. This trait does not seem to fit in neatly with either Eysenck's model or the Big Five. Eysenck argued that agreeableness and conscientiousness from the Big Five are components (at the low end) of a broader trait he called psychoticism, which refers to a general tendency to disregard social norms. Eysenck did not think that openness to experience was really a personality trait at all, as he thought it represents an aspect of cognitive ability.
3. Which of the following traits does NOT form part of the "dark triad" of antisocial traits?

The "dark triad" is a name coined to refer to a trio of traits associated with antisocial and offensive behaviour. Psychopathy refers to disregard for the rights of others. Narcissism refers to a grandiose sense of one's importance and superiority to others. Machiavellianism refers to willingness to manipulate others for one's own self-aggrandisement, and is named after philosopher Niccolň Machiavelli, who advocated political ruthlessness. People who show high levels of honesty and humility tend to be low in all the dark triad traits.
4. Which of the Big Five personality factors has been most strongly linked with having any mental disorder?

The name of this trait provides a clue, as it refers to one's tendency to be neurotic, i.e. emotionally disturbed. Extraversion and conscientiousness tend to have a positive influence on mental health, whereas openness to experience tends to be more neutral.
5. Robert Cloninger developed the Temperament and Character model of personality as an alternative to the Big Five. Which trait in this model is linked with spiritual ideas such as experiencing a sense of oneness with the universe?

The name of this trait provides a clue, as many spiritual traditions talk about transcending the boundaries of the individual self in order to have an experience of being part of a greater reality. Cloninger's model features four "temperament" traits, thought to be inborn, and three "character" traits, thought to be shaped by experience. Self-transcendence is considered to be one of the character traits, along with cooperativeness and self-directedness.
6. What trait concept was developed to help understand individual differences in hypnotic susceptibility?

Absorption is defined as a person's tendency to experience episodes of "total attention" when they seem captured by some stimulus, whether internal or external. Feelings of absorption can occur in response to beautiful music, a sunset, or deep meditation for example. People prone to absorption tend to respond to hypnosis more readily than others. Absorption is related to fantasy proneness, but the latter concept was not developed to help understand hypnotisability. Schizotypy refers to a person's tendency to have peculiar experiences that resemble mild symptoms of schizophrenia or psychosis. Need for cognition refers to enjoyment of intellectual activity.
7. Timothy Leary, the Harvard psychologist who later became notorious for his involvement in LSD research, was a pioneer in the development of what personality model?

The interpersonal circumplex refers to a set of traits describing how a person relates to other people, such as whether a person is generally dominant versus submissive, and warm versus cold. Timothy Leary wrote an influential book about this subject in 1957 called "Interpersonal Diagnosis of Personality" while he was still a respectable psychologist.
8. Which trait has been proposed in recent years as a sixth factor of personality in addition to the more well-known Big Five?

In the last decade or so, some psychologists have argued that the traits comprising honesty and humility together form a major dimension of personality that is distinct from the other more well-established Big Five factors.
9. Since the 1960s, claims have been made that psychedelic drugs have mind-expanding or mind-opening properties. In a widely publicised 2011 study, volunteers who had never taken psychedelics before were administered the drug psilocybin, the active ingredient in "magic mushrooms". A follow up performed 14 months later found that they had undergone a sustained increase in what major personality factor?

This finding was published in a paper called "Mystical experiences occasioned by the hallucinogen psilocybin lead to increases in the personality domain of openness." Participants were assessed on all of the Big Five traits before taking the drug and again 14 months later. Openness to experience was the only personality factor that changed significantly, suggesting that psilocybin may well indeed be "mind-opening." The term "Freakiness" I just made up! Authoritarianism was not assessed in this study, but tends to be associated with low levels of openness to experience.
10. What personality trait is most strongly and consistently linked with academic and occupational performance?

Conscientiousness is associated with self-discipline and achievement motivation. Highly conscientious people work hard to achieve their goals and so tend to earn higher grades at school and to be rated as better workers by supervisors than less conscientious people, who may be more laid back but have lower standards. "Conservation" is not an actual personality trait as far as I know.
Source: Author agentofchaos 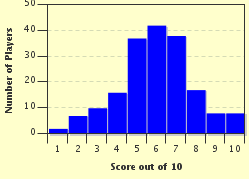 Related Quizzes
This quiz is part of series My Psych Quizzes:

Quizzes I have written about some aspect of the fascinating topic of human psychology.


Other Destinations
Explore Other Quizzes by agentofchaos