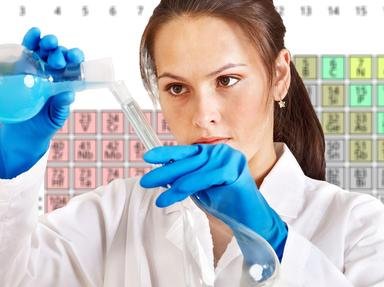 Chemical elements and compounds often have 'meaningful' names such as hydrogen (begetter of water). Other names refer to celebrities, countries, regions, or even universities. See if you can identify where these are from.

Quiz Answer Key and Fun Facts
1. The discoverer of gallium (Ga) gave that element the name of his own 'home-area'. Which one was that?

Paul Emile Lecoq was a Frenchman. His name itself indirectly refers to France as the cock ('gallus' (in Latin)) is the national symbol. Another French chemical element is francium(Fr). There is also a lutetium (Lu) after Lutetia (= Paris). Other examples are Germanium (Ge) and Rhenium (Re). From Magnesia, a district in Thessaly, came two names of elements: Magnesium (Mg) and Manganese (Mn). Elements 97 (berkelium) and 98 (californium) are as recent as 1949 and 1950 and were synthesized at, and named after, the University of California.
2. Bromine got its name from the Greek word bromos. What does it mean?

Arsenic (As) got its name from the Greek arsenikhos, which means 'strong'. Bromos means 'strong smelling', so stench is the correct answer.
3. Nickel got its name after a German word for a mischievous demon who was supposed to have created a "false copper ore". Which of these was also named after a German word for a gnome or evil spirit of the mines?

Alumen is Latin for bitter salt. Ferrum is iron in Latin. Cobalt is from the German kobold. The history behind the word nickel is more complicated. Its German discoverer was looking for copper and disappointedly called the ore he had found kupfernickel, or copperdevil. Nickel is originally a derivation of the German Nicholaus. Just as the English "Old Nick", German Nickel, a diminutive of Nick, became a name for a devil, demon, or similar bad spirit.
Middle Dutch has a similar word for the devil: necker.
4. Chromium (Cr) literally means 'coloured element'. The name of rubidium (Rb), which was discovered by the inventor of the Bunsen burner, Robert W. Bunsen, also refers to colour. What colour?

As in ruby, the red-coloured precious stone, or in rubicund. Also found in rubric, meaning the heading of a division of a book, marked in red. The metal itself is silver/white, but the name was chosen based on the red lines seen in its emissions.
5. Chemistry is a much more colourful subject than people might think. Chlorine is also related to a colour word. What colour?

Chlorine might be called either greenish-yellow or yellowish-green. Fluorine(F) is not colour-related, but means 'flowing'.
6. Names based on countries or continents are frequent, such as europium or polonium. Mythological names also pop up in chemical terms. What is the name "ammonia" derived from?

Ammon is in Libya. Neither the Greek goddess Ammonia nor the Egyptian God Am(m)on is directly related to ammonia, although it was first discovered near the temple of Amon in Libya. Correct examples of derivations from gods or goddesses are thorium after the Norse god of thunder and uranium after Uranus.
7. Which of these elements got its name from the Greek for 'hidden'?

Lanthanum got its name from C.G. Mosander who, feeling that the element had long 'escaped notice', called it the 'hidden or latent one', from Greek lanthanein.
8. Lithium is related to Greek lithos , and means which of these?

Carbonum, which is what diamonds consist of, means coal. A soft form of carbon is graphite: stone you can write on. Lithography means 'written in stone'. Brimstone is an altogether different type of stone and is called sulphur or sulfur in chemistry.
9. A chemical element whose name refers to 'heaviness' was discovered in 1781 by Karl W. Scheele. He gave it a Scandinavian name and called the newly found element 'heavy stone'. What is the name of this element?

Tungsten, also known as wolfram, has the highest melting point of any metal. It is used to harden steel. It can also be used a a filament in electric lights since it can be drawn into wire as thin as one-thousandth of an inch.
10. This chemical element is indicated with the letter K, from Latin kalium, but is usually referred to by which nine-letter long name?

Potash can most easily be obtained by calcination of glasswort or saltwort. Next to lithium, potassium is the lightest solid element. The name of potassium refers to how it was originally obtained, from ashes from vegetable matter burned in a pot.
Source: Author flem-ish 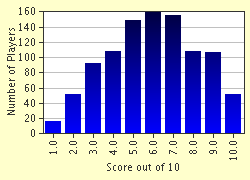