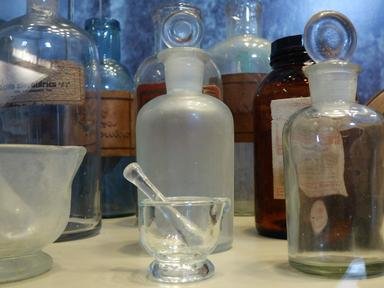 Match each element to the proper description. Do not fear: it may be science, but it's not technical!

The atomic mass (atomic weight) of hydrogen is 1.00794. Hydrogen is the most abundant element in the universe, and makes up four fifths of all ordinary matter. While hydrogen is a gas, at extreme temperatures and pressures, it can become metallic.
2. Lightest of all metals

Along with helium and hydrogen, lithium was one of the three elements created in the 'big bang'. It doesn't seem to be required in normal physiology; however, it is often used as a drug for mood stabilization.

Li2 is a gas called dilithium but, contrary to what you may have heard on "Star Trek", there are no 'dilithium crystals'!
3. 78% of all air

Nitrogen is a gas which is essentially inert, and makes up nearly 80% of the atmosphere. Nitrates are used to make synthetic fertilizers to help crop growth. Unfortunately, the runoff from the excess makes its way into rivers and oceans, depleting oxygen and polluting our waterways.
4. Most chemically reactive non-metal

Fluorine is sometimes called "the tiger of chemistry" because it is the most electronegative of all the elements. In fact, it even reacts with some of the heavier noble gases, which are very fussy about interaction. The good news - fluorine forms some of the strongest molecular bonds; the bad news - fluorine based pollutants, like non-stick coating Teflon, are extremely difficult to get rid of, and may outlast the cockroach.
5. Found in sea water

The symbol for sodium is Na. Sodium was discovered by Sir Humphrey Davy in England in 1807, and the origin of the name comes from the English word for 'soda'. However, the symbol comes from the Latin word 'natrium'. Sodium is classified as an alkali metal and bonds nicely with one of the halogens, i.e., chlorine, forming sodium chloride or what we commonly call salt.
6. Most frequently used noble gas

The symbol for argon is Ar. It is one of the noble gases and was considered totally inert (the privileges of nobility?) until the year 2000. Finnish chemists proved that it does form compounds with hydrogen fluoride...but only at -265 degrees Celsius (which is not much above absolute zero ---
or -273.15 degrees Celsius). Did you know that argon is the third most common gas in the Earth's atmosphere? Argon is more than 500 times more abundant than the next most common noble gas, neon.
7. Highest melting point

Tungsten is also known by the Germanic name wolfram, with the chemical symbol W. Tungsten is from the Swedish words meaning 'heavy stone'. It has the highest melting point of all the elements at 6,170 degrees Fahrenheit or 3,410 degrees Celsius, and is the heaviest element to be used by humans. It falls into the category of transition metals.
8. Also called quicksilver

Mercury was formerly named hydrargyrum, so its chemical symbol is Hg. It is the only metal which is liquid at room temperature. In ancient Rome, Mercury was the messenger of the gods. Mercury (the element) is a very rare element in the Earth's crust, and is known to be highly toxic.

However, at one time it was thought have therapeutic properties. In fact, Lewis and Clark took mercury laxative pills on their expedition; this later helped archaeologists identify traces of their camping sites.
9. Allotropes include diamond and graphite

I couldn't leave out carbon because we are all (on this planet) carbon based life-forms. In fact, 80% of known molecules are carbon based and are called 'organic'. An organic compound includes any member of gaseous, liquid or solid compounds whose molecules contain carbon, e.g., proteins are made from amino acids ("the building blocks of life") which contain carbon, hydrogen, oxygen and nitrogen atoms.
10. Helps promote strong bones and teeth

Calcium is included in the category of alkaline earth metals, and is the most abundant mineral in the body. It is an ingredient of hydroxylapatite, the mineral that makes up 50% of bone mass and dental enamel. Calcium is the fifth most abundant element by mass in the Earth's crust.

It is essential for living organisms, and can combine with other elements, e.g., calcium carbonate, which is the scientific name for chalk.
Source: Author nyirene330 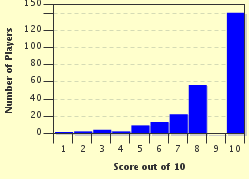