The Magic of Math Trivia Quiz

Math is not my favorite subject, but I thought writing a quiz about it would help me understand it more.

Quiz Answer Key and Fun Facts
1. A fraction has a numerator and a denominator. On a fraction, what is the bottom number known as?


Answer: Anything inside a parenthesis is worked first

A logarithm is the power that a number must be raised to in order to get another number. A nonzero number is any number other than zero. A percentile is the value in which a certain percentage falls.
4. A triangle is a three sided figure. What kind of triangle has three different sides with three different angles, none of which is 90 degrees?

A right triangle is a triangle with one angle that equals 90 degrees, and may also be classed as a scalene triangle.

An isosceles triangle is a triangle with two sides that are the same.

A variable in algebra is an unknown number so it is usually represented by a letter of the alphabet, although other symbols can be used as well. In algebra, a constant is a number.
9. How many degrees are in a straight angle?

The absolute value of pi is not known because the decimal places go on forever. Pi to the twelfth place would be 3.141592653589.
Source: Author pennie1478 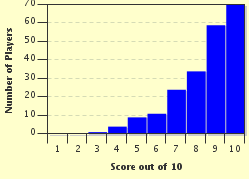 Related Quizzes
This quiz is part of series Be Afraid, Be Very Afraid:

A quiz list all who fear multiplying or dividing by six should definitely avoid. For those not afraid of simple math, enjoy!