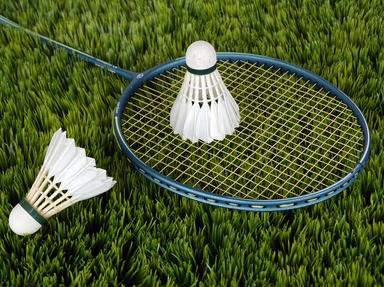 I hope you know your badminton. :)

Quiz Answer Key and Fun Facts
1. Which of these is a fault when serving?


Answer: Hitting the feathers of the shuttle first

This law was introduced to ban the S-Serve or Sidek Serve, invented by the Malaysian Sidek Brothers, which allowed the server to make the shuttlecock spin chaotically in flight.
2. Each game is played up to how many points?

So if the score reaches 20-20, they must win by 22-20, 23-21 etc. However, the maximum amount of points than someone can get during tie-breakers is 30.
4. Is the server allowed to lift a foot before the shuttle is struck?

This is done to prevent any advantage on either sides.
5. When the shuttle travels flat across the court, it is known as a what?

This is an effective move that is hit to the opponent's rear court. When used properly, it forces the opponent to lift the shuttle in reply.
6. If the server serves when the receiver is not ready, the server gets a ...?

However, if the receiver makes any attempt of hitting the shuttle back, he is judged as ready.
7. If a player strikes the shuttle, and it bounces on the tape and goes over the net, what happens?


Answer: The point is counted

However, if it bounces on the tape and doesn't go over the net, it is a fault.
8. Taufik Hidayat of Indonesia set a record for the fastest recorded smash in a singles competition. How fast was it?

Fu Hai Feng of China set a record for double smash with 332 km/h (206mph).
9. Which of these badminton strokes travel the slowest?

It is done by hitting the shuttlecock so that it falls downward into the opponent's rear court.
10. Which of these is not a usually stroke for defending a smash?

Blocks and drives are counter-attacking moves, where lifts might allow the opponent to continue smashing.
Source: Author markrule777 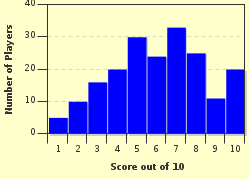 
Other Destinations
Explore Other Quizzes by markrule777