All multiple choice with pictures for you to identify some sports stadiums/arenas in the USA. I hope you enjoy it. :)

Quiz Answer Key and Fun Facts
1. Which stadium did the National Football League San Francisco 49ers play their home games in during the 2010 season?

The 49ers played at Candlestick Park in San Francisco for the 2010 season. In 2010, Sun Life Stadium was the home of the Miami Dolphins, both in the NFL. The RBC Center was a hockey/basketball arena located in North Carolina.
Pictured were candlesticks.
2. Which arena was home to the NBA's Dallas Mavericks and the NHL's Dallas Stars for the 2010-11 season?

The Time Warner Cable Arena which opened in 2005, was the home of the Charlotte Bobcats. The arena seated 19,077 for basketball, although the capacity could be expanded to 20,200.
Pictured was a Time-Warner Cable Company service van.
6. EverBank Field was the home field for which NFL franchise in the 2010 season?

EverBank Field opened in 1995. The field seated 67,164, although it could be expanded up to 76,867 fans. The Denver Broncos played at Invesco Field at Mile High, and the Dallas Cowboys played at Cowboys Stadium.
Pictured was a jaguar.
7. In the 2011 season, which American League Baseball ballpark was the home field of the Kansas City Royals?

Kauffman Stadium seated 39,000 people, down from 40,625 after renovations were completed in 2009. The ballpark used to be known as Royals Stadium until 1993 when the name was changed. Comerica Park was home of the Detroit Tigers, and Progressive Field was home of the Cleveland Indians in 2011.
Pictured was a Kaufman's Department Store location.
8. The NHLs Pittsburgh Penguins moved into a new arena for the 2010-11 season. What was the name of their new venue?

The Penguins moved from the Mellon Arena to the Consol Energy Center after the 2009-10 season. The arena seated 18,087 for hockey, up from the 16,940 that the Mellon Arena seated.
The photo was of a console, the center area between the seats of some cars.
9. The NBAs Los Angeles Lakers played their home games at which venue during the 2000s decade?

The Staples Center opened its new doors in 1999. The Lakers moved from The Forum in Inglewood to play at Staples. The arena was home to the Los Angeles Lakers and the Los Angeles Clippers of the NBA, the Los Angeles Kings of the NHL, and the Los Angeles Sparks of the WNBA.
The photo was of an office stapler.
10. Located near Disneyland in California, where did the NHLs Anaheim Ducks play their home games in the 2010-11 season?

The Honda Center opened its doors to Los Angeles Laker preseason games and concerts, and ice hockey's Ducks who played their home games there.
The photo was of a Honda brand superbike.
Source: Author Nightmare 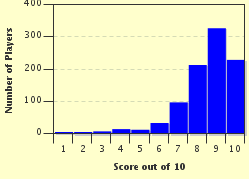 Go to USA by Year Quizzes