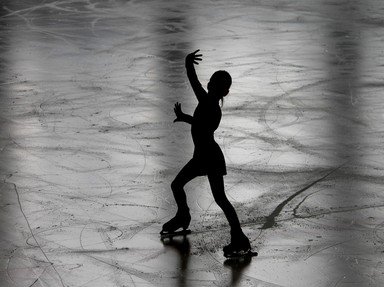 This is a quiz about the incredible Jayne Torvill and Christopher Dean. Enjoy!

Share on Facebook
Share on Twitter
Share by E-Mail
Author
crazeesurf
Time
3 mins
Type
Multiple Choice
Quiz #
255,609
Updated
Dec 03 21
# Qns
10
Difficulty
Average
Avg Score
7 / 10
Plays
755
Awards
Top 35% Quiz
This quiz has 2 formats: you can play it as a or as shown below.
Scroll down to the bottom for the answer key.

Quiz Answer Key and Fun Facts
1. Where were both Jayne Torvill and Christopher Dean born?

There is a National Ice Centre in Nottingham and this was where Torvill and Dean did all of their training. A public area known as Bolero Square is named in honour of the pair's Olympic achievements. They are, after all, Britain's most famed ice skaters.
2. Why are Torvill and Dean so famous?

They received 12 6.0s (one from each judge) for their routine. 6.0 is the highest you can score. This score included artistic impression scores of 6.0 from every judge. Artistic impression is the presentation of the performance and includes things like transitions between elements and posture over the ice.

The score they received made the pair the highest scoring figure skaters of all time (for a single programme).
3. What year did they win gold for pairs ice dancing at the Winter Olympics in Sarajevo?

This same year they won the World Championships, the European Championships, and the BBC's Sports Personalities of the Year.
4. What piece of music did they skate to for their Olympic gold medal-winning performance in the pairs ice dance?

This powerful piece of classical music was composed by Maurice Ravel and was originally composed as a ballet (premiered in 1928). Dean said that the music allowed them to be inventive with one piece of music, one rhythm. Most skaters choose four pieces of music each with a different tempo and rhythm to work with in the four-minute limit.

They do this to show that they are able to work with all sorts of different styles of music and they are able to perform a transition between them but Torvill and Dean felt strongly about their choice of music.

They wanted to try new and different things and clearly it worked!
5. They won the World Championships for the fourth time in a row in 1984.

Chris (a former policeman) and Jayne (a former insurance clerk) did all of their own choreography with Chris acting as chief choreographer for the Torvill and Dean team.
6. When was the last time that they won the European Championships?

It was the fourth time they had won it, winning their first in 1981. 1994 was the same year that they won bronze at the Winter Olympics in Lillehammer, Norway, and Chris married for a second time.
7. They announced their retirement in 1998, and they finally retired in 1999.

A full 15 years after striking gold at the Olympics. Christopher Dean was never ever late for anything and Jayne Torvill's favourite sport outside of skating is shopping.
8. What were they awarded in 1999?

They were rewarded OBEs by Prince Charles in the New Year's honours list on Friday 31st December 1999, for "services to ice skating".
9. How many children do they have between them?

Jayne has a son called Kieran and a daughter called Jessica. Chris has two sons named Jack and Sam. Jayne married her husband, Phil Christensen in 1990. He was an American engineer who worked on one of their ice show tours in 1988-90, the Russian All-Star tour.

It started in Moscow (August 1988) and ended in Belfast (September 1990). Chris married French Canadian world ice dance champion Isabelle Duchesnay in 1991, but divorced in 1993. He remarried in 1994, to Jill Trenary, an American skater.
10. The pair were reunited on the ice in 2006 to coach, choreograph and perform in a celebrity ice dancing competition on ITV. What was it called?

They were also involved in the Australian version of the show entitled; "Torvill & Dean's Dancing on Ice".
Source: Author crazeesurf

This quiz was reviewed by FunTrivia editor Nightmare before going online.
Any errors found in FunTrivia content are routinely corrected through our feedback system.
Most Recent Scores
Today : Guest 41: 0/10
Nov 26 2022 : Guest 207: 7/10 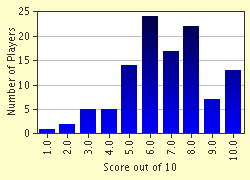 
Other Destinations
Explore Other Quizzes by crazeesurf