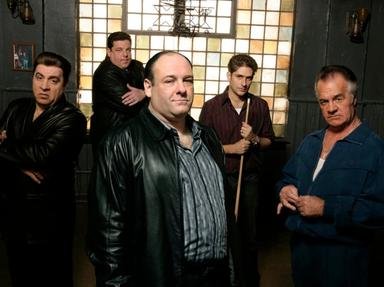 All of these questions pertain to the episode titled, "Eloise", which was the twelfth episode of season four. Good luck!

Quiz Answer Key and Fun Facts
1. Which actor guest starred as Benny Fazio in this episode?

Portnow, born on January 26th, 1947 in Brooklyn, New York appeared as Hal Melvion, an attorney, in this taping of "The Sopranos". He was in the role for a total of thirteen episodes. He has also had guest starring stints on the TV shows, "NYPD Blue", "Hannah Montana" and "Boston Legal".
3. The episode began at the courthouse. Who was on trial?

The episode took place at the courthouse in the first scene where the district attorney made an argument qualifying the defendant, Corrado Soprano, for a guilty verdict. He claimed the man appeared to be some old, harmless man but otherwise possessed a ruthless streak harming civilized people amidst him.

Near the beginning of the show, AJ came down from his bedroom at the Soprano residence to read his school report to his mother. It only took him a few minutes before completing it. Shortly after AJ uttered the final word, Tony came down for a bite to eat.
5. Tony claimed that Carmela's mother had which disease?

Tony spoke with Carmela about going away for a vacation but she claimed that would not be possible since she had to look after her mother. Shortly afterwards, Tony got in the car with Furio where he complained about Carmela whining about not vacationing in the past two years and now would not take up the opportunity.

This was when he stated his mother-in-law had been stricken with psoriasis.
6. Tony told which person at a casino that Johnny Sack wanted to have a talk with him?

Tony was at a casino with several buddies of his when Silvio showed up. He and Silvio got to chatting with Tony mentioned Johnny Sack wanting to have a sit down talk with him about something serious. Shortly after this, Tony parted from Silvio in order to flirt with a nearby voluptuous woman.
7. Who informed Carmela that Meadow was on campus and would be back soon?

Near the beginning of the episode, Carmela stopped by Meadow's apartment and saw Colin there. Colin made sure to inform her that Meadow was up at campus but would be back to the apartment as soon as possible. Sure enough, Meadow appeared about a minute later.
8. Who greeted Tony at Caldwell Airport?

After Tony and several of his friends finished a fun evening at the casino, they went to Caldwell Airport where a helicopter awaited their arrival. Greg Ewett greeted Tony there as one of Tony's drunken friend hopped out of the limousine. Right before Tony got into the helicopter, he and Furio had a tense conversation.
9. In one scene, midway through the episode, Carmela told Tony that Bobby was forty minutes late.

The following morning, Tony awoke and went to the kitchen where he saw Carmela. He asked her if Furio had come by but she told him he would be forty minutes late. Carmela inquired as to where Tony was the previous night, seeing how his appearance was cause for alarm, but he claimed to not have any recollection.
10. Meadow called which person up to invite him/her to dinner?

Meadow telephoned her mother to let her know that she was going to be making dinner on Sunday evening. She informed her mother that she would like her and dad to attend so she could introduce them to all her friends residing in the quarters. Carmela promised her they would be there.
Source: Author CAGuy0206

This quiz was reviewed by FunTrivia editor Gamemaster1967 before going online.
Any errors found in FunTrivia content are routinely corrected through our feedback system.
Most Recent Scores
Jan 25 2023 : Baby_Bebe: 2/10
Jan 11 2023 : Guest 172: 9/10 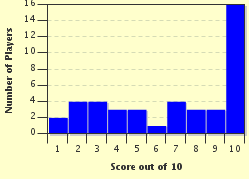