Dem Bones, Dem Bones, dem dry bones... Simon sez, "I find that rendition rather amateurish". Refer to episode "The Wannabe in the Weeds."

Quiz Answer Key and Fun Facts
1. What did they call Pam Nunan?

Patty alluded to Temperance as being scrawny.
2. Who plays the victim, Tommy Sour?

Ace has beautiful eyes, but to see ants crawling out of them can you say "ew". When Temperance finally finds the head of the victim, the eye is pushed out of the socket by ants and she doesn't flinch. Gotta love her.
3. Remember Brandon Rogers from season six of "American Idol"? At open mic night what was the second song he sings?


Answer: "Corner of the sky"

Bones said he had such enthusiasm.
4. Booth said, "Everybody thinks they're the next Kelly Clarkson."

Bones said, "Who?" Kelly Clarkson has only been one of the most successful "Idol" contestants in the show's history. Bones (Temperance) is one of the greatest analytical minds of our time, but when it comes to pop culture, she is oblivious.
5. Who bursts out in a rendition of "Love Is a Many Splendored Thing" in the lab?

Every one is impressed by his singing and Hodgins calls him "Pavarotti".
6. Where did Pam say she was when Tommy was killed?

During the interrogation Pam becomes infatuated with Booth.
7. What was the "true" relationship between Tommy Sour and Pam?

When asked if Pam was a stalker, Booth said, "More like a stalk HIM."
8. What gift did Pam give Seeley?

Seeley is known for his colorful socks.
9. What does Seeley say to Temperance to let her know her assessment of the contestants' talent is too kind?

Paula Abdul is the "Idol" judge whose comments for each singer are almost always the nicest. Booth is suggesting to Bones that she is too easy on the Checkerbox contestants.
10. Temperance tells Seeley that she can sing "Borderline" better than Madonna. 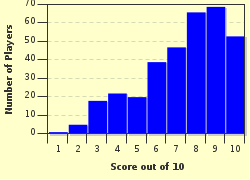 
Other Destinations
Explore Other Quizzes by hamletslady