This is a quiz about my favourite show "CSI: New York".

Quiz Answer Key and Fun Facts
1. In the episode "Zoo York", a new CSI, Lindsay Monroe, comes to join the team. What does Danny start to call her?

Danny initially resents Lindsay because she came to replace his previous partner, Aiden, but quickly falls for her and we see that they end up sleeping together in "Snow Day".
2. Which rapist killed Aiden Burn, a former CSI?

DJ Pratt is a rapist whom Aiden tried to convict several times. She ended up planting evidence and that is why Mac fired her.
3. What is the name of the pathologist that Mac dated and went to London with?

Mac agreed to go to London with her but came back without her and received a letter telling him that she was staying in London and quitting her job.
4. What is Don Flack's sister's name?

Stella is his co-worker. We first meet Sam in the first episode of season 5.
5. How did Sid Hammerback almost die in season five?

Sid was doing an autopsy when he noticed that the hair of the victim was coming out in clumps and under her temporary tattoos she had red blistered skin. He shut off the autopsy room and began a radiation warning. He said he was fine but then he collapsed. The discovery was made that it was Thallium, or heavy metal poisoning, which is a form of radiation poisoning.
6. Who is Reed?

Reed comes looking for his mother, Clare. He tracks down Mac and initially thinks Stella is his mother. He then finds out that she died in 9/11.
7. In season 5, Lindsay became pregnant with Danny's child.

We find this out in the episode "the box" in season 5. Lindsay is worried thinking Danny would freak out but at the end of the episode we see Danny looking fondly at a baby.
8. Which member of the "CSI: NY" team is the only main character not to appear in the "CSI: Miami" episode "MIA/NYC Nonstop"?

His first appearance on the show was in the official first episode "Blink".
9. In season 4, Mac has a stalker. When does the stalker keep ringing him?

We find out that this is the number of a hotel room where, when he was a boy, Mac refused to shoot and kill a man that was killing one of his friends. The stalker turns out to be his friend's younger brother whom Mac never knew witnessed this event as he was friends with only the two oldest brothers. The brother always resented Mac for this and almost killed him.
10. In the episode "Raising Shane", which team member was the prime suspect in a robbery/murder situation?

Sheldon was going to be charged with murder but the team discovered he was framed even though they were banned from the case.
Source: Author boopakatie 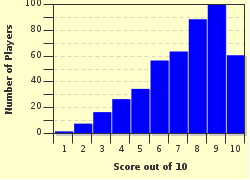 
Other Destinations
Explore Other Quizzes by boopakatie