This quiz is about Chrysler cars from the mid-1960s to the late 1990s. You will have to be a true Mopar fan to know the answers to a few questions!

Quiz Answer Key and Fun Facts
1. On which model or platform were most of Chrysler's vehicles of the 1980s and early '90s based?

Chrysler utilized the K-car platform for nearly all of its '80s vehicles, including minivans, to save money on product development costs.
2. What was the original name of Dodge's version of the Plymouth Duster, introduced for the 1971 model year?

The model name was changed to Dart Sport for 1973 after Dodge received complaints about the Demon name. The Scamp was the Plymouth version of the standard Dart, Polara was Dodge's full-size model, and Challenger was the Dodge version of the Barracuda.
3. What was the unusual type of front suspension that Chrysler used on many of its cars of the 1960s and '70s?

Both GM and Ford used more conventional A-arm or strut front suspensions, but Chrysler was known for its twin torsion bar front suspension.
4. Where is the headquarters of the Chrysler arm of DaimlerChrysler located?

Chrysler Corporation's headquarters were located in Highland Park until the early 1980s, when they were moved to Auburn Hills. American Motors, which Chrysler purchased in 1987, was headquartered in Kenosha. The Mercedes division of DaimlerChrysler is headquartered in Stuttgart.
5. What was the name of Plymouth's version of the minivan, now used on the lowest priced Chrysler minivan?

The Town and Country is the more expensive model of Chrysler minivan. The Dodge version is called the Caravan.
6. What was the nickname of the inline six cylinder engine used in many Chrysler products from the 1960s through the 1980s?

The Slant Six engine got its name because its cylinder head is positioned at an angle, rather than perpendicular as on most other inline engines.
7. True or False: The Plymouth Barracuda was introduced prior to the Ford Mustang.

The Barracuda went on sale on April 1, 1964, while the Mustang didn't go on sale until April 17. Of course, the Mustang outsold the Barracuda by a very wide margin.
8. What was the name of the Eagle version of the Dodge Intrepid and Chrysler Concorde LH sedan?

The LH sedans were introduced for the 1993 model year. The Vision replaced the Renault-designed Premier, which Chrysler was forced to sell as a result of its purchase of AMC. The Optima was an Eagle concept car and the Summit was Eagle's version of the Mitsubishi Mirage. The Eagle division was phased out after the 1998 model year.
9. Which Chrysler model was advertised in the famous 1970s TV commercial featuring Ricardo Montalban?

The Cordoba was Chrysler's entry in the 'personal luxury' segment and was intended to compete with the Chevrolet Monte Carlo. One of the luxury options available on the Cordoba was the 'rich Corinthian leather' seats mentioned in the commercial.
10. Which of these cars was not a full-size model sold by Chrysler Corporation in the 1980s?

The Plymouth Volare was considered a mid-size car when it was introduced in the mid-1970s. The Dodge St. Regis, Plymouth Gran Fury, and Chrysler Newport and Fifth Avenue were Chrysler's full-size models from 1979 to 1981. The Gran Fury and Fifth Avenue nameplates were later used on reworked versions of the Volare and LeBaron, which Dodge sold as the Diplomat.
11. Which famous racer worked with Dodge in the 1980s to build performance versions of its cars? Surname only - begins with "S".

Nearly every Dodge nameplate sold in the '80s offered a 'Shelby' high performance model, including the Omni subcompact and the Dakota mid-size pickup.
12. What was the cubic inch displacement of the Chrysler Hemi engine used from the mid-1960s to 1971?

The Hemi engine was originally introduced in the late 1950s, but the 426 c.i.d. version was not available until the early 1960s.
13. Most people know that a Dodge Charger was used as the 'General Lee' on 'The Dukes of Hazzard', but what Chrysler vehicle was featured in the movie 'Vanishing Point'?

The main character in the movie drives a 1970 Dodge Challenger.
14. What two-seated sports car was first produced at the Mack Avenue Engine Complex in 1991, but moved to the Conner Avenue Assembly in 1995?

The Viper was first conceived in 1988, and approval for construction came from chairman Lee Iacocca in 1990.
15. What was the name of the special NASCAR-influenced Charger model introduced in 1969 before the winged Charger Daytona?

The unique features of the Charger 500 were a flush-mounted grille, exposed headlights, and a more aerodynamic rear window. It performed only marginally better than the standard Charger on the tracks, though, so the Charger Daytona was introduced later in the 1969 model year. It was a big improvement over the Charger 500, but was eventually outlawed by NASCAR after having won many races.
Source: Author karock 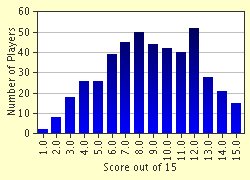 
Other Destinations
Explore Other Quizzes by karock