Do you know Icelandic? Trivia Quiz

This will test your knowledge of some simple sentences/words in Icelandic.

Means literally "Bye-bye". Saying only "Bless" is also right but for some reason most Icelanders say it twice. It's the same in English: "Bye" and "Bye-bye".
3. "Já" means what?

"Já" means simply "yes". But saying "já já" means that you are frustrated or bored of hearing about something.
4. "Hvađ heitirđu?" means...?

Means literally "What are called you?". People answer this question by saying "Ég heitir...", which means "My name is...".
About Icelandic names: almost all Icelandic surnames end in "son" or "dóttir". These two words mean "son" and "daughter" respectively. People put their father's name in front of "-son" or "-dóttir" to make a surname.
Example:
A man is called Jón (John) and his father is Davíđ (David). Then this guy has the surname "Davíđsson" (There are two 's' because it's like "David's son" in English).
A woman called Kristín (Christy) and her father is Davíđ, then her full name will be "Kristín Davíđsdóttir".
5. "Hvađ ertu ađ gera?" means what?


Answer: What are you doing?

To make this sentence sound rude, people use the word "djöfulsins" instead of "hvađ". The whole sentence will then be "Djöfulsins ertu ađ gera?" which can be translated as "What the hell are you doing?".
6. If somebody says to you "Hvernig gengur?", then he is asking where you are from.

"Hvernig gengur?" means "How are you doing?". People often say this when they greet each other, showing that they care about the other person.
7. "Hvađ ertu gamall?" means:


Answer: How old are you?

The word "bíó" means "cinema". Another word meaning "cinema" in Icelandic is "kvikmyndahús", meaning literally "movie-house".
10. How do you say "thanks" in Icelandic?

Yes, "thanks" in Icelandic is "takk".
Actually, there are a lot of ways to thank people - here are some more:
"Takk fyrir" = Thanks for (it)
"Ţakka ţér fyrir" = Thank you for (it)
"Takk kćrlega" = Thanks passionately
and many more...

Extra: Some words to say back are:
"Ekkert mál" = No problem
"Ţađ var ekkert" = It was nothing
"Mín ánćgja" = My pleasure
Source: Author kitiboy 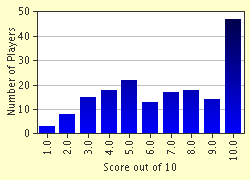 
Other Destinations
Explore Other Quizzes by kitiboy