In this quiz, I'll give you the official language or languages of a country and you'll guess which country it is.

Quiz Answer Key and Fun Facts
1. Finnish and Swedish are official languages in which country?

Finland and Sweden are bordering countries so about 5.6% of Finnish population speaks Swedish. Those languages are different. Finnish belongs in the Uralic language family, together with Hungarian and Estonian, which is somewhat similar to it. Swedish is in the Indo-European language family.
2. Italian is the official language in this small country which is completely surrounded by Italy. This country isn't located in Rome. Which is it?

Andorra is a landlocked country between France and Spain. It is a tourist country in the Pyrenees. Catalan is also spoken in a part of Spain, which is bigger and bordered by both the Atlantic Ocean and the Mediterranean Sea.
4. French is the official language in this small Mediterranean country famous for its monarchs and gambling.

The Flanders region on the north of Belgium is the home of the Dutch speaking people, whereas the Wallonia is in the south and there are mostly French speakers. Only about 1% of the population speaks German.
6. The official languages in this country are Bosnian, Croatian and Serbian. Which European country is it?

There are three ethnic constituent peoples in Bosnia and Herzegovina: the Bosniaks, the Serbs and the Croats. They have their languages which are very similar.
7. English, as well as Maltese is the official language in this country.

The majority in Malta are the native Maltese and the minority are British and they mostly retire there. Before it was replaced by English in 1934, Italian was the second language in Malta.
8. In this country you can hear people speak French, German and Luxembourgish.

Luxembourgish is a language which is officially used in Luxembourgh since 1984. Today it has about 390.000 speakers. It is very similar to German with French expressions. German is taught in schools and spoken in the media and the church, whereas French is used in business.
9. Romansh, French, German and Italian are official languages in this European Country.

A bit more than 60% of Swiss population speaks German, about 20% French, 6% Italian and about 0,5% of Swiss people speak Romansh. The federal government in Switzerland is obliged to communicate in these official languages.
10. German is the official language in this mountainous landlocked country located between Austria and Switzerland.

Liechtenstein is surrounded by two German-speaking countries, Austria and Switzerland, and very close to Germany. One third of the population is foreign-born so no wonder German is the official language.
Source: Author B.U. 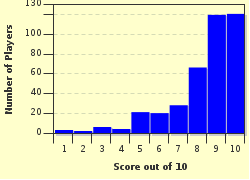 
Other Destinations
Explore Other Quizzes by B.U.