Does anyone speak Danish?

Share on Facebook
Share on Twitter
Share by E-Mail
Author
SommerDK
Time
4 mins
Type
Multiple Choice
Quiz #
116,738
Updated
Dec 03 21
# Qns
10
Difficulty
Average
Avg Score
7 / 10
Plays
1005
This quiz has 2 formats: you can play it as a or as shown below.
Scroll down to the bottom for the answer key.

Quiz Answer Key and Fun Facts
1. What is the Danish word for Denmark?

Monday, Tuesday, Wednesday, Thursday, Friday, Saturday, Sunday.
5. There are no countries other than Denmark where people speak Danish.

Both Greenland and Faroe islands have languages of their own, but the population of both speaks Danish too. There is also a small Danish minority in the most northerly state ("Land") of Germany - Schleswig-Holstein.
6. What is the Danish word for 'shirt'?

Sea is "hav" and lake is "SŘ".
8. Which of the following translates specifically as "My name is"?

"Mit navn er" also means "My name is..." The other options are similar, but their specific translations are: "Jeg kaldes" - "I am called"; "jeg er" - "I am"; "mig hedder" - "me name is". Note that "mig hedder", like its English equivalent, is ungrammatical.
9. What is the Danish name of Copenhagen? 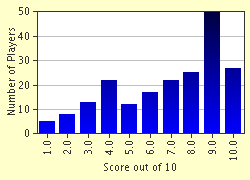 
Other Destinations
Explore Other Quizzes by SommerDK