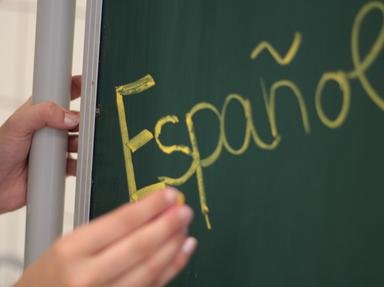 Second in a series thanks to great response! Here are animals you might find on a farm. Match the English name with the Spanish name (in ALL CAPS). Then I'll be back to share some interesting word origins. ¡Buena suerte!

The word 'vaca' comes directly from the Latin 'vacca', which came relatively late, and in the rural areas only, to identify a cow. The use of 'vacca' spreads to the Romance languages (e.g. 'vache' in French), and the only other existing parallel in the Indo-European linguistic world is 'vańa' in Sanskrit.

The classical Latin words, 'bos' or 'bovis', signified cattle of either sex. (You had to say 'bos mas' for bull and 'bos femina' for cow.) They are also the origin of the Spanish word 'buey' for "ox".

In English, you might notice the cognate with 'vaccine'. Edward Jenner in the the 1790s injected people with cowpox virus to prevent smallpox -- the first vaccine. Moo.
2. El TORO es feroz.

"The bull is fierce."

In classical Latin, 'taurus' referred to wild cattle of either sex, just as 'bos' and 'bovis' referred to domestic cattle of either sex. It comes from the Indo-European '*tauro', whence 'tavros' in Greek, 'tauris' ("bison") in Old Prussian, 'tauras' in Lithuanian, and similarly throughout Europe. The IE word may in turn come from the root '*(s)taeu-', which means "stout, strong" (and may be the source of the English word 'steer'). How 'toro' got to mean only 'bull' in Spanish, it is not clear.

Pet owners might recognize 'taurine', which has the same root; it is an amino acid that German professor Leopold Gmelin discovered in ox bile, and it is an essential nutrient particularly for cats.
3. El CERDO gru±e y juega en el lodo.

"The pig grunts and plays in the mud."

'El cerdo' entered the Spanish language in the 18th century. (In classical literature, you will find 'puerco' or 'cochino' or 'marrano'.) The word's origin is in dispute among Spanish etymologists. One theory is that it comes from the phrase 'ganado de la cerda' (roughly, "livestock having bristles"). This may have come from the Latin 'cirrus' for "tuft of hair" (which we use in English to denote certain wispy clouds.) There is a resemblance to the Basque word 'zerri', but did the Basques get it from the Romans or the other way around?

"The duck says, 'quack-quack' and swims in the water."

Like many Spanish words, 'pato' is of Arabic origin ('batt'). The Arabs borrowed it from Persian ('bat'), as the original Semitic word ('iwazz') did not distinguish between ducks and geese. In Catalonia in northeastern Spain and in Valencia, however, this Arabism is considered vulgar, and in the Catalßn language they use 'Ónec', which comes from the Latin 'anas'. In Spanish, only among zoologists would you hear the Latinism 'ßnade'. That root also gives English the word 'anatine', which is to ducks what 'feline' is to cats.

'El pato' is also slang in South America for a man's hospital bedpan, its curvy shape resembling a duck. In Chile, you might hear the phrase 'andar pato' ("to walk as a duck") to refer to someone who is broke.
5. El GANSO grazn¾ en voz alta.

Hunter S. Thompson's coinage of "gonzo journalism" comes from the (Neapolitan) Italian 'gonzo' ("rude"), which comes from the Spanish 'ganso'! If you noticed the similarity, you might have been able to guess the word.

'El ganso' is actually a Germanic derivative, from 'gans'. Sometimes the domestic goose, 'el ganso domķstico', is 'la oca' (from Late Latin 'occa') especially when it is all white.

You may see the Latin derivatives 'el ßnsar' ("gander") and 'el ßnsaron' ("gosling") in zoological contexts; in common parlance they sound too antiquated or technical, while 'ansarino' for "gosling" is less so. That Latin root is 'anser', from which in English we get 'anserine' ("goose-like").
6. Me gusta montar el BURRO, per ķl es muy obstinado, y dice "iii-ahh".

"I like to ride my donkey, but he is very stubborn and says, 'hee-haw'."

Direct from the Latin 'burricus' ("small horse") comes 'burro' (donkey), also 'borrico' in Castilian Spanish. The word 'burro' is used more in Latin America than Spain, and it has made its way into English to refer to that small donkey used as a pack animal. The burro is a very important figure in Latin American folklore.

The word 'burricus' may refer to the roughness or to the color of the animal's fur. Then again, it may refer to the small horses that belonged to the Buri or Burians, a Germanic tribe occupying the northern foothills of the Carpathians and extending a bit into Bohemia and Moravia.
7. El CABALLO galopa en la carrera.

"The horse gallops in the race."

'Caballo' comes from the Latin 'caballus', which refers to a horse for plowing or other labor (a draft-horse or a hack), as opposed to 'equus', for riding and making war, or just "horse" in general. The word for "mare" is 'yegua', from 'equa' (the feminine), because mares were used more for riding than for pulling, plowing, and other work (so 'caballa' fell by the wayside). A gentleman in Spanish is 'un caballero' ("a horseman").

"The rooster [or cock] crows every morning."

Straight from the Latin 'gallus' do we get the Spanish word 'gallo'. As the rooster is known especially for his morning cry, the Indo-European root, 'gal-', refers to yelling or shouting.

A South American dance called 'la cueca' represents a rooster pestering a hen, danced in Chile, Bolivia, and Ecuador. There is an old Chilean saying, "A good rooster in every henhouse sings," and as in English, the word 'gallo' is associated with male anatomy because of the rooster's proclivities. (It's actually why in English the Victorians invented the euphemism "rooster".)

"The hen lays eggs in the henhouse."

The Spanish 'gallina' is identical to the Latin word for "hen". The same root applies to 'gallo' ("rooster") and to 'gallinero' ("henhouse" or "chicken coop") -- which also means "madhouse"! When the eggs hatch, we get 'los pollitos' or 'los polluelos' ("chicks").

Generally speaking, chicken on the table for eating is 'el pollo', as in 'arroz con pollo' ("chicken with rice"), and the live animal is 'la gallina'. (Compare cow vs. beef or pig vs. pork in English.) This is especially true in Mexico.

In some cultures, however, you want to be more specific. In Colombia and Peru, for example, they want an older hen, 'la gallina', for making certain soups and stews, because the meat is ruddier and stronger than 'el pollo', which comes from a younger chicken (of either sex). The distinction between the two is very important to their cuisine.

Thus there is a saying: 'Gallina vieja hace buen caldo', or "An old hen makes for good stew". If you are thinking that sounds like a double entendre, you are correct.
10. El GATO ronronea, y captura ratones.

"The cat purrs, and it captures mice."

'Gato' is derived from the the Late Latin word 'cattus', which displaced 'feles' in the 5th century and which bears a resemblance to nearly *every* European word for "cat" -- in Spanish, French, Gaelic, Welsh, Breton, Russian, Byznatine, Polish, Finnish, etc., not to mention Arabic! 'Cattus' and the like may have penetrated European languages by way of North Africa (e.g. 'kadis' in the Nubian language). Or it may refer to a species of cat found among the Chatti (now Hesse), an ancient Germanic tribe of the Weser and Rhine rivers that opposed the Romans in the 1st century A.D.

By the way, 'ronronear' ("to purr") is a great example of onomatopoeia in Spanish, as it comes straight from imitating a cat: "rrrnnrrrnnnrrrrnnn". (Think of trilling your r's in Spanish). And a Spanish cat also goes 'miau'.
Source: Author gracious1 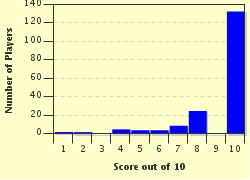 Please enjoy my collection of Spanish quizzes in the Match format. If you have had a little Spanish in school, these won't be too difficult. (N.B. Sometimes the inverted exclamation point shows up correctly in the quizzes, and sometimes it does not. I have no control over that.)