We all have to work for a living (or least at most of us do). In the U.S., OSHA is the federal regulatory agency responsible for standards for workplace safety. So, what do know about OSHA and workplace safety?

Quiz Answer Key and Fun Facts
1. What does the acronym OSHA stand for?

OSHA's mission is to assure the safety and health of America's workers by setting and enforcing standards; providing training, outreach, and education; establishing partnerships; and encouraging continual improvement in workplace safety and health.

OSHA and its state partners have approximately 2100 inspectors, plus complaint discrimination investigators, engineers, physicians, educators, standards writers, and other technical and support personnel spread over more than 200 offices throughout the country. This staff establishes protective standards, enforces those standards, and reaches out to employers and employees through technical assistance and consultation programs.

THE PUBLIC WE SERVE

Nearly every working man and woman in the nation comes under OSHA's jurisdiction (with some exceptions such as miners, transportation workers, many public employees, and the self-employed). Other users and recipients of OSHA services include: occupational safety and health professionals, the academic community, lawyers, journalists, and personnel of other government entities.
2. What Congressional Act established OSHA?

Be it enacted by the Senate and House of Representatives of the United States of America in Congress assembled, That this Act may be cited as the "Occupational Safety and Health Act of 1970."

(a) The Congress finds that personal injuries and illnesses arising out of work situations impose a substantial burden upon, and are a hindrance to, interstate commerce in terms of lost production, wage loss, medical expenses, and disability compensation payments.

(b) The Congress declares it to be its purpose and policy, through the exercise of its powers to regulate commerce among the several States and with foreign nations and to provide for the general welfare, to assure so far as possible every working man and woman in the Nation safe and healthful working conditions and to preserve our human resources.
3. Who was the President that signed this Act into law?

As result 1965 Public Health Service report that criticized the effectiveness of state workplace safety programs and the lack of federal oversight,Present Johnson was heavily lobbied to support the report's recommendation to establish a national workplace safety and health program.

Both sides of the aisle introduce bills, with the Republicans favoring the President Nixon's proposal and the Democrats in favor the stronger legislation that was advocated by labor unions. A compromise was reached and the compromised bill was passed by House of Representatives 308 - 60 with the Senate adopting the bill, without debate, by voice vote. On December 29, 1970, President Nixon signed this bill into law. (Ref. answers.com/OSHA)
4. The following passage is known as what? "Each employer shall furnish to each of his (sic) employees employment and a place of employment which are free from recognized hazards that are causing or are likely to cause death or serious physical harm to his employees."

Section 5(a)(1) of the Occupational Safety and Health Act, know as the "General Duty Clause", places an obligation on employers to protect workers from serious and recognized workplace hazards even when there are not applicable standards regulating that particular workplace hazard or condition. If an employer fails in this obligation, OSHA can issue a citation under the General Duty Clause.
5. States can administer and enforce their own occupational safety and health program provided that (1) the program is as least as stringent and effective as the federal program, and (2) the program ____________.


Answer: Is submitted to and approved by OSHA

Section 18 of the Occupational Safety and Health Act of 1970 (OSH Act) encourages States to develop and administer their own Occupational Safety and Health programs. States must submit the program to OSHA for review and approval before may implemented. Additionally, the OSH Act mandates that OSHA must provide continuing monitoring and oversight of state programs to ensure their effectiveness.
6. OHSA provisions and regulations apply to state and local government agencies that employ workers.

The OSH ACT not does grant the authority to enforce OSHA provisions and regulations on state and local governments in their role as employers. The OSH Act, however, mandates that states that administer and enforce their own private sector occupational safety and health programs must also (or includes) have have program that protects its public sector workers. This program must be at least as effective as its program for private employees. Additionally, states may elect to administer and enforce a safety and health program that cover only its public sector employees with OSHA retaining the authority for the private sector. (per OSH Act Sections 3(5), 18 and 29 CFR 1956)

Currently, 26 states or territories administer and enforce their own private sector occupational safety and health programs with four of these states programs that only cover the public sector (state & local government). (Ref. osha.gov/dcsp/osp/index)
7. OSHA has the authority to inspect all workplaces that are subject to OSHA regulations.

Section 8 of the OSH Act grants OSHA the authority to inspect workplaces subject to OSHA regulations. However, a 1978 Supreme Court ruling (Marshall v. Barlow's, Inc.) ruled that an employer may refuse to submit to an warrant-less OHSA inspection. If there is probable cause or evidence that violation(s)and/or hazards to workers exist, a judicially authorized search warrant can be issued that allows OSHA to inspect workplaces without the employers consent.
8. An employer may be granted a variance from compliance with a standard if that employer can show that the practices, methods and/or processes in their workplace provides their employees a safe and healthy environment that is at least as effective as complying with the standard.

Variances must be applied for and granted before the fact and cannot be used as a defense from citations issued before the granting of a variance.
9. The OSHA 300A form must posted be conspicuously posted each year between February 1 and March 1 in every workplace that is subject to OSHA regulations. What is this form?

Death, Loss of consciousness, Restricted work activity or job transfer. Medical treatment (beyond first aid), Significant work related injuries or illnesses that are diagnosed by a physician or other licensed health care professional. These include any work related case involving cancer, chronic irreversible disease, a fractured or cracked bone, or a punctured eardrum.

The 'Job Safety and Health Protection Workplace Poster' (or a authorized state equivalent) must be posted in the workplace at all times. (per 29 CFR 1903 (a)(1,2)

There are no OSHA documents called the 'Citations of Violation of Standards Summary' or the 'List of Petitions of Variances from Standards'. However copies of Citations must be posted at or near the workplace where the violation occurred for three days or until the the violation has been corrected, whichever is longer (per 29 CFR 1903.16(b). If a variance is applied for, a notice informing employees of the variance application and the employee's right to request a hearing concerning the variance application must be posted in the workplace (per 29 CFR 1905.11(b)(5).
10. According to the OSHA website, since its inception in 1971, although U. S. employment has almost doubled from 58 million workers to more than 115 million worker in 2004, workplace fatalities have drop by more than _______ per cent.

Other items found on the OSHA website --- In the Fiscal year of 2005, OSHA employed more than 2,200 employees of which approximately one half were inspectors. OSHA's appropriation for that year was 468.1 million. What OSHA does not say on its web site is if any of its 2,200 employees have ever suffered work related fatalities, injuries or illnesses or if OHSA has ever inspected and/or cited itself for violations.
Source: Author worksafe 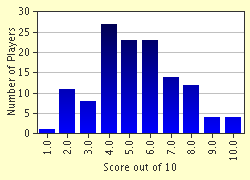 
Other Destinations
Explore Other Quizzes by worksafe