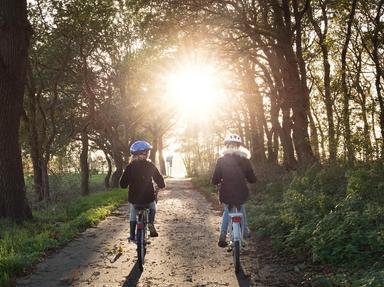 In this quiz, you will learn about some of the harmful things that could affect you or your family if you are not careful when surfing the Internet.

Quiz Answer Key and Fun Facts
1. What should you do if you receive an e-mail from someone you do not know?

Stranger danger exists in the computer world just as much as (if not more than) it does on the street. If you get an e-mail from someone you do not know, you should delete it. If you are unsure whether an e-mail is safe to open or not, ask a parent, teacher or trusted guardian to help you.
2. Which of these two computer programs was used by people to share and download pirated music?

Spam is a brand of canned meat (spiced ham). Spam is also a word used to describe those annoying pop-up ads you get on the Internet as well as endless junk e-mail. Attempting to download video games, music and other files illegally or opening e-mails from strangers could increase the amount of spam you get on your computer.
4. Which of these animals is the name of a type of computer virus?

A Trojan horse is a type of computer virus that disguises itself as a seemingly harmless file or program. For example, one of the most famous incidents involving a Trojan horse virus was a simple text document stating "ILOVEYOU". It contained a virus that infected millions of computers across the world.

In ancient history, the Greeks tricked the Trojans into accepting a large wooden horse as a gift, which hid soldiers inside ready to kill them.
5. From which of these two programs is it safe to download video games from (with your parents' permission of course)?

Steam is a program you can use to buy and download video games and other software for your computer without having to drive to a store. The Pirate Bay, as its name suggests, is a website where some people go to try to get video games and other files without having to pay for them. Do not attempt to download anything from The Pirate Bay or your computer could become infected with viruses and/or other forms of malware (malicious software).

Not to mention you could wind up in serious legal trouble if you get caught.
6. What fairy tale creature would you call somebody online who acts like a bully?

You may encounter trolls of various forms on social media sites such as Facebook, Twitter and Snapchat. They can also show up in online multiplayer video games. Trolls often enjoy stirring up arguments and harass people they do not like. If you encounter a troll online, ignore them and tell a parent if they continue to bother you so they can help you block out that person.
7. What word is used for somebody who uses a computer or the Internet to break into other computers?

A hacker is a person who is skilled at computer programming and uses what he or she knows to cause some trouble. Hackers can modify websites, transmit viruses or use their abilities to try and steal private information from individuals or businesses. If they are caught, hackers could get into trouble with the police and be forced to pay fines or get sent to jail.
8. What do you call it when someone tries to "bait" you into revealing private information?

Phishing is when someone attempts to trick you into sharing private information online, such as credit card and bank account numbers. This is why you need to be very careful about opening e-mails you do not recognize. Even an e-mail that looks to be from a well known company like Amazon could end up being a phishing scam.
9. Playing a "modded" version of an online video game could result in you getting banned.

Modding (short for modifying) a video game is a popular thing to do, especially on computers. However, doing so is not completely risk free. Some video game designers may not be happy with people playing modded versions of their game as it could violate copyright rules and create a disadvantage for other players if the game has an online multiplayer feature. If a video game company discovers you are playing a modded version of their game, they might ban your account from the game.
10. Which of these can help protect your computer from the dangers of the Internet?

Firewalls are programs used to help defend computers from being infected by viruses, spam and other forms of malware. Some firewalls will also help to block access to websites and programs that engage in piracy. However, while firewalls might help, you must still be careful when using the Internet as hackers may still find a way to break through them.
Source: Author RedHook13

Quizzes I have compiled from various Author Challenges


1. Hold On, We're Talking 1984 Tough
2. A Whole New (Virtual) World Average
3. Wrestling For Those Who Know Wrestling Easier
4. A Brand New Day Easier
5. So, Just How Did You Get That Callsign? Average
6. The Cosmic Perspective Average
7. Mountains of the Solar System Average
8. Zero is a Hero Average
9. Cake By The Ocean Average
10. My Two Suns Average
11. Water over Troubled Bridge Average
12. Towering Heights Average