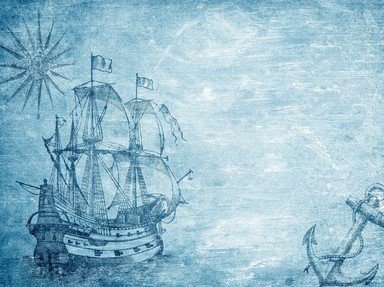 Circles 'Round the Sun Trivia Quiz

We owe a lot to the world explorers of the past. Traveling around Earth as it made circles 'round the sun, they opened up the world to us as we know it. How much do you know about these intrepid travelers?

Quiz Answer Key and Fun Facts
1. Over the duration of one circle 'round the sun, he was a Norse explorer who probably discovered Newfoundland

Leif was the son of Eric the Red, another famous Viking explorer. Probably born in Iceland, Leif sailed to a land he called "Vinland" because of the wonderful grape vines he found growing there. This was somewhere along the North American east coast, and the remains of a Norse settlement found at L'Anse Aux Meadows in Newfoundland is thought to have been Leif's Vinland.
2. Over eleven circles 'round the sun, he sailed on three voyages, first to watch a transit of Venus, second to plot the South Pole, and third to find the Northwest Passage

Originally a merchant seaman, James Cook was sent as Captain of HMS Endeavor to transport Joseph Banks to observe the 1769 transit of Venus. Although the viewing was poor, Cook did something better, discovering Australia and charting extensively. His second voyage on the HMS Resolution was to discover the so-called Terra Australis, a hypothetical land near the South Pole. Cook traveled very far south before proving his own theory that it did not exist and returning north.

Cook's final and third voyage was aboard the HMS Adventure, to discover the hypothetical Northwest Passage. After searching and finding nothing, Cook and his crew returned to Hawaii, where Cook was killed in a skirmish with native Hawaiians.
3. In one troubled circle 'round the sun, this sailor infamously discovered Pitcairn Island

Fletcher Christian was the mate of the Bounty, a ship under the command of Captain (actually a Lieutenant) William Bligh, bound for Tahiti to take breadfruit plants aboard. Accounts differ, but the general consensus is that Bligh proved to be a tyrannical Captain and Christian and several followers formed a mutiny and took over the ship on 28 April 1789, on her return voyage, setting Bligh and his followers afloat in open boats.

Christian and his group sailed the Bounty back to Tahiti; he and several of his group later sailed to an island where they hoped to never be discovered, for the penalty for mutiny was death. This island was Pitcairn Island; ships later landed there and descendants of Christian and his followers were found and identified.
4. Over two monumental circles 'round the sun, he sailed to North America under the patronage of King Henry VII to find North America and vanished on his third voyage

John Cabot was the first European to have visited North America after Leif Eriksson. made his first voyage in 1496, although little is known about it. His second voyage is by far his most famous, which he made in 1497, when he landed in North America. Cape Bonavista in Newfoundland is his proposed landing site.

His final voyage was in 1498. He departed from Bristol with five ships but no more is known. At least one man thought to have been on the voyage was later recorded as living in London; an expedition was mounted in search of Cabot but interest in exploration was dying out as Henry VII also died and the throne passed to Henry VIII. The Cabot Trail in Cape Breton, Nova Scotia, is named after the explorer.
5. Between three circles 'round the sun, this Dutch sailor was the first to sail to New Zealand

Abel Tasman was employed by the Dutch East India Company, making expeditions on their behalf in 1642 and 1644. He was the first European to see New Zealand, as well as Fiji and Tasmania, which was named after him. He died in 1659.
6. Over many circles 'round the sun in the early 20th century, he reached both the South and North Poles

Norwegian explorer Amundsen participated in many expeditions to the poles. In 1910 he began his expedition to the South Pole, finally becoming the first man, along with his party of five, to reach the South Pole on 14 December 1911. His 1918 North Pole expedition failed, but Amundsen tried again, finally reaching the North Pole by airplane along with fifteen others, the first ever proven to have done so, on May 12th 1926.

Amundsen vanished in 1928 while participating in a rescue mission over the Arctic. His remains have never been found.
7. Between two circles 'round the sun, this Portuguese was the first European to sail to India

Da Gama was the first to traverse the sea route from Europe to Asia, opening up trading routes. His voyage was around the Cape of Good Hope, between 1497 and 1499. He was granted the title "Viceroy of India" by the Portuguese government, and held that office for only a few months before his death in 1524.
8. Over decades of circles 'round the sun, this Chinese eunuch sailed with gigantic ships through Asia to Africa

Zheng He was commissioned by Chinese emperors to captain several voyages between 1405 and 1433. His ships were alleged to be bigger than any other wooden ships, including almost twice as long as any others before or after, with hundreds of men on board. His expeditions went throughout Asia all the way to the Holy Roman Empire.
9. In one eventful circle 'round the sun, he was the first European to discover Brazil

Following Vasco da Gama's expeditions, Cabral was a Portuguese nobleman who was commissioned to head a voyage to India in 1500. Blown off course, he arrived in a new land--Brazil. Cabral claimed the land for Portugal. He later fell out of favor and most of his accomplishments were forgotten until the 19th century. Cabral was also the first human to have visited all four continents.
10. Throughout one circle 'round the sun, he crossed North America to find an overland passage

Mackenzie worked for the North West Company, a fur trading company in the Canadian interior. In 1793, he completed the first crossing of North America, in an attempt to find the Northwest Passage. To his disappointment, he discovered only a river, later named the Mackenzie River in his honor. He was later knighted, and died in 1820.
Source: Author lordprescott


Other Destinations
Explore Other Quizzes by lordprescott