A few interesting facts about ten different toys and games for you to play with. Have fun!

Quiz Answer Key and Fun Facts
1. A slinky is not just a toy. It has been used in other fields of endeavour as well. One of these is in the field of aviation. Which of the following uses slinkies for physics experiments?

The National Aeronautics and Space Administration was founded in 1958 by President Eisenhower of the United States of America for the purpose of developing the country's space program, and for researching aeronatics and science. The humble little slinky was invented by naval engineer Richard James from Pennsylvania in 1943 when he was investigating ways to stabilise various equipment on board ship during turbulent weather conditions. He accidentally knocked one of the springs he had designed from a ledge, and watched in astonishment as it moved from object to object at different heights, by uncoiling and recoiling itself, before landing on the floor and righting itself. Thus the humble slinky was born.

Since then, the slinky has been used, not only as a toy, but as a teaching tool for college students, as an emergency radio antenna by soldiers, and by NASA in its physics experiments. It has also been used in a musical composition called "Sounds of Venice" by composer John Cage, been displayed in various museums, inducted into the National Toy Hall of Fame, had a jingle created to honour it, appeared in several movies and television shows, been nominated in parliament to be given recognition as the state toy for Pennsylvania, and even had a postage stamp issued in its honour. Wow! And all that because a naval engineer back in 1943 was a bit of a klutz.
2. Doctors in 13th century Scotland recommended the use of which toy, that people mistakenly believe was invented in the 1950s, as a remedy for dislocated backs and to aid in the recovery from heart attacks?

Simply known as hoops back then, hula hoops have been around for many centuries. Their use is recorded as far back as the fifth century during the era of ancient Greece, so it is highly likely they had been in use for some time prior to this. Though having been with us for all that time, they experienced a renewal of popularity in the 1950s. Hoops were given the added title of "hula" some time during the 19th century by British soldiers returning from sea voyages to Hawaii.

They noted the similarity of the hip swaying motion of the hula dance to the same motion required to keep the hoops circling round the waists of users back home. One wonders how many people suffering from dislocated backs undertook this rather radical form of a cure.
3. What are the two missing words from this advertising jingle for a children's game? "It's a race, it's a chase, hurry up and feed their face! Who will win? No one knows! Feed the ... " (what?)

This game was introduced to the public in 1978. Four plastic hippos of varying colours surround the centre of a playing board on which a handful of marbles has been placed. As soon as the game begins, the players push down on the back of their hippos as quickly as possible, and as many times as possible.

This motion connects to springs which sees the hippos stretching out their necks to gobble up as many marbles as possible. The winner of the game is the person whose hippo has swallowed the most marbles. Very intellectual pursuit.

In other words, "Hungry Hungry Hippos" is just a bit of fun, with not much thinking required to play at all. Initially, the names of the four hippos in this game were Henry, Harry, Homer and Lizzie. Lizzie was made redundant at a later date and replaced with Happy, but why this was the case is uncertain.

The names were changed again in 2009, peculiarly so, to Picky Potamus, Bottomless Potamus, Sweetie Potamus and Veggie Potamus.
4. Kites have been around for several thousand years. In which country is it believed they originated?

The Chinese had the perfect materials to make these early kites. Silk for the kite fabric, many interwoven threads of silk for the line, and bamboo to make the kite frame. They used their kites for a number of other purposes in addition to the sheer fun involved in their flying.

These uses included sending messages, testing the strength of the wind, and even giant ones to actually lift men off the ground. How amazing is that? That was almost three thousand years ago. Kite flying then made its way into India and even the Polynesian islands, including New Zealand, but it would be centuries more before they were introduced into Europe. From there, once their recreational and scientific abilities were proven, they emerged in the United States of America, where, some two hundred years later, Orville and Wilbur Wright used them in their initial experiments with flight. So next time you hope into a plane to fly anywhere in the world, spare a thought for the honourable Chinese ancestor of the mighty vehicle in which you are travelling - the humble kite.
5. Though the yo-yo has been around since at least 500 BCE, the word itself comes from the Tagalog language from the Philippines. What does "yo-yo" translate to in this language?

Though most sources, such as Webster's dictionary, ascribe this translation to the Tagalog word for yo-yo, another suggested meaning is that it means "return" as well. What is less clear is whether or not the yo-yo was used as a weapon in this area of the world.


Answer: The effects of karma

The purpose of this ancient game from India was to raise awareness about the role karma plays in the role of the individual, and how certain choices bring about specific results. In the Indian religion of Jainism, which practices non-violence to all living beings, the game was known as "Leela".

Its purpose was to teach moral values and emphasise the role of karma in everyday life. The ladders were the virtues while the snakes represented vices. From India, the game eventually landed in England where its name was changed to "Snakes and Ladders".

The underlying lessons on life were lost along the way and the game simply became good fun instead - unless of course one suffered from ophidiophobia.
7. This is hilarious: In 2001 a British newspaper reported that Queen Elizabeth II had a toy rubber duck in her bathroom. Whether or not this is true, what was also noteworthy about this particular rubber duck?


Answer: It wore a crown

How funny is that, and certainly a good yarn whether it was true or not. Apparently, a painter, hired to repaint the Queen's bathroom, spotted the regal duck there. Once the ubiquitous newspaper "The Sun" got hold of the story and printed it, sales of rubber ducks shot through the roof in England for a short while. Now how could anyone say Her Majesty is a drain on the economy? She generates employment wherever she "goes".
8. The enjoyable - or frustrating - game we know today as chess had its origins in the Gupta Empire in which ancient nation?

Other claimants for the right to be called the birth nation of chess are ancient Afghanistan and Persia. The Gupta Empire in northwest empire existed from 320-550 BCE and during the course of its history, conquered over twenty other nations. These included major portions of lands we know today as Afghanistan and Iran (Persia), so it is likely the real birth of the game chess is mixed up in there somewhere.

This game of skill and ability to think far ahead bases its playing pieces on the art of warfare from way back then. Pawns represented the infantry, knights were the cavalry, elephants evolved into the bishops, and the rooks descended from the early chariots. Today chess is one of the most popular games in the entire world, where millions of people every week, in various settings, continue to be either exhilarated or extremely frustrated by the course of its play.
9. Though the Barbie doll was named after Ruth Handler's daughter, Barbara, from where did Mrs Handler originally get the idea of an adult female doll?

Noticing how her daughter liked to give her baby dolls and paper dolls adult personalities, Ruth Handler of the USA suggested to her husband (who was one of the founders of the Mattel toy company) that the firm design a doll along the same lines. Her suggestion was totally ignored, but Ruth Handler didn't let that deter her. During a European trip with her children, Barbara and Kenneth, in 1956, she discovered Bild Lilli, a German female doll that was just what Ruth had envisaged.

She purchased three of these dolls, gave one to Barbara and took the other two back to the USA.

There, in conjunction with an engineer, she redesigned them and presented her idea to Mattel once more. This time it was accepted and the Barbie doll, complete with her impossible physical statistics, hit the stores in 1959. Since then, she hasn't looked back. Bild Lilli, just for the record, wasn't the sort of girl doll one would really like to take home to meet the parents.

She was originally sold in bars, and considered not suitable for children at all.

Her origins were a post war cartoon that wasn't above making rather suggestive sexual comments.
10. Before the advent of Play-Doh and Silly Putty and the like, we had plasticine with which to play and make our various models. This was invented in 1897 by an art teacher from which European country?

William Harbutt from Bath in England was an art teacher who wanted to have a clay that didn't dry out before his students had time to make adjustments to the work. As a result, he came up with the idea for plasticine. This excellent material, which kept children happy for decades before more modern versions came along, was made from calcium carbonate, fatty acids and petroleum jelly.

It was safe, sterile, could be remoulded and reused over and over, and, more than anything else, it was fun. It is still around today and can be utilised in any number of ways that a fertile mind can envisage. One of these uses, for instance, is in the field of athletics, where it is used to mark the take off position of the feet of competitors in the long jump and triple jump.
Source: Author Creedy 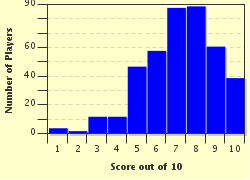 Related Quizzes
1. Are You Game? Average
2. Help, I'm a Piece in a Game! Easier
3. Help, It's Happening Again! Easier
4. "Wordle" Me This! Average
5. Things Found 'Round the Toybox Easier
6. When We Were Young - Toys and Games Easier
7. An Old Fashioned Toybox Very Easy
8. No Computer? No problem! We Had Fun Games!! Very Easy
9. So You Think You Know About Wordle ... Easier
10. The International Phenomenon that is Wordle Easier
11. Fifteen Minutes of Fun Easier
12. Best-Selling Retro Toys Easier