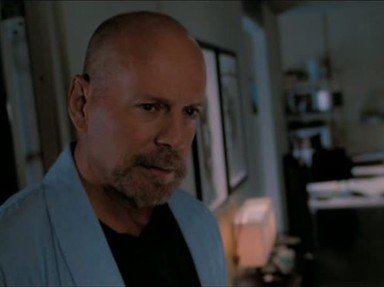 Match the co-stars and a one line description to the Bruce Willis movie.
This is a renovated/adopted version of an old quiz by author BOAL16


Answer: Die Hard with a Vengeance

A terrorist calling himself "Simon" contacts the police, claiming responsibility for a bombing, and threatening a repeat, unless McClane goes to Harlem wearing a racist sandwich board. The inevitable bad feeling ensues, and a black man called Zeus Carver (Samuel L. Jackson) takes exception, but saves the policeman from an angry mob. "Simon" (Jeremy Irons) insists that the two men both carry out some crazy timed errands, sending them all over the city. He informs the police that there is a bomb in a school. He's really misdirecting them, because he is going to carry out a heist at Wall Street. And "Simon" is the brother of the villain McLane killed in "Die Hard", so he has a big grudge.
2. Madeleine Stowe & Brad Pitt. Time travel and a deadly virus.

In the Terry Gilliam movie, "12 Monkeys" (1995), Bruce Willis plays James Cole, who is a prisoner in 2035 and is selected to be sent back in time to try to prevent a deadly virus that, in 1996, wiped out much of humanity.

The time travel doesn't work to plan, and he is sent back earlier, to 1990. He ends up in a mental hospital where he is examined by Dr Kathryn Railly (Madeleine Stowe). He also encounters another inmate, Jeffrey Goines (Brad Pitt), who seems to be an extremist who might have been involved in transmitting the deadly virus. Cole escapes and returns to the future. He's debriefed and told that the "Army of the Twelve Monkeys" are to blame, an organisation that Goines is associated with. Further time travel and investigation finds that this is a wild goose chase. Someone else is the source.
3. Meryl Streep & Goldie Hawn. Desperate to keep their looks.

In the 1992 movie "Death Becomes Her", Meryl Streep and Goldie Hawn play two women, Madeline and Helen, who battle for the affections of a plastic surgeon played by Bruce Willis, called Ernest. Madeline steals Ernest from Helen, and later finds that Helen has become youthful and more beautiful.

She is put in touch with the vendor of a mysterious rejuvenation potion. Murder, reanimation and grotesque slapstick comedy ensue.
4. Emily Lloyd & Joan Allen. Teenager and Vietnam vet uncle.

In Norman Jewson's 1989 movie, "In Country", Emily Lloyd plays Samantha, a high school graduate from Kentucky. Her father had died in Vietnam, having left for war before she was born. Samantha's mother, Irene (Karen Allen), has remarried and moved to another town. Samantha doesn't want to live with her mother, preferring to stay with her uncle Emmett (Bruce Willis), a Vietnam veteran afflicted by post-traumatic stress disorder, and find out what she can about the father she never knew.
5. Milla Jovovich & Gary Oldman. Taxi driver's fight to save Earth.

In Luc Besson's "The Fifth Element" (1997), Bruce Willis plays Korben Dallas, a 23rd century taxi driver, who gets involved in a race to save the earth from a "great evil". Jean-Baptiste Emanuel Zorg (Gary Oldman) is a businessman working for evil. Leeloo (Milla Jovovich) is the "Fifth Element", a strange resurrected humanoid with extraordinary powers, and the best hope of defeating the evil. Dallas teams up with Leeloo to try to save the planet.
6. Ving Rhames & John Travolta. Multi-strand story in Los Angeles.

"Pulp Fiction" is a 1994 film by Quentin Tarantino. Multiple story strands play out that are interlinked in some way, in a pulpy crime-based LA movie. Bruce Willis plays Butch, a has-been boxer on the run from Marcellus, a criminal kingpin played by Ving Rhames.

After shared adversity, the two men make their peace. Other stars include John Travolta and Samuel L. Jackson as a pair of hitmen employed by Marcellus, and Uma Thurman as his wife. Christopher Walken steals the show with a hilarious cameo. Viewer discretion advised!
7. Joseph Gordon-Levitt & Emily Blunt. Time-travel assassinations.

"Looper" is a sci-fi movie from 2012. Its central theme is an arrangement when people from the future, in 2074, arrange to send people they wish to dispose of back in time to be killed by assassins in the present day. The killers are called "loopers" and are paid in silver bars attached to the victims. But there's a twist. When a looper reaches the year 2074, he gets sent back with gold bars attached to be dispatched by his younger self. They call this "closing the loop".

"Red" is a 2010 movie about a group of retired black ops agents or assassins, retired from the secret services, who find themselves targeted for elimination by an unknown assassin. Bruce Willis, Morgan Freeman, John Malkovich and Helen Mirren join forces against the threats from Karl Urban and Richard Dreyfuss, who are working for a crooked politician.

In the 1994 movie, "Nobody's Fool", Paul Newman plays Sully, a badly behaved and disputatious old man, who lives with his landlady, Beryl (Jessica Tandy). He flirts with Toby (Melanie Griffith), the wife of Carl (Bruce Willis), who is his adversary and object of his practical tricks and law suits. Various wins and losses occur, and Sully reconciles with some estranged family members.
10. Liv Tyler & Steve Buscemi. Drillers in Space!

"Armageddon" is a 1998 blockbuster movie from Michael Bay whose high concept is that a planet-killer asteroid is on course for earth and the only way to stop destruction of the human species is to blow it up with trained drillers placing the bombs in the right places.

The driller team is trained to be astronauts, and they travel to the asteroid. After heroic sacrifice the planet is saved.

Ben Affleck wasn't popular with Michael Bay when he suggested that training astronauts to drill might be easier than making astronauts out of a bunch of drillers.
Source: Author Upstart3