I hope you will enjoy having a look at the career of the English actor, Sean Bean.

Share on Facebook
Share on Twitter
Share by E-Mail
Author
Beckyel
Time
3 mins
Type
Multiple Choice
Quiz #
181,257
Updated
Jul 23 22
# Qns
10
Difficulty
Average
Avg Score
6 / 10
Plays
1631
This quiz has 2 formats: you can play it as a or as shown below.
Scroll down to the bottom for the answer key.

Alec Trevelyan was 006, a top agent of the British Secret Service, who Bond believed had died in an explosion in a chemical weapons plant. Far from dying, Trevelyan was behind a plot to take control of GoldenEye, a satellite which triggered a nuclear pulse to destroy electronic equipment. Trevelyan planned to destroy London with this weapon, and Bond (Pierce Brosnan) had to track him from Russia to Cuba to put a stop to his plans.
2. What was the name of Bean's character in the 1992 movie 'Patriot Games'?

Harrison Ford was Jack Ryan, a CIA agent, who foiled an assassination attempt by the IRA. During the failed attempt to kill Lord Holmes, one of the terrorists was killed. Sean Miller (Bean) set out to avenge his brother's death, and Jack Ryan was left the dangerous task of protecting his family in their remote home.
3. Who played Anna Karenina to Bean's Vronsky in the eponymous Russian tale written by Leo Tolstoy?

Anna Karenina is the wife of Karenin, and mother to a young son. She has an affair with the dashing Count Vronsky, pushed into his arms because her husband is cold and unloving. Finally Karenin finds out about their affair. The sad story ends with the death of Anna, one of the most famous suicides in literature. James Fox played Karenin and Alfred Molina Levin.
4. What was the name of Bean's character in the movie 'Black Beauty'?

'Black Beauty' is the moving tale of the life of a horse, told by the horse. Black Beauty, a stallion, is born on Farmer Grey's farm, then he is moved from home to home, beginning with a rich family and then going on to a mean owner. He is then sold to someone who rents horses, then he goes to a horse fair and is sold again. Finally, he is bought by an old friend, Joe Green, and the story ends happily.
5. In which movie did Bean play a character called Paul Sheppard?

Tom and Thomas are twins; one lives in an orphanage and the other lives with his adoptive father. Although they did not actually know of the existance of the other, they could feel a bond with what was believed to be an imaginary friend. However, when Tom runs away from the orphanage, he meets Thomas.

When Thomas is kidnapped by child smugglers, Tom goes after him to rescue him and keep the two of them together. Sean Bean plays the part of Thomas' father, an unusual role for him, as he is a kind and sympathetic man, not a villain.
6. Which character did Bean play in the 'Lord of the Rings' trilogy?

'Lord of the Rings' tells the story of Frodo and his companions as they find and destroy the One Ring. Boromir was a proud man, one of the men of Gondor. He was chosen as a companion at the Council of Elrond. He was brave and valiant, but also fascinated by the power of the ring.

He attempted to take the ring from Frodo, then instantly repented. He left the fellowship and set off for Mordor on his own, but was killed defending Merry and Pippin from a band of orcs.
7. Who starred with Bean in the 1998 movie 'Ronin'?

Ronin are men who are specialists in many fields, and who are available for hire. An Irish girl, Deirdre, hires several of them to take a suitcase from a man before he can sell it to the Russians. However, as soon as the suitcase has been acquired, a member of the team takes it, for his own motives.

The hunt for the suitcase reveals that people's loyalties are not what they appeared to be.
8. In which movie did Bean co-star with Alex Kingston?

Bean plays the part of Jason Locke, a gangster just released from prison. Alex Kingston is is wife, Lisa. Locke feels bitter about his former friends, who seem to be living comfortable lives while he has been in jail. He gets involved with drugs and also worries about whether his wife is faithful to him. All the time he is plotting revenge on his former friends, who allowed him to fall so low while they were doing so well.

The film is loosely based on a triple murder that took place in Essex and is known as the Range Rover murders.
9. Which of the following actors did NOT star with Bean in the movie 'Stormy Monday'?

Bean is Brendan, a janitor in a nightclub in Newcastle. The club is owned by Finney, (Sting), but he is under pressure to sell it. When the American boss of the purchaser (Cosmo, played by Tommy Lee Jones) comes to Newcastle, Brendan finds himself falling in love with his companion Kate (Melanie Griffith). Cosmo is used to getting his own way and he is rather taken aback when he finds that there are people who will not give in to him.
10. With whom does Bean star in 'Don't Say A Word'?

Michael Douglas is a psychiatrist, who examines Elisabeth, a very disturbed young woman. When he has done so, he discovers that his daughter has been kidnapped. The kidnapper, Koster (Bean), wants Dr. Conrad to get Elisabeth to reveal a secret number for him.

This is the key to the whereabouts of a rare gem, stolen ten years earlier. Once he has discovered this information, his daughter will be released.
Source: Author Beckyel

This quiz was reviewed by FunTrivia editor linkan before going online.
Any errors found in FunTrivia content are routinely corrected through our feedback system.
Most Recent Scores
Nov 21 2022 : Guest 193: 3/10
Nov 20 2022 : TERRYROYHURST: 3/10 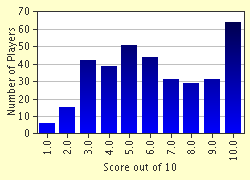