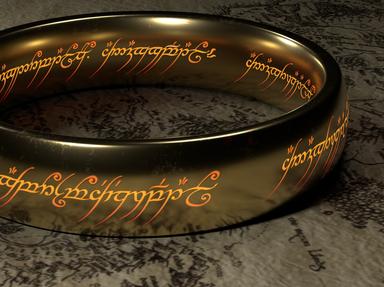 Quick Question
Who, at Amon Hen, tried to take the ring from Frodo?
Sub-Categories:

Fellowship of the Ring (27 quizzes)

'Lord of the Rings' Trilogy 10 questions
Average, 10 Qns, Gwynston, Dec 16 11
This is a quiz about director Peter Jackson's 'Lord of the Rings' movie trilogy based upon the books by J.R.R. Tolkien. I hope you enjoy this, my first ever quiz!
Average
Gwynston
23559 plays
2.

Which "Lord Of The Rings" Movie Was It?

10 questions
Average, 10 Qns, Polaris101, Mar 19 10
A quiz on one of the best movie trilogies ever made. Choose which "Lord Of The Rings" movie is being described, one question is from an extended version.
Average
Polaris101

"Lord of the Rings" Character Riddles 15 questions
Easy, 15 Qns, cinnabun, May 18 10
In this quiz, for every question you'll find a riddle and the answer is a character. Also, please keep in mind that this quiz is based on the movies only. Enjoy!
Easy
cinnabun
19956 plays
4.

'Lord of the Rings' Last Names 10 questions
Very Easy, 10 Qns, kittyr, Apr 19 03
This quiz is about 'Lord of the Rings' characters names as well as the actors that play them. I will give you the name of a character or an actor and you must click on the answer that you believe is their last name. Enjoy!
Very Easy
kittyr
15960 plays
7.

Aragorn, Ranger or King? 10 questions
Easy, 10 Qns, morgana03, Feb 19 05
My first quiz. Features mostly Aragorn related questions. Will be from the extended DVD. May have one or two questions from the "Two Towers".
Easy
morgana03
14790 plays
8.

Actors in "The Lord of the Rings" 10 questions
Tough, 10 Qns, leading_lady, Jun 21 06
Welcome to my "Lord of the Rings" quiz. I will give you a sentence or two and you tell me which character is played by the cast member I am describing. Most of this information can be found on the extended edition DVD. Corrections are welcome!
Tough
leading_lady
11916 plays
10.

Actors and Actresses from "Lord of the Rings" 10 questions
Easy, 10 Qns, LOTR1Fan, Apr 22 11
This is a simple quiz about the actors and actresses from the "LOTR" movies "FOTR" and "TTT", yet there is some stuff on "ROTK" in my interesting info, so if you don't want the movie to be spoiled, I would suggest not taking the quiz. Enjoy!
Easy
LOTR1Fan
9822 plays
11.

Lord of the Rings

10 questions
Average, 10 Qns, Anck-su-namun, Oct 21 13
Middle Earth has been the fascination of many fans since "The Lord of the Rings" was made into three movies. So now here is your chance to test your knowledge of them.
Average
Anck-su-namun
6237 plays
13.

"Lord Of The Rings" Extended Version 15 questions
Tough, 15 Qns, ginnyweasley, Sep 03 16
Questions about the trilogy of "The Lord of The Rings" movies. Included are behind the scenes information found in each of their DVD special features. Information and additional scenes from the special extended DVDs are not included here.
Tough
ginnyweasley
Sep 03 16
6291 plays
15.

10 questions
Easy, 10 Qns, JanIQ, Aug 11 13
As an amateur of history, I found many analogies in the "LOTR" movies. How many scenes can you identify from the historic parallel? History knowledge might be useful, but is not strictly necessary. Warning: this quiz may contain spoilers.
Easy
JanIQ

You Shall Not Pass!

10 questions
Easy, 10 Qns, WesleyCrusher, May 22 16
Who can forget Gandalf's great quote when facing the Balrog? However, it could have been used in many other places in the trilogy. I have rewritten ten scenes for you - who "shall not pass" in each one?
Easy
WesleyCrusher

'Lord of the Rings' on Location

The Big Trio. "The Lord of the Rings" 10 questions
Average, 10 Qns, quadsareus, Aug 06 20
My entire quiz was put together using the special extended DVD edition. This is my first quiz, I hope you enjoy it as much as I did doing it.
Average
quadsareus
Aug 06 20
537 plays
19.

The Animated "LOTR" 10 questions
Difficult, 10 Qns, Catamount, May 23 04
Before Peter Jackson's trilogy, there was the animated "LOTR". See how much you remember about the movie.
Difficult
Catamount
1758 plays
20.

"The Lord of the Rings" - Creating the Symphony 15 questions
Very Difficult, 15 Qns, traderider, Jan 01 05
If you love Peter Jackson's movie trilogy, then you likely enjoy Howard Shore's music, too. The making of the 2-hour Symphony is detailed in the "Creating the Lord of the Rings Symphony" DVD. Do watch the DVD first before taking the quiz. Good luck!
Very Difficult
traderider
1305 plays
21.

Locations in the "Lord of the Rings" Films 10 questions
Tough, 10 Qns, canadianLOTR, Oct 21 12
Do you know where the "Lord of the Rings" trilogy scenes were filmed? WARNING The information in this quiz in not found by watching the movies by Peter Jackson, but found in the Appendices in the Special Extended DVD Edition.
Tough
canadianLOTR
297 plays

It was Boromir who tried to take the ring. Aragorn found the wary hobbit at Amon Hen and knows something has gone wrong when Frodo backs away from him:
Aragorn: "Frodo, I swore to protect you."
Frodo: "Can you protect me from yourself? Would you destroy it?"
A good question as our hero has feared that like Isildur he wouldn't be able to destroy the ring either but when Frodo holds out his hand, Aragorn after a while simply closes his fingers around it and moves back saying: "I would have gone with you to the end. Into the very fires of Mordor." - From quiz: Aragorn, Ranger or King?
Arwen.

When Aragorn first meets Arwen she is singing and he thinks that he has strayed into a dream. Then in the first movie she uses her elvish powers to cause a river flood (against the ringwraiths) in the form of galloping horses. - From quiz: "Lord of the Rings" Character Riddles
The Fellowship Of The Ring.

Merry says it to Pippin when they are trying to distract the Orcs so that Frodo can get away. - From quiz: Which "Lord Of The Rings" Movie Was It?
Andy Serkis.

Andy Serkis also provides all movements and actions of Gollum. He had to wear a blue suit with sensors on it so that the computer could read his movements, and make Gollum's reactions look as real as possible. - From quiz: Actors and Actresses from "Lord of the Rings"
Sir Ian McKellen.

In Bree at the Pancing Pony right after Frodo used the ring the first time and Aragorn makes his first appearance to the hobbit: "You draw far too much attention to yourself... Mr. Underhill." - From quiz: Aragorn, Ranger or King?
Frodo.

To anyone who just took this quiz: If you are one of those people who is all mad about this riddle and want to send me an angry message... please don't. I've been sent a whole bunch already. This riddle is not supposed to offend anyone. It was only a joke. I love "Lord of the Rings" as much as the next person and you don't have to prove it by sending me an angry message. I understand that some fans are mad but there is no reason to be. I'm sorry if I offended anyone but I swear it wasn't my intention. To quote the great Bilbo Baggins, "It was just a bit of fun!" - From quiz: "Lord of the Rings" Character Riddles
This is category 3631
Last Updated Jun 24 2021 7:25 PM