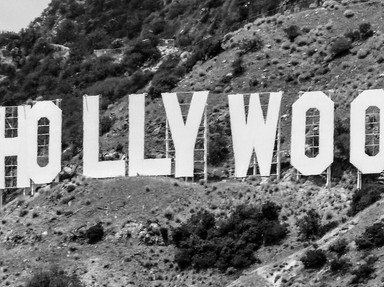 Ten of My Favorite Quotes from Movies Quiz

I will give you some quotes on the left and some movies on the right. All you have to do is match the quote with the movie it came from.

Baby (Jennifer Grey) tells Johnny (Patrick Swayze) that she carried a watermelon when Billy (Neal Jones) says that Baby came with him. After she leaves, she realizes how dumb that must have sounded and said to herself, "Carried a watermelon?"

"Dirty Dancing" is the story of true love found in dancing. Johnny Castle is a poor man working at Kellerman's, teaching dance to the women. Frances "Baby" Houseman is from a wealthy family staying there during the summer.
2. "That's all I have to say about that."

Forrest Gump (Tom Hanks) says this line a few times in the movie. When explaining something to someone and he doesn't wish to tell them anymore, he says, "That's all I have to say about that." He says it when he is talking about Bubba dying.

"Forrest Gump" was a slow man. Yet somehow, he managed to do a lot in his life. He was in love with Jenny (Robin Wright), but they were not together for most of the movie. She was a hippie. Forrest played football in college, fought in Vietnam, and owned a shrimp boat. He tells his life story as he sits at the bus stop waiting for a bus.
3. "Good. Bad. I'm the guy with a gun."

In "Army of Darkness," Ash (Bruce Campbell) works at S-Mart. In the past (there are two movies before this one in the trilogy: "Evil Dead" and "Evil Dead 2"), he opened the "Necromonicon Ex Mortis", aka "The Book of the Dead". This caused the evil demons to be released. He said the evil got into him, so he sawed off his arm, but it didn't stop.

He returns in time because of the evil people, and while many want to harm him, some try to help him. Ash gets a gun from one of the local people (this is only seen in the director's cut. In the regular version, it's a bit odd because he has no gun, and then he suddenly does). Ash calls his gun his "boomstick". He fights another demon and kills her. He's told they have to find the book because if the "Deadites" get them, it would be bad for the human race as a whole. Plus, it's the only way Ash can return home.

Ash sees himself in a mirror which he breaks, creating a bunch of little Ash men. One of which gets swallowed. He then comes out of Ash's shoulder as "Bad Ash". Bad Ash torments Ash calling him "Good Ash". Ash shoots bad Ash and says, "Good. Bad. I'm the guy with the gun."
4. "Anybody want a peanut?"

When Vizzini (Wallace Shawn), Fezzik (André the Giant), and Inigo (Mandy Patinkin) are on the boat, Fezzik and Inigo are driving him crazy, talking in rhyme. Vizzini gets annoyed and tells them, "No more rhymes now; I mean it." Fezzik replies, "Anybody want a peanut?"

"The Princess Bride" is the story of true love between Buttercup (Robin Wright) and Weasley (Cary Elwes). He worked in her stable and always told her, "As You Wish", which was his way of saying, "I love you". Then he left, and she was kidnapped by Vizzini, who wanted to start a war. Weasley was thought dead, but it turned out he was the Dread Pirate Roberts.
5. "The love inside, you take it with you."

Sam Wheat (Patrick Swayze) said this to Molly (Demi Moore) right before he left to go to Heaven at the end of "Ghost". She and Oda Mae (Whoopi Goldberg) watch as Sam disappears.

Sam and Molly were a couple and had just bought a house together. Sam was an investment counselor, while Molly was an artist. Sam's coworker, Carl (Tony Goldwyn), had Willy Lopez (Rick Aviles) mug Sam, but Willy killed him. Sam returned as a ghost to save Molly with the help of a quack psychic named Oda Mae (Whoopi Goldberg).
6. "Men are rats, listen to me, they're fleas on rats, worse than that, they're amoebas on fleas on rats."

Danny (John Travolta) learns that Sandy (Olivia Newton-John) didn't return to Australia. However, he wants to look cool to his friends, the T-Birds, so he treats her badly. French (Didi Conn) tries to make her feel better. She tells her this quote and that girls can only depend on their fathers when it comes to men.

"Grease" is a musical about seniors in high school, their friendships, and their romantic relationships. Danny and Sandy are the two main characters. She is Australian, and Danny thinks she went back after the summer. But she tells him, "We had a change of plans." And after he tries to look cool in his friends, she calls him "a fake and a phony". But they are in love, so he decides he needs to be more jock-like and letter in a sport. She decides she needs to be looser.

Fun fact: Olivia Newton-John had to be sewn into the tight leather pants she wears at the end of the movie because they were so tight. She couldn't drink or eat much while she had them on either. Also, the cast's reaction is genuine; they hadn't seen her in the costume until then.
7. "It's not a tumor; it's not a tumor at all!"

Mr. Kimble (Arnold Schwartzenegger) is an undercover kindergarten teacher. He tells the children they will play a game called "Who is my daddy, and what does he do?" The children try to figure out what Kimble's father does. He rubs his head, and one of the children ask him what's wrong. He says he has a headache, and Lowell (Ben McCreary) tells him, "It might be a tumor," to which Mr. Kimble responds, "It's not a tumor; it's not a tumor at all!"

John Kimble is a detective trying to find Cullen Crisp's (Richard Tyson) wife before he does. He was only supposed to go to Astoria with Detective Phoebe O'Hara (Pamela Reed) was supposed to be the kindergarten teacher, but she got sick, and he had to go in to protect the cover. He was then forced to stay.
8. "You listen, on this ship you are to call me Idiot, not You Captain. I mean...you know what I mean."

King Roland (Dick Van Patten) asks Lone Starr (Bill Pullman) to save his daughter Princess Vespa (Daphe Zuniga) and agrees to pay him a lot of money. However, the princess has some entitlement issues, and Lone Starr is just an everyday person, so she feels she's above him.

The Winnebago loses power due to lack of fuel, and they are forced to crash into a desert. When Lone Starr asks her if she's okay, she answers, "No, you idiot, where'd you learn to fly?" When they land, she is angry at him for crashing and mad at her because of her arrogance and for calling him an idiot. He goes to the back of the Winnebago and says, "You listen, on this ship, you are to call me Idiot, not You Captain. I mean...you know what I mean."
9. "Just because you've got the emotional range of a teaspoon."


Answer: Harry Potter and the Order of the Phoenix

Harry (Daniel Radcliffe), Hermione (Emma Watson), and Ron (Rupert Grint) are in the common room of Gryffindor talking about Cho. Harry says she was crying, and Hermione explains all the different feelings Cho must be feeling. Ron doesn't understand how anyone could feel all those emotions at once. Hermione tells him, "Just because you've got the emotional range of a teaspoon."

In "Harry Potter and the Order of the Phoenix" Harry, Hermione and Ron are now fifth year students. Just about nobody believes Harry about the return of Voldemort (Ralph Fiennes), and on top of that their is a new Defense Against the Arts teacher, Dolores Umbridge (Imelda Staunton) who is making life miserable for everyone.
10. "Don't mess with me, man. I'm a lawyer!"

Peter Banning (Robin Williams) is back in Neverland learning how to be Peter Pan again so he can save his children Jack (Charlie Korsmo) and Maggie (Amber Scott). The new leader of the lost boys, Rufio (Dante Basco), isn't very fond of Peter initially because Peter grew up and forgot everything.

The kids and Peter have dinner, but Peter doesn't see any food because the kids all imagine it, and he can't do it. Rufio starts insulting him, and he tries to insult him back. Peter finally comes up with insults, and the kids yell, "Bangarang, Peter!" And he ends with, "Don't mess with me, man. I'm a lawyer!" He then can imagine the food they see and throws it at Rufio.
Source: Author Ilona_Ritter

Go to Quotes from Movies Quizzes