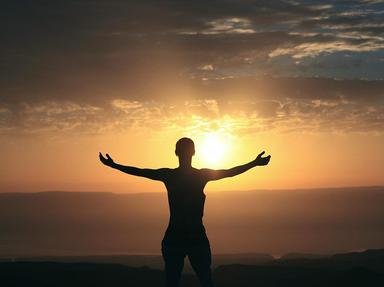 A mix of 10 Religion questions, submitted by 10 different FunTrivia players! The first few questions are easy, but the last couple are tough!

Quiz Answer Key and Fun Facts
1. In which European city did the Popes reside during the "Babylonian Captivity" (1305-1378 CE)?

Avignon is located in Provence in southeastern France. Avignon would remain under papal control until the late 1700s. The influence of the kings of France led to selection of French clergy to the papacy during the Captivity. This is distinct from the Babylonian Captivity of the 6th century BCE, when a significant number of people from the Kingdom of Judah were held captive in Babylon, capital of the Neo-Babylonian Empire.

Question by player bernie73
2. What is the most widely practised religion in the United States?

Roughly 75% of Americans identify themselves as being Christian. Of those who claim Christianity as their religion, the majority are Protestants and about one quarter are Catholics. It is interesting to note that approximately fifteen percent of Americans claim no religious affiliation at all.

Question by player johnnycat777
3. According to the Bible, who built an ark after God told him the world was going to be flooded?

Noah's ark is believed to have come to rest on Mt. Ararat which is located in Turkey. Some people in the last century have claimed that they have seen remains of the boat sticking up out of the ice. But, after so long on the mountain, the wooden boat would probably have rotted or been broken up by the ice. Noah's story is told in chapters 6-9 of the Book of Genesis.

Question by player goobas
4. In which of these Protestant Christian denominations do believers engage in worship on Saturdays rather than Sundays?

Seventh-Day Adventism grew out of two movements. First is Sabbatarianism, the belief that worship should be on the original Day of Rest as established in Genesis, which is the Seventh Day, which in Judeo-Christian calendars is Saturday. Second is Millerism, a movement that arose in upstate New York which held the Second Coming of Christ (or Second Advent) would be in 1843.

When He didn't show up, a visionary named Ellen G. White, with the help of other preachers, established a church in Battle Creek, Michigan, some twenty years later that united the two streams of thought. Seventh-Day Adventists now believe that the Second Advent will arrive sooner than you think, but they do not specify a date.

They also believe in the Trinity and the inerrancy of Scripture, but *not* in the immortality of the soul, and therein lies another departure from mainstream Protestant belief.

Question by player gracious1
5. The Dead Sea Scrolls were biblical texts found in hidden caves in the area of Qumran, near Israel. In what languages were the Scrolls written?

Question by player milliesmall
6. A member of which of the following Christian denominations would be most likely to refuse to have a blood transfusion as part of his or her medical treatment?

The Jehovah's Witnesses are a major Christian denomination, with over eight million members worldwide. One of their best known beliefs is the refusal to accept a blood transfusion, even in cases of a medical emergency. This not only includes whole blood, but most blood products as well.

This doctrine is based on their interpretation of various Biblical texts. Adherence to this doctrine has sometimes led to legal complications, particularly where the lives of children below the age of consent are at risk. Contrary to widespread belief, the Mormon Church, or Church of Jesus Christ of Latter-day Saints, and the Seventh Day Adventist Church have no prohibition against donating blood or receiving blood transfusions.

Question by player daver852
7. According to the Gospels what did the crowd shout during Jesus' "Triumphal Entry" into Jerusalem?

This incident is found in Matthew 21, Mark 11 and John 12. Matthew and John's account mention the word "hosanna" which is a Greek transliteration of a Hebrew word that originated as a prayer seeking God's help, but by New Testament times was used as a shout of joy and welcome. In Hebrew it means "save, we pray".

Question by player bigwoo
8. What is the name of the tall hat worn by the Roman Catholic Pope?

Question by player dcpddc478
9. Under Islamic law, how many wives is a man allowed to have at one time?


Answer: up to four

Polygamy is legal under Islamic law and a man may be married to up to four women at a time, as well as being allowed to have sex with any slaves or prisoners of war, while being married to these four. However, he can only be married to as many as he can take care of. According to Sura 33.50, Muhammed was allowed more latitude in his marriages.

Question by player habitsowner
10. Stealing love on the side is a dangerous practice. How was King David punished for his adulterous act?


Answer: The son of his adultery died.

After David lay with Bathsheba and she conceived he tried to get her husband, Uriah to lie with her but he failed. As a result he had to ensure that Uriah was killed in battle. God then sent Nathan the prophet to him. David was told that the sword would not depart out of his house and that the child would die. Read II Sam. 11-12 for further details.