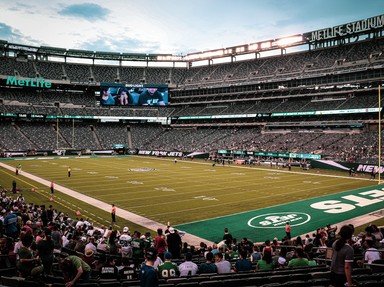 I confess to you from the start that most of these football trivia questions are difficult, but I believe the upside will be the fascinating and entertaining stats and stories and trivia they reveal.

Quiz Answer Key and Fun Facts
1. Who was the first NFL quarterback to pass for over 400 yards in three consecutive games?

What?! Ryan Fitzpatrick!? Yes. Him. In 2018, while playing for the pre-Brady Tampa Bay Buccaneers, Fitzpatrick faced the Pittsburgh Steelers on a Monday night and made history as he passed for 411 yards. They lost the game 30-27 but it was Fitzpatrick's third consecutive game passing for over 400 yards, the first quarterback to do so. That same season he tied Dan Marino and Peyton Manning for having 4 games in a single season with 400 yards or more in those games.
2. Before becoming the San Francisco 49ers head coach in 2011, Jim Harbaugh had an NFL career as a quarterback from 1987 to 2000, throwing 129 touchdowns. Four quarterbacks who became NFL head coaches after retiring as players had more touchdown passes than that. Who was NOT one of them?

Bob Waterfield coached the Los Angeles Rams from 1960 to 1962, but he only had 97 career touchdown passes.

Now, you might ask, "Hey what about Otto Graham?" Well, he indeed threw for 176 touchdowns and indeed also coached the Washington Redskins from 1966 to 1968. However, 86 of those TDs were thrown when he was on a team that was in the old All American Football Conference, not the AFL or NFL.
3. Since the 1970 NFL merger, a handful of quarterbacks have passed for over 400 yards in two consecutive games. Who was the first to do it?

Yes, 20-17 is the most common score by far in the history of the NFL's nearly 17,000 games. The score 20 to 17 has been the outcome of nearly 300 games. Those other scores: 50-28, 66-0, and 46-9 are among the rarest scores occurring. The San Diego Chargers defeated the Miami Dolphins 50-28 on September 7, 1986; on October 10, 1920 the Rochester Jeffersons beat Fort Porter 66-0; and on September 10, 2017, the Los Angeles Rams upended the Indianapolis Colts 46-9.
5. While this sterling college football team has been known for their great offensive players, Ross Browner remains one of the most decorated defensive lineman in the history of college football. He played defensive end for what school in 1973 and 1975-1977?

Playing for the Fighting Irish of Notre Dame, Browner amassed 340 tackles, 77 of which were for a loss of yards totaling 515 yards. He was a unanimous All-American in 1976 and 1977. In 1976 he won the Outland Trophy for best lineman in the country. In 1977 he won the Lombardi Trophy as the country's best lineman and the Maxwell Award for the country's best player. And he is the first player in history to win the UPI Lineman of the Year Award twice.
6. Two of these college quarterbacks have started and won four straight BCS bowl games. Who are they?

Pat White of West Virginia had been the first and only QB for a long time to achieve that distinction, but then E. J. Manuel of Florida State became the second quarterback in history to start and win four consecutive Bowl games when his Florida Seminoles won the Orange Bowl in 2013. Pat White led the West Virginia Mountaineers to a freshman year win over Georgia in the Sugar Bowl in 2006.

The next year, he beat Georgia Tech in the Gator Bowl, and the year after that he defeated Oklahoma in the Fiesta Bowl.

His senior year Bowl victory was against North Carolina in the Meineke Car Care Bowl. E.J.Manuel's four consecutive Bowl victories were against West Virginia in the 2010 Gator Bowl, South Carolina in the Chick-fil-A Bowl, Notre Dame in the Champs Sports Bowl, and Northern Illinois in the Orange Bowl.
7. Which college player was the first to ever rush for 20 touchdowns and pass for 30 touchdowns in one season?

Jimmy Johnson was told he would be inducted into the Pro Football HOF Class of 2020 during a live moment on "FOX NFL Sunday." Dave Baker, the President of the HOF in Canton, Ohio, walked into the TV studio and surprised the panel of commentators. Johnson's pro football resume include back-to-back Super Bowl wins with the Dallas Cowboys in 1993 and 1994, and a 9-4 playoff record.

He was inducted into the College football HOF, also as a coach, back in 2012. He had amassed a 52-9 record with the Miami Hurricanes from 1984-1988 and won a national championship in 1987.
9. Which of these gentlemen called radio play-by-play for the Oklahoma Sooners football team?

Both Walter Cronkite and Curt Gowdy called radio play-by-play for the Oklahoma Sooners football team. Walter Cronkite called the games on the radio in 1937 while Curt Gowdy handled the task from 1945 to 1950. Cronkite was only 21-years-old when he called the games for an Oklahoma City radio station. Gowdy was working in Cheyenne, Wyoming when he was offered the job in Oklahoma by CBS's radio station KOMA.
10. Three of the following quarterbacks defeated the Notre Dame football team three years in a row. Which one did not?

Well, it sure wasn't Joe Theismann, the great Washington Redskins quarterback, because in his college career he was a stand-out quarterback star playing for Notre Dame.

Mike Phipps the Purdue Boilermaker quarterback defeated Notre Dame on September 30, 1967, 28-21. He beat them again in 1968, and then for a third time in 1969.
Playing for the USC Trojans, Matt Leinart beat Notre Dame three times in his college career, beating The Fighting Irish quarterback Brady Quinn each time, in 2003, 2004, and 2005. Andrew Luck, the Stanford Cardinals quarterback beat Notre Dame in 2009, 2010, and 2011.
Source: Author Billkozy


Other Destinations
Explore Other Quizzes by Billkozy