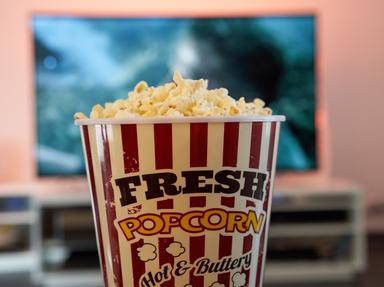 Trivia quizzes on the topic of TV & Movies Mixture. How much do you know?

Which Witch Is Which? 15 questions
Tough, 15 Qns, hotcocoa, Apr 16 05
There have been many famous witches on TV shows and the big screen, so I thought I'd make a quiz about them. Each question has a brief description of the witch, and/or where you might see this witch. Have fun!
Tough
hotcocoa
2592 plays
62.

How Can I Tell If He Loves Me So?

10 questions
Average, 10 Qns, napierslogs, Jul 10 13
'The Shoop Shoop Song' tells us that "It's in His Kiss", but sometimes there are much more obvious clues. This quiz is dedicated to the memorable proposals from TV and movies.
Average
napierslogs
1017 plays
64.

The Men Behind the Joker 10 questions
Difficult, 10 Qns, stingjc, Feb 25 07
How much do you know about the men that brought to life the most dangerous of supervillains? Here's a quiz about the people behind Batman's arch-nemesis, the Joker.
Difficult
stingjc
2451 plays
65.

TV and Movie Characters Behind The Nickname 10 questions
Average, 10 Qns, darksplash, Dec 25 17
Many characters on television and in the movies are known by nicknames. Let's see how many of these you can match to their real names.
Average
darksplash

TV and Film Spanning the Atlantic 2 10 questions
Average, 10 Qns, EnglishJedi, Oct 26 14
Another mixture of movie and TV trivia from both sides of the Atlantic Ocean.
Average
EnglishJedi

Stargate--Movie and Television Series 10 questions
Tough, 10 Qns, aroura_leigh, Feb 03 09
A short quiz to test your knowledge of "Stargate SG-1", the television show; "Stargate", the movie; and their relation to one another.
Tough
aroura_leigh
1896 plays
70.

Flexible Talents 10 questions
Average, 10 Qns, Saleo, Dec 25 15
Some people have both Oscar and Emmy nominations to their name. Take this quiz and learn about some of them and their performances.
Average
Saleo
Dec 25 15
606 plays
71.

Speechless 10 questions
Average, 10 Qns, Daaanieeel, Dec 15 11
Sometimes, characters that don't say a word are just as interesting as those who do. In this quiz, we'll explore ten characters of the big or small screen that are absolutely speechless!
Average
Daaanieeel
849 plays
74.

Action Character Names 10 questions
Difficult, 10 Qns, robert362, Dec 18 12
This is a look at some character names from old-time tv and movies that instantly suggest the "action" nature of the show.
Difficult
robert362
2574 plays
75.

Zac Efron Quotes From TV & The Movies 10 questions
Average, 10 Qns, wackyzacky, Dec 24 08
So you think you know all Zac's movies word for word? See how you go with this quiz.
Average
wackyzacky
1290 plays
77.

TV to Movie Actors 20 questions
Impossible, 20 Qns, TonyTheDad, May 26 03
Two or 3 TV shows are listed. Pick an actor from each, then determine a movie they starred in with the other(s). If there're more than one movie that fit, enter the first made. Note: The TV shows aren't necessarily made before the movies.
Impossible
TonyTheDad

Top ER 10 questions
Tough, 10 Qns, abechstein, Nov 02 09
This quiz investigates the other roles that the "ER" cast has had over the years, primarily focusing on the intriguing crossover with "Top Gun" (1986).
Tough
abechstein
1299 plays
79.

Librarians Gone Mild; TV and Movie Images 10 questions
Tough, 10 Qns, LaLaLoopy, Jul 02 12
Let's face it: librarians do not have the best public image. As a librarian, I've dealt with this for years, but do we get a break on film? Judge for yourself.
Tough
LaLaLoopy
1272 plays
80.

Breaking The Fourth Wall 10 questions
Average, 10 Qns, pennie1478, Jul 31 13
A quiz about movies and TV shows that have directed questions, information, or a look at the viewing audience.
Average
pennie1478
552 plays
85.

Ape About Comedy 10 questions
Average, 10 Qns, zorlock7, May 15 18
Here's a look at situation comedy TV shows and movies. Some of them involve the comic book characters Blondie and Dagwood.
Average
zorlock7
May 15 18
273 plays
86.

Not Furious, But Furry 10 questions
Tough, 10 Qns, ClaudiaCat, Dec 12 20
A selection of movies and cartoons that relate to 'furry' in some way.
Tough
ClaudiaCat

Film & TV for Old and Young (2) 10 questions
Tough, 10 Qns, EnglishJedi, Nov 09 18
A mix of film and TV trivia from across the decades and both sides of the Atlantic.
Tough
EnglishJedi

Playing the President Part 4 10 questions
Very Difficult, 10 Qns, evenlater, Jun 15 07
This quiz tests your knowledge on actors who have played U.S. Presidents #1 - 11 (Washington to Polk). This is the fourth and final installment in my "Playing the President" series, which covers TV and movie portrayals of each of the first 42 presidents.
Very Difficult
evenlater
1599 plays
89.

This film was made in 1988 and was one of the funniest comedies to come out in the eighties. Eddie Murphy plays Prince Akeem, his best friend Semi is played by Arsenio Hall. The film is about the Crown Prince of Zamunda who wants to pick a wife of his own choice and arrives in America with plans to seek his bride in the Queens district of New York City. - From quiz: TV & Film Comedies I
The Sound of Music.

"Doe, a deer, a female deer, Ray a drop..." This is like the sweetest movie of all time. "Mary Poppins", I'm sorry, Julie Andrews was at her best in the raggy old clothes. What I can't understand. They spend many moments with Julie in the hand me downs and the kids are wearing curtains. But then you put Julie in this absolutely beautiful wedding gown for 2 seconds. Must be a movie, huh?
If you ever get to Salzburg, Austria, make sure you check out the gardens. Absolutely breathtaking view from the top of a fort in the city. You can look down to see where the movie was filmed along the water. Just beautiful! - From quiz: Ahhh, Ewww, Ehhh, Ohhh The Sounds of Entertainment
John Forsythe.

Forsythe voiced the character of Charlie Townsend in the hit show that ran from 1976 - 1981. The show was eventually rated the number one show on TV. - From quiz: Seldom Scene In Movies Or TV
Carry On Sergeant.

This film was made in 1958 and was the first in a long history of 'Carry On' films between 1958-1992 there were 31 in total. In this film Sergeant Grimshaw wants to retire in the flush of success by winning the star squad prize with his very last platoon of newly called up National Servicemen. In the tradition of 'Carry On' films what a motley bunch they turn out to be. William Hartnell plays Sergeant Grimshaw, and other usual 'Carry On' cast member were Charles Hawtrey, Kenneth Williams, Kenneth Connor and Hattie Jacques. - From quiz: TV and Film Comedies II
Theodopolus.

In this series, Lieutenant Kojak was a New York City police officer who was tough on crime. The character was played by actor Telly Savalas. In this case, the character and the actor shared a Greek heritage, hence the character's first name. He was often seen sucking on lollipops in the show. Savalas developed this habit when he was trying to cut down on smoking cigarettes. It was written into the show in Season One and stayed with the character throughout the series. - From quiz: Characters With Single Names
It is never revealed.

Jack Klugman played Dr. Quincy on this television show. Dr. Quincy's name is never revealed over the duration of the show's run from October 1976, to May 1983. However, intrepid viewers would have seen a few instances when his first initial was revealed. In one episode, his name appears as "R. Quincy" on a business card. On other early shows, his office door is shown with "Dr. R. Quincy" on it. So, whatever it was, it couldn't have been one of the alternatives given in this question. - From quiz: Characters With Single Names
Bruce Almighty.

This film was made in 2003 and is a very funny comedy. Jim Carrey plays Bruce Nolan, Morgan Freeman plays God and Jennifer Aniston plays Grace Connelly, girlfriend of Bruce Nolan. The plot outline is a guy who complains about God too often is given the almighty powers to teach him how difficult it is to run the world. - From quiz: TV & Film Comedies I
This is category 6653
Last Updated Aug 28 2021 7:04 PM