Humans share Plant Earth with several other species, some of which eat human flesh. Which of these beasts that prey on people can you identify?

Quiz Answer Key and Fun Facts
1. All six subspecies of this striped cat are considered endangered. What is this animal that has been responsible for more human deaths by direct attack than any other wild mammal?

Tigers have killed, and usually dined on, an estimated 373,000 humans between 1800 and 2009. The deadliest single tiger is known as "The Champawat Tigress". After being shot and wounded, she was unable to hunt her usual prey and began hunting humans. She killed 436 Nepalese people from about 1890 until 1911, when she was shot and killed.
2. This threatened reptile is found on several islands in Indonesia and dominates the areas in which it lives. Up to ten feet long and weighing up to 150 pounds, what is this carnivore?

Komodo dragons, who can eat up to 80% of their body weight, are the only lizards known to sometimes attack and consume humans. Although such attacks are rare, they often result in death and at least partial consumption. Those who are attacked and manage to get away are usually terribly wounded. Details of the most infamous Komodo dragon attacks from 2003 to 2013 include an eight-year-old boy, a group of SCUBA divers, a man picking apples, and a guide at Komodo National Park in Indonesia.
3. This predator is similar to but smaller than a jaguar. It is considered "near threatened" because of habitat loss and illegal hunting. Can you spot this beautiful cat that is an expert at climbing trees?

More recently, a leopard in Nepal is thought to have killed 15 people in 15 months in 2012 and another in Badeth Village, India, has killed at least 12 humans between 2012 and 2014.
4. This predator has over 560 species, only four of which have been involved in a significant number of fatal attacks on humans. Among the species not so involved are nurse, basking, and mako. What is this underwater menace?

The shark species most dangerous to humans are the great white, tiger, bull, and oceanic whitetip. Between 1580 and 2014, confirmed shark attacks on humans totaled 2,899, with 548 fatalities. In 1916, a series of shark attacks took place along the New Jersey coast.

The victims included a young man swimming in shallow water, another man swimming away from shore, an eleven-year-old boy and a man who dove in to try to save him, and another boy who, seriously wounded, was the only victim to survive. Shortly after, a great white shark was taken that had human remains in its stomach.

These attacks led to Peter Benchley's novel, "Jaws", which was the source for the blockbuster Steven Spielberg film.
5. This voracious predator is a very large reptile. It has some 14 species, all of which live in tropical or semi-tropical habitats, are carnivorous, and are semi-aquatic. A few species seem to enjoy dining on humans, particularly along the Nile River. What beast is this?

The Nile crocodile in sub-Saharan Africa is noted for its trait of dining on human flesh. The most notorious Nile crocodile was still alive on December 1, 2015, after killing over 300 people. Named "Gustave", this monster is over six meters long and weighs around one ton.

He is said to be over 60 years old, and he is rumored to kill not only for food but for fun. He disappears for weeks or months, and then appears again. He has resisted many attempts to kill or capture him. Other species of danger to humans include the saltwater crocodile, found in Northern Australia and Southeast Asia, and the American crocodile, located in the Caribbean area.
6. This animal lives generally in India, Sri Lanka, and Nepal. It is usually not thought of as a killer and eater of humans because its normal diet consists primarily of fruits, ants, termites, and beetles. It will eat carrion if other food is short. Weighing between 150 and 400 pounds, and 4.6-6.2 feet long with almost completely black fur, what is this creature?

The sloth bear is quite capable of killing humans and has killed and eaten them. The most horrific example is "The Sloth Bear Of Mysore" that, in 1957, killed twelve people (partly eating most of them) and injured dozens more. More recently, in 2014 a Sloth Bear killed and partly ate a farmer in India, and seriously wounded another.
7. This large feline predator is a bold hunter of humans both during the day and at night. All were born free. What animal is this?

Lions will enter villages at any time to find and steal human prey. In the 21st century, approximately 700 people have been attacked by lions each year. The deadliest attacks by human flesh eating lions are known as "The Lions Of Njombe." In Tanzania in 1932, a pride of 15 lions killed between 1500 and 2000 people. "The Tsavo Lions of Kenya" killed as many as 135 railroad construction workers in 1898.
8. This animal has eight species, including one called "sloth." Several other species are also dangerous to humans. What ursine creature is this?

Most attacks on humans by black, brown, and grizzly bears are defensive. The bears were surprised by human intruders, particularly female bears with cubs, and responded in an often deadly manner. At times, the bears did consume part of the humans. The only bear that stalks humans for food is the polar bear, which can grow to 1500 pounds. One particularly deadly brown bear in Japan was known as "Kesagake." When he was raiding the corn harvest near Hokkaido, he was shot by farmers. Over a week later, he returned killing a baby and dragging its mother away.

Her head and legs were found later. Then he broke into a home and killed four people, escaping into the forest. Eventually, he was tracked down and killed, but his stomach contents left no doubt that he had feasted on human flesh.
9. No individual one of this flesh-eating fish, found in such rivers in South America as the Amazon, could possibly kill or eat a human. But a school of them can easily do so. What is this creature with sharp teeth, powerful jaws, and an insatiable appetite for meat?

Piranha are reputed to be able to eat a human to the bone in less than a minute and to consume anyone falling into the Amazon River. Such stories are a bit exaggerated. However, in the past few years, there have been some deadly attacks. In 2011, an 18-year-old man was killed in Bolivia, and in 2012, a five-year-old girl was consumed in Brazil.

In other attacks: in 2011 in Piaui, 100 people were injured; in Argentina, ten people were savaged in December, 2013, a month after 70 others were attacked in the same place; and in 2015, a six-year-old girl was killed and partially eaten after the canoe she was in capsized in Brazil.
10. This creature is a large predatory beast living in the waters in the eastern Pacific Ocean from Tierra del Fuego to California, and is spreading into waters off Oregon, Washington, British Columbia, and Alaska. What is this carnivorous invertebrate that primarily eats small fish, cephalopods, and crustaceans?

Humboldt squid can grow to over six feet in mantle length and weight up to 100 pounds. They move in large groups of up to 1200, swimming at speeds nearly 15 miles per hour. They use their tentacles (100-200 suckers with sharp teeth) to pull victims to their large sharp beaks.

They have become increasingly deadly to humans. In 2009, they began to attack swimmers and divers along the coastline in California. In 2010, they capsized a fishing boat off Mexico and killed and partly consumed seven men. And in 2014, they ate 22 Mexican drug smugglers alive after their boat sunk off California.
Source: Author lowtechmaster 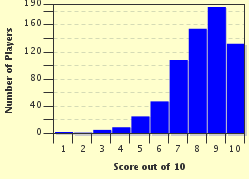 Related Quizzes
This quiz is part of series An Animal Mix:


1. A Day At The Zoo Average
2. Animals of the Amazon Jungle and Beyond Easier
3. A Menagerie Of Real Animals Average
4. Animals That Eat Humans Easier
5. A Zoo Without Vwls. Easier