We are all familiar with the double shelled molluscs in one form or another. Here are some general bivalve minutiae, some better known and some more obscure.

Quiz Answer Key and Fun Facts
1. Which of these molluscs is not a bivalve?

The limpet is a single shelled mollusc which clings to surfaces with its foot for most of its life. The others are both familiar at the seaside and restaurant. A mussel and a muscle are not named coincidentally, as both mean they are shaped like a mouse.
2. What is the usual method of locomotion for a bivalve?


Answer: All of these depending on the species

Some bivalves can swim at an impressive rate, such as the razor clam, which uses its foot to swim, and the scallop, which flexes its valves rapidly, ejecting water around the hinge to propel itself through the water. Many also use their foot to burrow into the sand. Some are static and attach themselves to surfaces, including some oysters and mussels.
3. Where would you find a bivalve's lamellibranch?

Bivalves have four types of gills among them, which are called photobranch, filibranch, septibranch and lamellibranch, which describe their structures. Lamellibranch gills are translated as 'plate-like'.
4. Only bivalves can produce pearls.

Although good quality pearls are produced by bivalves, especially oysters and mussels, nearly all shelled molluscs have the capability to produce nacre, the constituent of pearls. It is composed of calcium carbonate and a protein called conchiolin. But pearls from other molluscs rarely have a good lustre so are not used for jewellery.
5. What is the commonest cause of pearl formation?

In fact it is parasites, especially worms, that are the usual cause of pearl formation, rather than the commonly thought sand. Nacre is secreted to cover and isolate the parasite, rendering it harmless to its host. Mammals can also calcify foreign objects that get caught within their bodies.
6. Although snails live in many habitats, bivalves only live in water.

Unlike snails which have evolved to live both in water and on land, the closest bivalves get to terrestrial life is if they are buried in the sand and the tide goes out. But there is enough moisture there to keep them happy until the tide comes in again. Many of course get stranded on the beach by a wave, but they will not survive very long without being swept back into the water.
7. What is the commonest form of bivalve reproduction?

Although some are hermaphrodite, most bivalve species have males and females and reproduce sexually. Oysters switch sexes during their lives, usually starting as males and ending as females. None produce asexually by budding like some lower forms of aquatic life. Bivalves have life cycles with immature stages before the adult emerges. Marine species usually have two, the first is called a trochophore, followed by a veliger. Freshwater bivalves usually have one, called a glochidium, which attaches to any static object to stop it being swept downstream.

They often attach to fish, becoming a dangerous parasite when they do.
8. What do all bivalves lack that are found in snails?

Snails have two pairs of antennae, with their eyes on the longer ones.
Bivalves have a wide variety of eye types, some with only light sensitive areas, whereas others such as Cardiidae and Pectinidae have complex eyes complete with a lens and retina. Scallops have a row of basic blue eyes around their mantle. But none have antennae of any type.
9. What is the usual method of bivalve feeding?

Unlike all other molluscs, bivalves lack a radula, which is a toothed ribbon of chitin unique to molluscs which is used in a similar way to teeth. Therefore they are passive feeders, allowing organisms to filter through their siphons which are then caught in their gills.

They then pass along cilia to the stomach and digestive system beyond. The gills are also used to collect oxygen. The types who bury themselves in sand poke their siphon out of it to collect their food.
10. Which body part is lacking in a bivalve that is found in all other molluscs?

Due to their more passive existence compared to many other molluscs, bivalves did not develop a brain but rely solely on neural ganglia for similar functions. They do however have a perfectly adequate digestive system requiring an anus, and some do have eyes with both lenses and retinas, as well as more basic types. Tentacles are present in most species as with many other aquatic molluscs.
Source: Author satguru 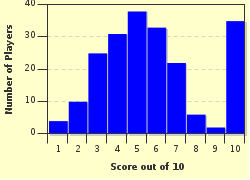 
Other Destinations
Explore Other Quizzes by satguru