Humans have long been entranced by the Giant Pacific octopus, the largest species of octopus in the world! Come learn about these fascinating, intelligent animals.

Quiz Answer Key and Fun Facts
1. The giant Pacific octopus is a top predator, feeding on bivalves, crustaceans, mollusks and fish. Part of its extraordinary hunting ability comes from the suckers on the arms. What sense do the suckers use to help the octopus hunt?

A mature female giant Pacific octopus has 280 suckers on each arm. Not only do they have chemoreceptors for tasting and smelling, but the internal structure has been described as a "Chinese finger trap": the harder you pull, the harder it is to get away!
2. The third right arm of a male octopus has a special tip, called the ligula. What function does the ligula serve?


Answer: It presents a spermatophore to the female.

Octopuses do not have sex like mammals do. The male produces spermatophores, sperm packets that look like long white straws. The male uses the ligula to give the spermatophore to the female.

When she has extracted the sperm, she may eat the empty spermatophore for a protein-rich snack! (Take that, PowerBar.)
3. In 2009, an American woman was in the news for giving birth to octuplets, bringing her total number of children to 14. The tabloids dubbed her "Octomom." How many times can real octo-moms reproduce?


Answer: Once in their lives.

The giant Pacific octopus is semelparous, meaning that it reproduces once. Males usually go senescent a few weeks after they mate (meaning that they stop eating, their intelligence deteriorates, and they soon die). Females lay eggs, care for the eggs, and die about the time their eggs hatch.

We humans are iteroparous, meaning that we can reproduce repeatedly. Someone should have told the tabloids that "Octomom" is not a biologically accurate nickname.
4. Octopuses are in the class Cephalopoda, meaning head-foot. (I think you can guess why.) What group of animals would you be most likely to see at an octopus family reunion?

Octopuses, like the marine snails, are molluscs. Molluscs are all invertebrates (no spine). They both have a special raspy tongue called a radula and similar internal organs. The snail's large, muscular foot and the octopus' arms are evolved from the same ancestor.

Sea stars are also invertebrates, but they belong to the echinoderm phylum. Swordfish and snakes are vertebrates (animals with spines), so they are not closely related to the octopus.
5. At birth, the giant Pacific octopus is considered plankton.

When a giant Pacific octopus hatches, it doesn't deserve to be called a giant! The hatchlings are about the size of a grain of rice, and float at the mercy of tides and currents. This is why we call octopuses "meroplankton," organisms that are "merely" plankton for part of their lives.

As the Giant Pacific octopuses get bigger, they will graduate to a benthic existence (on the sea bed).
6. When an octopus wants to, it can change color almost instantly! What are their color-changing skin cells called?

Chromatophores, meaning "color carriers," are an octopus' secret weapon! They can use them to camouflage themselves so they can hide or sneak up on food. They can use them to communicate with other octopuses, too.
7. If you dissected a giant Pacific octopus, what body part might you think came from another animal?


Octopus tongues are raspy radulas, not at all like a snake's tongue.
The eyeballs have slit pupils, not like a human round pupil.
Octopuses do not have gallbladders, because they are invertebrates.
8. Octopuses are often considered the smartest invertebrates. What have we seen octopuses in captivity do?


Answer: All of these!

Octopuses are never boring in captivity! An octopus in California was in the news in 2009 for pulling on a valve and flooding the Santa Monica Pier Aquarium.

A Giant Pacific Octopus at the Seattle Aquarium learned how to recognize and squirt the biologist who woke it up at night to check on it. The Seattle Aquarium also had an octopus who went roaming out of its own tank and into other tanks with tastier occupants!

They can also run mazes and open child-proof pill bottles. Impressive!
9. If you are diving, how can you tell where a giant Pacific octopus lives?


Answer: The den area is surrounded by shells and carapaces.

Giant Pacific octopuses "take out the trash," meaning that they dump the shells of the animals they eat just outside of their den.

Dens can be any octopus-sized crevice-- even man-made objects like flowerpots. Giant Pacific octopuses will live in a den for several months and then move.
10. What is the best reason not to bother a giant Pacific Octopus in the wild?


Answer: Its bite would be unpleasant.

A giant Pacific octopus has glands in its mouth that can paralyze smaller animals like crabs and break down connective tissue. It wouldn't kill you, but it wouldn't be fun.

Unfortunately, we don't have enough data on the Giant Pacific octopus populations to say if they are endangered or not, so it is not on the protected species list.

I hope you enjoyed your time with the giant Pacific octopus!
Source: Author Possible1234 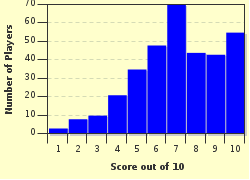 
Other Destinations
Explore Other Quizzes by Possible1234