Here are ten questions dealing the vision and eyeballs of a variety of animals. Some of these facts may surprise you and many you may already know. Let's 'see' how much you actually know!

Quiz Answer Key and Fun Facts
1. Birds of prey are known to have which type of vision?

Birds of prey such as the eagle and falcon, use what is known as binocular vision. This type of vision provides the animal with stereopsis, which allows them to perceive depth. Stereopsis occurs when two eyes perceive the same object from slightly different angles. Because of this slight difference of angle, the ability to perceive both depth and distance is enhanced.
2. Which of the following colors are dogs least likely to be able to perceive?

It is a common misconception that all dogs are colorblind. Although they see a different spectrum of colors than humans can, they do have the ability to perceive colors. Because dogs only have two different types of color-sensing cells in their eyes, they are unable to perceive as many different colors as humans are. Dogs are able to see yellow, blue and gray tones.
3. Why are goldfish so sensitive to changes in light?


Answer: They have no eyelids.

The common goldfish can see the same spectrum of colors that humans can, as well as seeing ultraviolet light. They have surprisingly good vision and are able to recognize the person who feeds them. Because goldfish have no eyelids they are very sensitive to changes in light, especially the change from darkness into brightness.
4. What is the name of the reflective cells found in cats' eyes, that amplify incoming light?

Feline eyes contain larger amounts of tapetum, which are reflective cells that amplify incoming light as well as giving cats eyes that glowing appearance when viewed at night. Cats' eyes are designed for hunting and their oval-shaped pupils can widen and narrow very quickly enabling cats to adapt their eyes to changing light much quicker than can humans.

These, and other adaptations also allow a cat to require only one sixth the light that a human needs to see in the dark.
5. Ocean dolphins have the ability to do which one of the following things with their eyes?

Dolphins have the ability to move each of their eyes independently from the other. This gives them the ability to see two differing images at the very same time. Their eyes can also see as well underwater as the can when above water. Even when sleeping, dolphins always have one of these eyes open, scouring the area for possible predators.
6. An ostrich's eyeball is larger than its brain.

This interesting fact is true. Each one of the ostrich's eyes is approximately the size of a billiard ball. Their eyes are bigger than their brains, and are the largest eyes of any other land animal. These large eyes provide them with excellent daytime vision and helps them avoid predators.
7. Which animal has the largest eyeball in the ocean world?

The extremely rare colossal squid is known to have eyeballs that are thought to be 12-16 in. (30-40 cm) across. These large eyes would be needed for seeing in the extreme darkness of the abyssal sea. But, as these animals are very rare, and little is known about them, the information about their visual acuity is a matter of debate between marine biologists around the world.
8. Which of the following animals have corneas so similar to humans that they are sometimes used as human transplants?

The cornea of an eye is the clear covering over the eyeball and could be compared to the crystal face on a watch. Sharks have corneas so similar to human corneas that they are used in human transplants. In the 1960s it was found that sharks have duplex retinas containing both rod and cone cells.

This attribute allows the shark to detect color, although it is poorly understood how the shark interprets colors.
9. Which of the following statements about an owl's eyes IS true?


Answer: They have three sets of eyelids.

Owls have some of the most unusual eyes in the animal kingdom. They are thought to be the only bird which is able to perceive the color blue. Owls are unable to move their eyeball which accounts for their ability to move their heads almost all the way around as well as upside down.

They are able to see moving prey from more than 150 ft. (45m) in the daylight hours. The owl's eyes are not actually 'eyeballs', but rather, are elongated vision tubes. They are held in place by structures known as Sclerotic rings.

It is these rings, which attach the eye to the skull, that prevents movement. Owls also have three types of eyelids!
10. Horses have a two blind spots: one in front of them and one in the rear.

Because the eyes on horses and other equines point sideways, they have great peripheral vision. It leaves them with a blind spot directly in front of them and well as one in the rear, which is why you have always been told not to come up to a horse from behind.
Source: Author dcpddc478 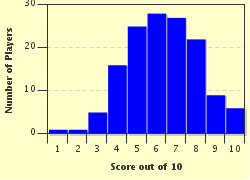 Related Quizzes
This quiz is part of series More Critters of TheWorld:

Some more animal quizzes from my list of quizzes.