Ten interesting animal facts for you to ponder. Have fun.

Quiz Answer Key and Fun Facts
1. Barbary macaque males are noted for which unusual behaviour, unlike almost every other male monkey in the world?


Answer: They take a very active part in rearing the infants

The Barbary macaque is one of the Old World monkeys, and can be found in parts of Algeria, Morocco, Libya and Gibraltar. It is a light coloured creature with a dark pink face and the remains of what was once a long tail. The main diet of this little creature is leaves, flowers, seeds, fruit, earthworms, bugs and spiders, and the occasional tadpole. Must have French blood. Unusually, the males take a very active part in the rearing of infants, playing with them, grooming them constantly, and carrying them around for hours at a time.

This leads to the forming of exceptionally strong bonds between the chaps, so much so that if a solitary fellow doesn't have an infant of his own to care for, his mates will share their infants with him.
2. What is unusual about the clavicles of cats?

Compared to humans, cats have seven cervical vertebrae like most mammals, thirteen thoracic vertebrae (we have twelve), seven lumbars (we have five), three sacral ones (we have two more), and a varying number of caudals in their tail (we have three to five which have become part of the coccyx). Unlike humans however, who have clavicles that attach our upper arms to our sternums, cats have clavicles that are more or less free floating and only attached to their shoulders. This striking difference gives our moggies the ability to squeeze past any tiny space through which their heads can enter.

Other interesting anatomical facts about cats is they have thirty-two muscles in each ear, and a marked difference between their walking and running strides. When walking, they, like camels and giraffes, move the side legs together, rather than diagonally, but when running, they switch to the diagonal stride. Having never noticed that, I've been watching Hagrid for the past two hours to see how he walks, but the big fat lazy creature has just been blinking at me lazily and refusing to move.
3. Ants, and all insects in fact, do not possess an anatomical feature without which we humans would expire. What is that feature?

Instead of lungs, an ant absorbs oxygen and other necessary gases through tiny valves in its body. Neither does it possess a heart as such. Instead of that organ, a long thin tube runs along the top of the ant's body. This circulates necessary fluids about the ant's system with a pumping action similar to a heart.

Other interesting facts about ants include the following: Amazingly, while most other creatures learn by imitating the behaviour of adults, ants develop their skills through interactive teaching in a form of tutor-pupil relationship. Even more amazingly, ants are used in the surgical procedures of some countries to hold the edges of wounds together. After their jaws lock into place on both side of a wound, the ant's body is then cut off, with the head and jaws remaining clasped on the wound. Some ants produce a venom which can also be used medically. Roughly speaking, for every human on earth, there are one million ants. This is fortunate - but not for the ants - for in some nations, ants are consumed by people. In Mexico, for example, they are eaten as escamoles, and are said to have a taste that is a combination of butter, nuts and cheese. In India, Thailand and Burma, they are made into a paste and served with curries and salads. Australian aborigines mash them up in water, giving a lemon squash flavour to the drink. Squash for squash. And so on. I'll just have a dry cracker and milk, thank you.
4. Horses cannot vomit.

Horses are herbivores with a diet consisting of various plant materials which they graze at constantly all day long. In spite of this they have rather small stomachs, but, unlike cows, they only have one each. This has adapted to be able to digest grasses. Unlike humans, horses cannot vomit due to the strength of the valve at the lower end of their oesophagus. If a horse appears to be trying to vomit, it is a sign of a serious internal problem.

The height of a horse is measured from an area known as the withers, where the neck meets the body. This mighty animal, in spite of its size, lacks a collarbone entirely. Its limbs are attached to its spine by very powerful muscles, ligaments and tendons. A horse has the largest eyes of the land mammals and excellent vision, both day and night. It has a very strong sense of smell and excellent hearing as well. Noise can have a bad effect on the health of a horse, causing stress and nervousness.
5. When it is time to select a suitable mate for breeding purposes, what model like behaviour does the male penguin display?


Answer: He strikes up masculines poses

Penguins usually congregate in large colonies. In extremely cold weather, they huddle together, and keep changing position so that each penguin has a turn in the warm centre of the pack. Because of their style of colony living, this has led to the development of their social interaction skills and their visual and vocal behaviours. If a mother penguin is bereft of her baby, for example, she will attempt to steal the baby of another female, but this is met by fierce resistance not only from the defending mother, but her female "friends" as well.

In breeding season in particular, while seeking for a suitable mate, male penguins promenade in front of the ladies, each one displaying himself to the best of his ability, either by louder than normal vocalisations, or by striking up masculine poses and holding them for several minutes at a time until he is noticed by the girls.
6. How does the artistic agile gibbon defend its territory?

The agile gibbon, an old world ape and therefore tailless, can be found in the rainforests of southeast Asia. Also known as the black-handed gibbon, it is noted for its dark fur topped by very white eyebrows. In addition to those eyebrows which both sexes possess, the male agile gibbon also has white sideburns as well.

These little animals mate for life, and in a striking difference to most other creatures, defend their territory, not by visual and verbal threats, but by singing melodiously instead. How lovely is that?
7. What sometimes happen to pelican chicks after feeding?


Answer: They have a seizure and become unconscious

Pelicans are large birds related to ibises, spoonbills and herons. They come in various colours, with the white one perhaps the loveliest, but altogether they look like badly designed swans. In flight they are a glorious sight, but up close just a little bit alarming. Those long beaks are awfully sharp. During breeding season, the males thrust at each other with their bills, like swordsmen fighting over demure ladies. Colonies of chicks are extremely noisy, but the adult pelicans, as a rule, are usually rather silent. The male bird tends to grunt at the chicks occasionally ("Do I have to come over there and clip you under the beaks, you lot? Settle down!") and also after he's finished mating. I can't think why I'm reminded of my husband right now.

One peculiar feature of the chicks which has scientists puzzled is related to their feeding practices. From the time they're a week old, they have the ability to put their beaks into the pouch of the parents and feed themselves. Now and then after being fed however, the chicks can have a type of seizure and fall unconscious for several minutes. This of course occasionally also happens to my children after enduring a session of my cooking.
8. Is it true that hippos spin their tails around very rapidly like a rudder when defecating?

Apart from feeding, hippos spend most of their lives in water. That includes mating, fighting and giving birth. During the mating endurance trial, the poor female spends most of that time under water, only emerging now and then to draw breath. "Periscope up!" The baby hippo, born underwater as well, must learn to swim to the surface immediately for air, or die. Amazingly, the little hippo has to dive under water to suckle from its mother as well.

The hippo is a very aggressive animal and is considered one of the most dangerous animals in Africa. The female is at her most aggressive when defending her young, but the male is bad-tempered all the time. Hippos congregate in a pod, but not as mating pairs. Instead, the bachelor males hang out in one spot, and the females in another. That's astonishingly like an Australian party. The women are usually at one end of the room, while the fellows are down at the other end where the keg is kept.

When defecating, hippos spin their tails around like fans. The reason for this is to flick the excrement over as wide an area as possible in a form of territorial marking. Moral of the story: Never stand behind a hippo doing a whoopsie.
9. When a sloth dies, its body is often found in what condition?


Answer: Upside down still attached to a branch by its claws

Sloths move so slowly that various insects, fungi and algae are able to set up residence in their fur. Native to South America, sloths spend much of the time in trees, only descending to ground level approximately once a week to defecate and urinate. When in trees, they tend to spend much of their time hanging upside down.

Their claws have been especially adapted for this purpose and latch strongly onto tree branches, so much so that if a sloth dies (how can they tell?), its body will often remain upside down at the spot where it died, fixed to the branch to which it was last clinging, like a decomposing tombstone.
10. During the breeding season of humpback whales, males line up in a row behind an available female, and battle each other for the right to the lady. Which artistic feature is part of these battles?

The hopeful male humpbacks following the female form into groups. A member from one group will then battle a member from the opposing side, one at a time, in a form of round robin competition until an ultimate victor emerges. Meanwhile, the demure damsel swims seductively on, completely ignoring all the fuss, tail swishing alluringly. Wikipedia tells us that that these battles include an exhausting array of "breaching, spy-hopping, lob-tailing, tail-slapping, fin slapping, peduncle throws, charging, parrying", bellowing melodiously at one another, grunting, groaning, snorting, "thwops and barks". My goodness me, it's a wonder they have any strength left to perform the job in hand, but one presumes when they do, that they have one whale of a time.
Source: Author Creedy 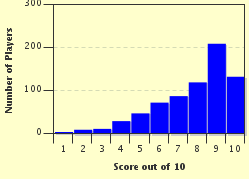