These are various interesting facts about wild animals that I learned when playing the game "Zoo Tycoon 2." There they have a zoo encyclopedia with fun facts about each of the animals. I hope you enjoy the quiz!

Flamingos turn pink from eating large amounts of shrimp and plankton which is what there diet largely consists of.
2. Which of the following is NOT included in a giant panda's diet in the wild?

Giant pandas primarily spend 12-14 hours eating daily and are in danger of becoming extinct. Although well over 90% of their diet is bamboo, they do eat a few other items. There are only approximately 1,600 giant pandas left in the wild.
3. Gorillas build a new sleeping nest every night.

Gorillas are actually known to build a new nest each night. Another interesting fact is that a baby gorilla develops his/her physical skills almost twice as fast as a human baby.
4. Polar bears cover their noses with their paws when hunting.

This is a widespread myth that many people have believed. Scientists have spent years monitoring polar bear habits and have realized that polar bears do not in fact cover their noses with their paws.
5. Beavers are sometimes dropped by parachute into remote areas to build dams.

This is helpful for our biomes because not only do they build dams, but they also help reduce erosion in our rivers. Beavers are excellent swimmers and can stay underwater for up to 15 minutes because they are able to store large amounts of oxygen in their body tissue and lungs.
6. Which of the following animals is able to dive the farthest?

Chimpanzees are not usually able to swim. Hippos actually learn to swim before they learn to walk and moose can actually dive to 18 feet and stay underwater for 30 seconds. Bengal tigers are also able to swim even though they weigh 400-570 lbs.
8. What color eyes do all tigers have with the exception of the white tiger?

All tigers have yellow eyes except for the white tiger who has blue eyes. An interesting fact about the Bengal tiger is that its roar can be heard up to two miles away!
9. All females in a lion's pride are almost always related.

This is true. The females can be mothers, daughters, sisters, cousins, aunts, or grandmothers. A pride consists of 4 to 40 lions including 3-15 lionesses, their offspring, and a couple of males who fought their way to the top.
10. Zebras are easily trained to ride on.

Unlike the movie "Racing Stripes", zebras are very difficult to ride but can be tamed and trained to pull carriages. Zebras can become easily aggressive and unpredictable. Also, saddles are very hard to place on their distinctive body shape.
11. When zebras lower their ears, they are indicating that they are about to kick.

Another distinctive characteristic of zebras is that when they snort, they are frightened.
12. Which biome does the giant panda primarily live in?

Giant pandas primarily live in the bamboo forests of China causing bamboo to fill up 98% of their diets.
13. Which animal is known to eat with its head upside down?

Flamingos' erectile tissue helps enable them to eat in this peculiar fashion. Flamingos have legs that bend backwards!
14. What is a group of flamingos called?

Flamingo is actually the Latin word for flame and in ancient Rome, flamingo tongues were actually considered a delicacy.
15. Which of the following are NOT true: The American crocodile

The American crocodile is only known to live up to around 50 years old. Crocodiles also swallow stones to aid in digestion and to control buoyancy in the water.
Source: Author summerland1991 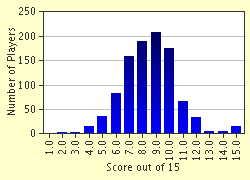 
Other Destinations
Explore Other Quizzes by summerland1991