This quiz is here to separate the men from the beasts. Can you distinguish fact from fiction? This is a ten question true/false quiz in which you will say if the information about an animal is true or just a tantalizing piece of my imagination.

Capybaras are the world's largest rodent. The capybara's semi-webbed feet make it a good swimmer.
2. No two zebra stripes are alike. Are some zebras born with brown stripes?

Even though some zebras are born with brown stripes, they darken to black as they get older.
3. A house mouse is the world's smallest mammal.

The world's smallest mammal is the bumblebee bat of Thailand. Another neat thing about bats is that they are the only mammal that can truly fly. With wing beats that can reach up to 20 per second, they have to use sonar to avoid obstacles at night.
4. Dolphins can shut down half of their brains at a time.

Dolphins are mammals that have to think to breathe. So when they are asleep, they only allow half of their brain to shut down. They kind of float toward the surface while sleeping; all the while keeping one eye open. http://whale.wheelock.edu/whalenet-stuff/sleeppage/
5. Jellyfish are named after jelly, which makes up 95 percent of their bodies.

Jellyfish are made of 95 percent water.
6. Fish are the only animals that can't communicate with one another.

Not only do fish communicate with one another but it's almost an art form. Some fish use the backs of their throats and some have even been known to use their swim bladders to communicate.
7. Crocodiles' digestive juices are so strong that they can digest steel nails.

A crocodile's stomach holds so much acid that it can even digest a spear head.
8. Garden snails have both male and female organs.

They are hermaphrodites.
9. A rhinoceros's horn is made up of the same thing that makes up human hair.

They are both made of the substance keratin. This substance can be found in our hair and in our fingernails.
10. Vampire bats really live off blood.

Vampire bats have fewer teeth then other bats. They don't need as many teeth, since they live off the blood of mammals.
Source: Author wryters 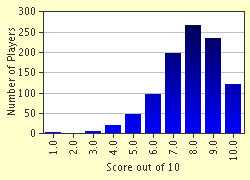 
Other Destinations
Explore Other Quizzes by wryters