Interesting Animal Facts Quiz Challenge - How Much Do You Know? | Mixed Animal Trivia

Can you discern the correct answer for various animal facts?

Share on Facebook
Share on Twitter
Share by E-Mail
Author
debodun
Time
5 mins
Type
Multiple Choice
Quiz #
338,305
Updated
Dec 03 21
# Qns
10
Difficulty
Difficult
Avg Score
4 / 10
Plays
1452
This quiz has 2 formats: you can play it as a or as shown below.
Scroll down to the bottom for the answer key.

Quiz Answer Key and Fun Facts
1. What animal has full-range spectrum vision (can see in the infra-red, visible and ultra-violet ranges)?

Biolgists believe that goldfish developed full-spectrum vision so that they can avoid predators by seeing flashes of static electrical charge and bio-luminescence that appear when other aquatic creatures are hunting. This is also handy when they are hunting for food and lets them sense the swimming movements of small organisms.
2. In Africa, which of these mammals has killed the most humans?

The average hippo weighs 4000 pounds (1800 kilos) and, surprisingly, can run up to 18 MPH (29 m/hr), faster than most humans can run. Being extremely aggressive, territorial and protective of their young, humans can place themselves in danger from hippos without even being aware of it until it's too late. It is estimated that hippos kill an average of 300 people a year.
3. What is a group of cockroaches called?

Horses, rhinoceroses, and tapirs are in the family of Perissodactyla (mammals with feet that are symmetrical from a central third toe). Rhinos and horses do share other similar genetic traits, making them much more closely related than to the other named animal species listed here.
5. Which of these common farm mammals has the longest gestation period?

The average gestation for the horse is 337 days. Next is the cow at 280 days. The goat gestates for an average of 151 days and the pig is 113 days.
6. Planting what commonly cultivated plant around the edge of your garden may help protect it from nibbling rabbits?

"The Old Farmer's Almanac" says that rabbits hate the smell of onions. Planting a fence of onions will help deter rabbits from entering. However, don't leave any licorice laying about; it seems rabbits are attracted to this confection.
7. Of these particular animals, which has the longest average life span?

An American alligator lives an average of 56 years. For a lion, it's 35 years. Rattlesnakes, on average, live 22 years. The koala, surprisingly, only lives an average of 8 years.
8. Besides white and brown, what other natural color can chicken egg shells be?

Although white and brown eggs are the most common, the Aracuana, a breed of chicken developed in Chile, can lay eggs of a blue-green color. This breed has also been crossed with other chicken breeds to produce hens that lay multi-colored eggs. Who needs the Easter Bunny?
9. Mosquitoes are attracted to what color more than any other?

According to Dr. Michael Perich, an entomologist, mosquitoes see best in the blue and ultraviolet spectrum. Therefore they are more attracted to blue lights and clothing and why bug zappers have blue lights.
10. The American robin can carry the West Nile virus?

In America, crows are usually the most implicated as carriers of this disease that humans can contract. However, according to new research by Theodore Andreadis, chief medical entomologist at the Connecticut Agricultural Experiment Station, an analysis of blood samples taken in Connecticut over the past three years found that 40 percent of robins tested positive for WNV while only 1 percent of crows did.
Source: Author debodun

This quiz was reviewed by FunTrivia editor crisw before going online.
Any errors found in FunTrivia content are routinely corrected through our feedback system.
Most Recent Scores
Jan 20 2023 : Guest 47: 6/10
Jan 19 2023 : piet: 10/10 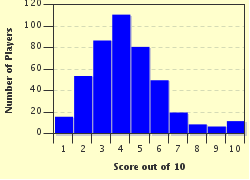