We all know various basic facts about a variety of commonly-known animals. Or do we? Not everything is as it seems... I hope you enjoy this quiz on popular misconceptions about animals.

Quiz Answer Key and Fun Facts
1. "Sloths are lazy. They spend almost 16 hours a day asleep." Er no. This isn't actually true. A 2012 study of wild sloth sleeping patterns showed that, in general, they actually don't sleep for any more than how many hours a day?

A 2012 study by the Max Planck Institute for Ornithology in Germany looked into the sleeping patterns of a variety of different types of sloth. Although it was found that sloths in captivity have been known to sleep for around 16 hours a day, those in the wild only sleep for around 10 hours, spending the rest of their day foraging for food and climbing trees.

This is a fairly new revelation. Indeed, some tribes in central America call these animals "ritto", "rit" and "ridette", most of which mean "sleep", "eat" or "dirty" in native languages.
2. "Lions are the kings of the jungle!" Erm... that's factually incorrect! What, in particular, is so wrong about this statement?

Whilst it is true that lions are at the top of the food chain, and that they are rarely challenged by other animals, lions are actually found in the Savannah, not the jungle.

In Africa, the Savannah grasslands are generally covered with scattered Acacia trees which lions use as shade, whilst the Indian Savannah consists of a mixture of dry forests.
3. "Cockerels crow to signal the sunrise and the sunset". Well this isn't really correct. When do cockerels actually crow?


Answer: At any time of the day

Despite what is portrayed by the media, cockerels do not, as a rule, sit on fences crowing at dawn and dusk. Although cockerels crow to stake a claim to their territory or to ward off predators (e.g. when they feel threatened), this not exclusive, and they can be found crowing throughout the day.

The age at which a cockerel begins to crow varies wildly, but the average age is around four or five months old. Some crow almost constantly, whilst others rarely make a sound - the majority, however, crow regularly throughout the day. Those that do crow often start very early in the morning, when they wake up, creating the myth that cockerels crow to signal the sunrise.
4. "Bats are blind". Well actually, no. They're not. They are, however, nocturnal. What special technique do the majority of bats use to find their way in the dark at night?

Although bats are born blind, they develop good eyesight within their first few days of life. Bats are nocturnal creatures, but they do not possess the special night-vision eyesight that many other nocturnal creatures have. As such, a majority of them (around 70%) use echolocation to find their way.

Echolocation involves the bat emitting a super-high-pitched screech too high to be heard by human ears. Sound travels in waves and, when it hits an object, the waves bounce back to the bat. The closer the object, the stronger the echoed wave.
5. "Owls are very wise birds". Hmmm... but they're not really! Why is this not true?


Answer: Owls have very small brains for their size

Whilst definitely not quite as stupid as the likes of the dodo, owls have rather small brains for their size and, as such, are actually considered by experts to be less intelligent than other common birds such as the goose, the crow or the raven.

The myth about owls being wise is thought to have come from Ancient Greece. Athena, the Ancient Greek goddess of wisdom, was often portrayed with an owl and was believed to have carried one at all times, leading people to think that the owl itself was the symbol of wisdom.
6. "Rabbits only eat carrots!" Absolutely not! They might be willing to eat them sometimes, but too many is very bad for them! What should a healthy pet rabbit's diet consist of?


Answer: Hay, a variety of leafy vegetables and some dried food pellets

The 1934 movie "It Happened One Night" contained a scene where Clark Gable's character talked whilst eating a carrot. The animators that created Bugs Bunny had him say his famous catchphrase "Eh... what's up doc?" whilst chewing on a carrot in a satirical emulation of this scene. Unfortunately, it seems that this created a misconception that all rabbits constantly eat carrots.

A normal rabbit diet consists mainly of hay and green leafy vegetables. In fact, rabbits are more likely to prefer the green leafy top of a carrot than the orange root part. Hay should be the main component of a house rabbit's diet as it provides valuable fibre to aid digestion.
7. "Camels store water in their humps". Oh don't be silly. Of course they don't! What is really in those humps?

How this myth came about is uncertain, but ancient myths told of desert travelers splitting open camels' bellies to drink the water. The misconception was perpetuated in Ancient Rome by Pliny the Elder, who wrote (incorrectly) that camels had two stomachs in their humps - one for food and one for water.
8. "The color red makes bulls angry". What is the main reason that we know this is untrue?

The myth is a result of the red capes that Spanish bullfighters (matadors) use to cause bulls to charge at them for show. Many believe that it is the color of the cape that causes bulls to charge.

However, it is actually the flapping of the cape that causes the bull to charge. In traditional bullfighting, there are three rounds. In the first two rounds, a yellow cape is used and in the third, a red cape. By the time the third round happens, the bull is so stressed and angered by the flapping capes that it charges.
9. "Koala bears" What is wrong with the phrase above?


Answer: Koalas are not bears

Koalas are not from the Ursidae (bear) family of animals. They are, in fact, marsupials (like kangaroos, wallabies and possums), as they carry their young in a pouch. Slightly differently to most marsupials, however, a female koala's pouch opens downwards rather than upwards.

The misconception is thought to have arisen from the fact that the first European settlers in Australia in the eighteenth century named newly discovered animals based on what they looked like to them. As such, some people called koalas "sloths" or "monkey bears" as well as just "bears".
10. Which of the following is a popular animal misconception and is not actually true?

After mating, the male usually protects the female until her shell grows back (in around a week), but the pheromones have worn off by this point and the male lobster then moves on to another mate.
Source: Author suzidunc 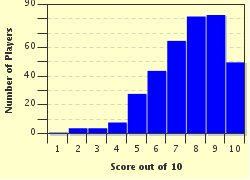