Here is a cool quiz about animal lies and truths.

Elephants drink through their mouths, like all animals.
2. The opossum sleeps hanging upside down by its tail.

The opossum sleeps lying down.
3. The ostrich hides by burying its head...


Answer: it doesn't bury its head

Its best defense is running away. When threatened while sitting on an egg it will flatten its body against the ground. An ostrich fights only when it can't run or hide.
4. Which of these describes how a snake's skin normally feels to the human touch?

When a snake outgrows its old dry skin it peels out of it to shiny new skin. This is called molting, sloughing, shedding or ecdysis and at these times the skin can feel rough.
5. A bear is a true hibernator.

Body functions of most bears slow only slightly in winter. They still get up occasionally and move around, leaving their dens to forage for food. Some bears may not enter a winter sleep at all.
6. Which of these describes all species of bats?


Answer: they are not blind

Some bats, such as the flying foxes, have very good eyesight.
7. Nine-banded armadillos are always born in which numbers?


Answer: four at a time

One reason the armadillo population has grown so fast is that they are always born four at a time (in two sets of identical twins, all male or all female).
8. Between 1970-2000 at least one person was killed by alligators every year in Florida.

Alligators don't normally attack humans unless provoked. Around ten deaths were recorded over this thirty year period.
9. How does the hippopotamus protects its tender skin from the hot sun?

The hippopotamus protects its tender skin from the hot sun by secreting a reddish oil that looks very much like blood.
10. Some turtles have soft shells.

There are soft-shelled turtles whose round, flat bodies are covered with flexible, tough skin.
Source: Author techmom80 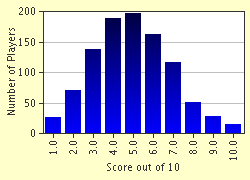 
Other Destinations
Explore Other Quizzes by techmom80