My cat has thumbs. Really, he does. Cats with extra digits on their paws are called Polydactyl, so we named him Ptero, like a Pterodactyl. His brother, who lives with my brother and his wife, is named Digit, because he also has extra digits.

Polydactyls are fairly common in Southwest Britain, America's East coast, and Celtic areas, to name a few. They are also fairly well-known in the US, made famous in part by Hemingway's interest in them. They also used to account for nearly 40% of the Maine Coon breed, before the trait was deliberately bred out of them.
2. Polydactyly is generally a harmful mutation in cats.

The most dominant form of polydactyly is harmless, although there is a less common form that indicates other genetic physiological problems with the cat.
3. Which of these names are polydactyls NOT commonly known as?

Ok, my husband calls our cat a freak, but in a loving way, and it's not a common nickname for the breed.
4. There are cases of polydactyl humans.

There are six-fingered humans.
5. Polydactyly in cats is unique to North American cats.

One of the other names for a polydactyl cat is Cardi-cat, originating from Cardiganshire, in Wales.
6. Polydactyly is less common among cats than other mammals.

Polydactyly is more common in cats than other animals, perhaps because the location of the genes on the chromosomes make them more likely to mutate.
7. Polydactyly, in its more common and non-harmful manifestation, is a dominant trait.

This explanation refers to the most prevalent, and harmless, form of polydactylism.

Since it only takes one gene selecting for polydactyly to give a cat extra toes, the polydactyl gene is dominant over the "normal-footed" gene.
8. What are the most common minor problems associated with polydactyls?

My polydactyl, Ptero (as in ptero-dactyl, heehee), has some issues with two of his claws. The toes that would normally be the innermost toes, on the sides of the feet (what would pass for a "thumb" in a "normal" cat), is between the rest of the foot and his thumb, so when he scratches, it does not get stropped. I have to clip those two myself (which is not fun) to make sure they do not curve all the way around into his feet. I've considered having those two toes declawed, and in fact, if I lived in the UK, this would be the only circumstances under which I could declaw my cat, legally, and then only the affected toes.

Interesting, huh?
9. Why was polydactyly deliberately bred out of Maine Coons (a large cat characterized by its beautiful neck ruff of fur), despite folk belief that the extra toes acted as snowshoes and helped in hunting?


Answer: breed standards made no allowance for extra toes

Polydactyls made up about 40% of Maine Coons, but the trait was almost completely bred out, and only recently have attempts been made to recover it. Cat show associations still do not allow polydactyls to win awards.
10. Polydactyly can be found in large cats as well, such as leopards.

There have been photographs and reports of polydactyl leopards, although it seems to be caused by a different gene than that of the domesticated cats. There are also unconfirmed reports of unusually large, thumb-footed tigers, although these may be exaggeration.
Source: Author efvie 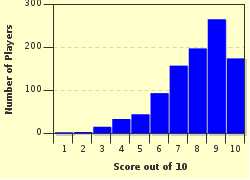 Related Quizzes
This quiz is part of series Allsorts of fun:


1. I Heard He's Not Even a Real Doctor Average
2. Polydactyl Cats Average
3. "Draft Dodger Rag" by Phil Ochs: Anatomy of a Song Average
4. Excuse My French Easier
5. That's a Bit Much... Average


Other Destinations
Explore Other Quizzes by efvie