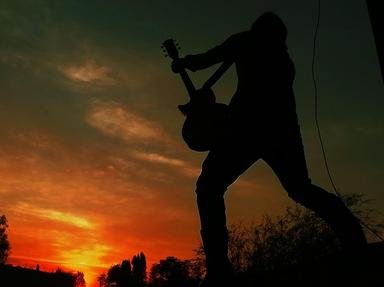 I share something with the music personalities who represent the correct answers. That one thing may, indeed, be the extent of what we have in common! We were all born in the calendar year 1954. (The only musical instrument I play is the radio.)

Quiz Answer Key and Fun Facts
1. He was born February 5, 1954 and may be best remembered as the drummer for the band, The Red Hot Chili Peppers, yet his talents are many and varied. He has earned tremendous respect for his work as a musical composer. Who is this American Aquarian?

Bronx (New York, USA) native, Cliff Martinez drummed for the bands Captain Beefheart, The Dickies, Lydia Lunch and The Weirdos before he joined the Red Hot Chili Peppers. It was as a part of RHCP that Martinez became a member of the Rock and Roll Hall of Fame in 2012.

After he left RHCP he did scores for movies, television series and commercials. Do you remember the super-sexy Lincoln commercials that feature Matthew McConaughey? The music featured in those commercials is from Cliff Martinez.
2. She was born the youngest of three daughters in March of 1954. Roughly, ten years later she and her older sister, Ann, watched the Beatles perform on television's "The Ed Sullivan Show". She has said it was at that very moment she knew what her career path would be. Indeed she must have known something - her band, Heart, has sold over 35 million records worldwide. Who celebrates her birthday the day before St. Patrick's Day (March 16th)?

Nancy Wilson is the younger sister and band member (the band Heart) of Ann Wilson. Both of the Wilson sisters have mentioned The Beatles were influential in their early musical aspirations. Both recall that they watched the Beatles perform on "The Ed Sullivan Show" and both remember they attended a Beatles concert in 1966. Nancy and Ann Wilson added hard work, determination and an opportunistic attitude to their musical talents as they progressed from background and demo-singers to award winning, world-wide rockers with their very own star on the Walk of Fame.
3. Ray Parker, Jr. was born May 1, 1954 in Detroit, Michigan and was employed as a session musician while he was still in his teens. He gained fame in the late 1970s and early 1980s as a member of the band Raydio but he may always be remembered for writing and performing the theme of an iconic 1984 movie that starred Bill Murray and Sigourney Weaver. Which movie theme song?

Few, if any, movie theme songs are more memorable than the song from 1984's "Ghostbusters". After all, "who you gonna call?" "I ain't 'fraid of no ghost". The song "Ghostbusters" spent three weeks in the number one spot (Billboard Hot 100, August 1984), was nominated for an Academy Award (Best Original Song) and was the subject of a very controversial law suit and counter suit between Ray Parker, Jr. and Huey Lewis.

In 2014 Ray Parker, Jr. earned his own star on the Hollywood Walk of Fame.
4. One life story that spurs the thoughts of "what might have been" is the one of the country music star who was born July 1, 1954. His career ended much to soon when he died at age 34. Which native of Kentucky recorded and had chart success in the 1980s with the songs "Miami, My Amy", "Don't Close Your Eyes" and "When You Say Nothing At All"?

Bluegrass legend Ralph Stanley has been credited with "discovering" the talent of the (then) teenage Keith Whitley. Whitley soon became one of the lead singers featured in Stanley's band (Stanley Brothers) but it would not be long after that until Whitley was a tremendous country music solo artist with at least five number one hits (according to US Billboard Country Music) of his own.

It is unfortunate Whitley suffered from substance (alcohol) abuse which had begun as early as his career in music did.

He died in May of 1989 from what was initially ruled as acute alcohol poisoning. At the time of his death he was married to another country super-star, Lorrie Morgan, and those two were planning to record an album of songs written by Whitley for Lorrie.
5. He is a native of London (England) and has enjoyed musical success as a singer and songwriter in a wide variety of genres. He is a Grammy Award winner who was born as Declan Patrick MacManus on August 25, 1954 and along with his band, the Attractions, became a member of the Rock and Roll Hall of Fame in 2003. We know him better as who?

Initially, Elvis Costello's musical inclination was described as "punk rock" and/or "new wave" but there is so much more to his talents. Truly a mercurial artist, his talents and style can not be unilaterally labeled. Costello has enjoyed chart success, global appeal and awards of honor for his songs as a singer, songwriter and producer.

His professional name has been credited to a combo of the name his father used as a jazz musician (Costello) and a nod to the King of Rock and Roll, Elvis Presley. Two fun facts about Costello: He married singer Diana Krall - at a home owned by Elton John - in December of 2003. And, he once hosted "Late Show with David Letterman" as a guest host when Letterman was absent due to an eye infection.
6. This musician should be well known to fans of the rock band Van Halen. He was featured as singer and guitar player with them for a more than twenty years. The Indiana native has enjoyed definite success as a solo performer - apart from Van Halen - as well. He was born October 10, 1954 and he may have told you, "Eat 'Em and Smile" in 1986. Who is he?

The 1983 edition of "Rolling Stone Record Guide Vol. 2" described Roth as "the most obnoxious singer in human history, an achievement notable in the face of long tradition and heavy competition." Still his wit can be appreciated in the following quote attributed to him: "Money can't buy you happiness, but it can buy you a big yacht so you can drift up next to it and offer it a drink."
7. He is the Adam of the English rock band Adam and the Ants. From many accounts his personal life has played as dramatically as have his musical aspirations. His publicized bouts of depression and manifestations of a bipolar condition have often overshadowed his musical talent. What was the birth name of "Goody Two Shoes" singer?

The singer and performer the world has known as Adam Ant was born Stuart Leslie Goddard on November 3, 1954 in England. At a very early age he sought solace in music and other areas of the fine arts as an escape from his troubled home life. Records have sold well for Adam and the Ants and for Adam Ant, the solo artist.

His musical style has been described as punk rock, post-punk and new wave. Some of his more successful songs have been: "Stand and Deliver", "Prince Charming" and "Goody Two Shoes".
8. This future Grammy Award winner was born November 8, 1954 near Chicago, Illinois but would find her earliest musical recognition almost twenty years later when living as a penniless runaway near Los Angeles, California. Her name was within the top thirty of those names listed by VH1's 100 Greatest Women of Rock and Roll (in 1999). Whose self-titled album was released in 1980 and included the songs: "Chuck E.'s in Love", "Weasel and the White Boys Cool" and "The Last Chance Texaco"?

When first hearing the musical sound of Rickie Lee Jones one may be tempted to say, "She sings folk music". Or, "She sings pop songs." But it would be impossible to put one label on her musical style and talent. Her range and appeal does include those two (genres) but many of her fans have also been fans of rock, jazz, soul, R&B, blues and country music, as well. Rickie Lee Jones has said her favorite hobby is gardening and supporting causes that have been described as "left-wing".

Her duet (with Dr. John), "Makin' Whoopie" was a part of the movie soundtrack for "Sleepless in Seattle" (1993).
9. The unmistakable sound of this singer and musician has been apparent whether he performed as a solo artist or the member of a group. He toured as a member of the Grateful Dead, The Range, The Noisemakers and with Ricky Skaggs. He has played piano, keyboards, accordion and the mountain dulcimer. No pigeonholing this Virginia native who was born November 23, 1954; who is he?

It would have been difficult to imagine any career for Bruce Hornsby other than music, yet at one time he aspired to play basketball professionally. Hornsby has told stories about the times he played (and, won!) one-on-one (basketball) against NBA great, Allen Iverson.

As for his musical style, wikipedia described it this way: "Hornsby draws frequently from classical, jazz, bluegrass, folk, Motown, gospel, rock, blues, and jam band musical traditions." Hornsby summed it, simply, with this comment (taken from an interview that appeared in "Billboard Magazine" in 1995): "I have never been easily slotted". Touché!
10. Described as a gifted and powerful singer, VH1 once labeled her the "Greatest White Soul Singer Alive". While that may have been true, it echoed only one aspect of this amazing woman who was born Christmas day in 1954 near Aberdeen Scotland. Whose voice do you hear in the songs "Sweet Dreams (Are Made of This)", "Here Comes the Rain Again" and a 1995 cover of Procol Harum's hit, "Whiter Shade of Pale"?

Annie Lennox was born December 25, 1954. She has mentioned that as a child she was not interested in sports nor was she particularly gifted academically but music and performing seemed to come very naturally to her. She has sold over 80 million records worldwide, has won many, many music awards including BRIT Awards, Grammy Awards, MTV Awards, and American Music Awards, to mention only a few. Lennox was described by wikipedia as singer, songwriter, political activist and philanthropist.

Indeed, her philanthropic work as earned her much recognition.

Her tireless humanitarian work - primarily for human rights and health care - did not go unnoticed. Lennox became an Officer of the Order of the British Empire (OBE) from Queen Elizabeth II in June of 2011.
Source: Author cowboybluedog